While I realize I may have pigeonholed myself into a corner with the title of this blog, there are times I'd like to venture outside of the Disney parks. I know this may not interest a majority of readers who simply tune in because of the Disney connection, but hey, it's my blog and I'll post what I want to! Plus, I'm visiting family in Connecticut and NYC for a few weeks, so you get what you get, k?

If you're still reading, I'll try to tie this in with Disney in some way. But that'll come toward the end of the post.

I love New York City. It's got history, culture, variety, and it has an energy to it that I can't put into words. Uptown, downtown, westside or east side-- I love 'em all. 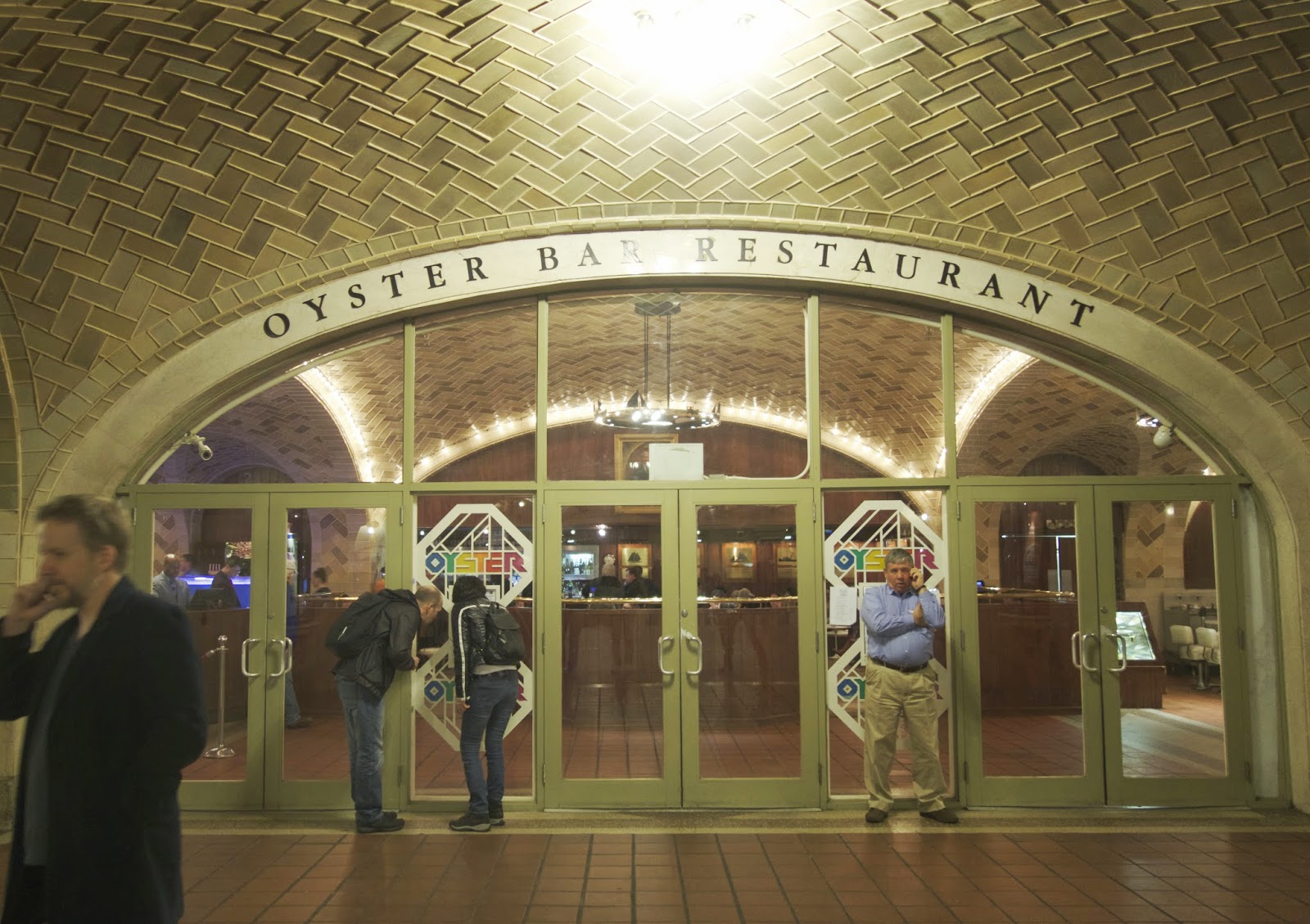 One of my favorite spots is the Grand Central Oyster Bar. It may be a tad touristy, being right in the middle of Grand Central and all, but it's smooooooth. This historic space opened in 1913, the same year that Grand Central re-opened into the opulent space we know and love today. The country was on the cusp of WWI. While the restaurant itself has gone through a few changes, the architectural elements and cove-like setting make you feel like you've stepped back in time.

My mom and I recently visited before catching a train back to Connecticut after a day of wedding dress shopping in the City (and I said YES to the dress!!) 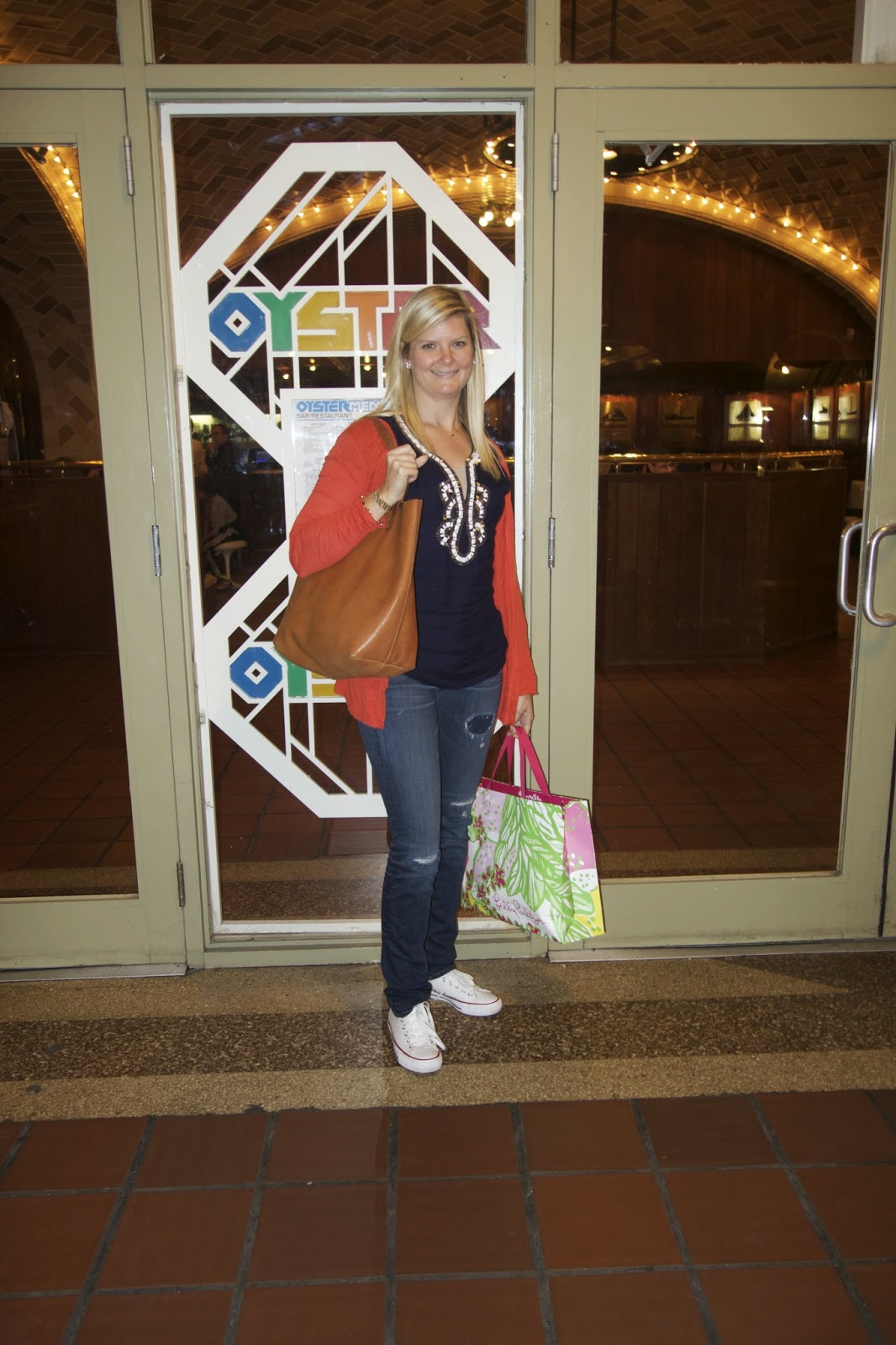 I don't claim to be an expert, but I do know a bit about where the cool kids sit when visiting the Oyster Bar. There are essentially five different seating areas; the main dining room, the lounge, the low countertops, the high top oyster bar, and the saloon. I'll show photos of each space, as well as a little info and comparison to their Disney counterpart.

Disclaimer: the servers here are a bit curt. They're not exactly Disney style, and are often missing warm smiles, small talk, and general patience. It can be a bit off putting, especially to someone who's accustomed to Southern hospitality like I am. But they know their stuff. Any server can tell you about every wine on their exhaustive wine list, as well as every oyster.

Upon entering the restaurant, the main dining room will be off to your left. This is where the tourists typically sit. My mom and I sat there on this last visit, as we've never done so before. It's also the only area that has booth seating. It's light, bright and very open. But like I said, it's where all the tourists sit, which is perfectly fine. Kind of like the Electric Umbrella in Epcot. If you want street cred, go a little deeper. 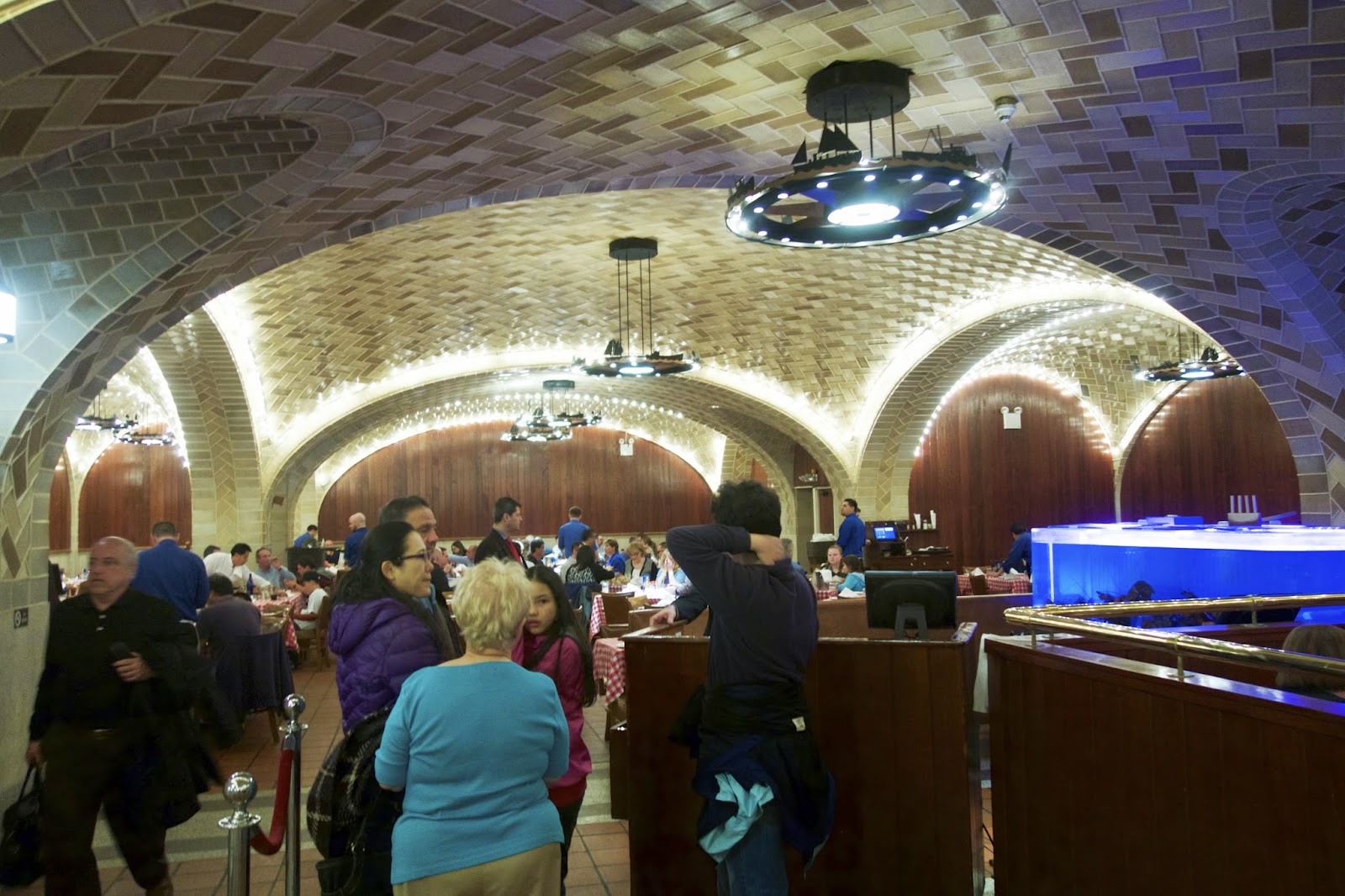 Looking in to the main dining room from Grand Central terminal. 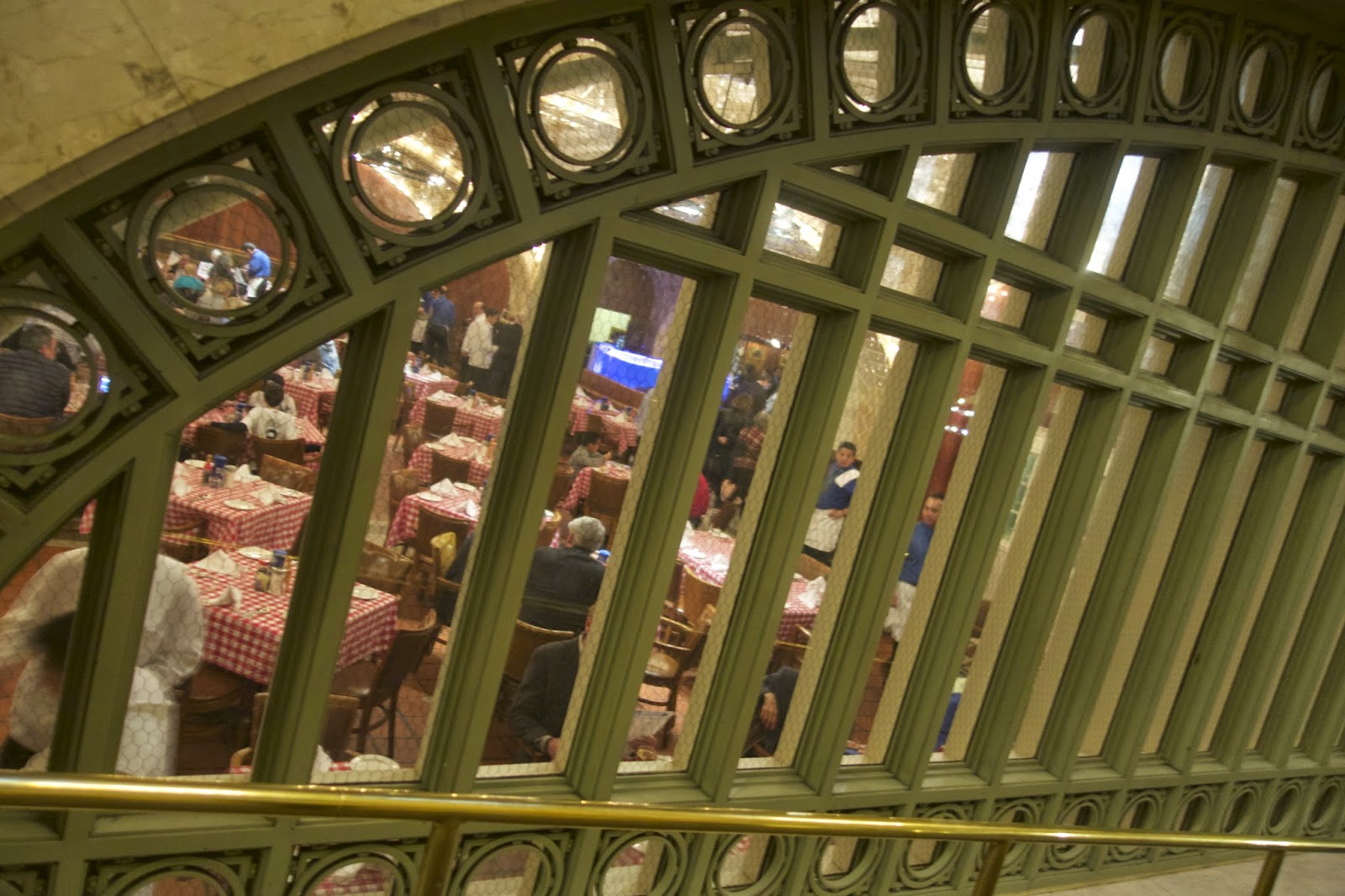 Still standing at the entrance, the lounge seating is directly in front of you. I don't know much about this area and have never sat here. I think a lot of people assume it's simply a waiting area and don't know you can actually order and eat here. It kind of reminds me of the little seating area next to the Rose & Crown, across from the bathrooms. Unless someone else is sitting there, people assume it's closed off and don't venture to it. 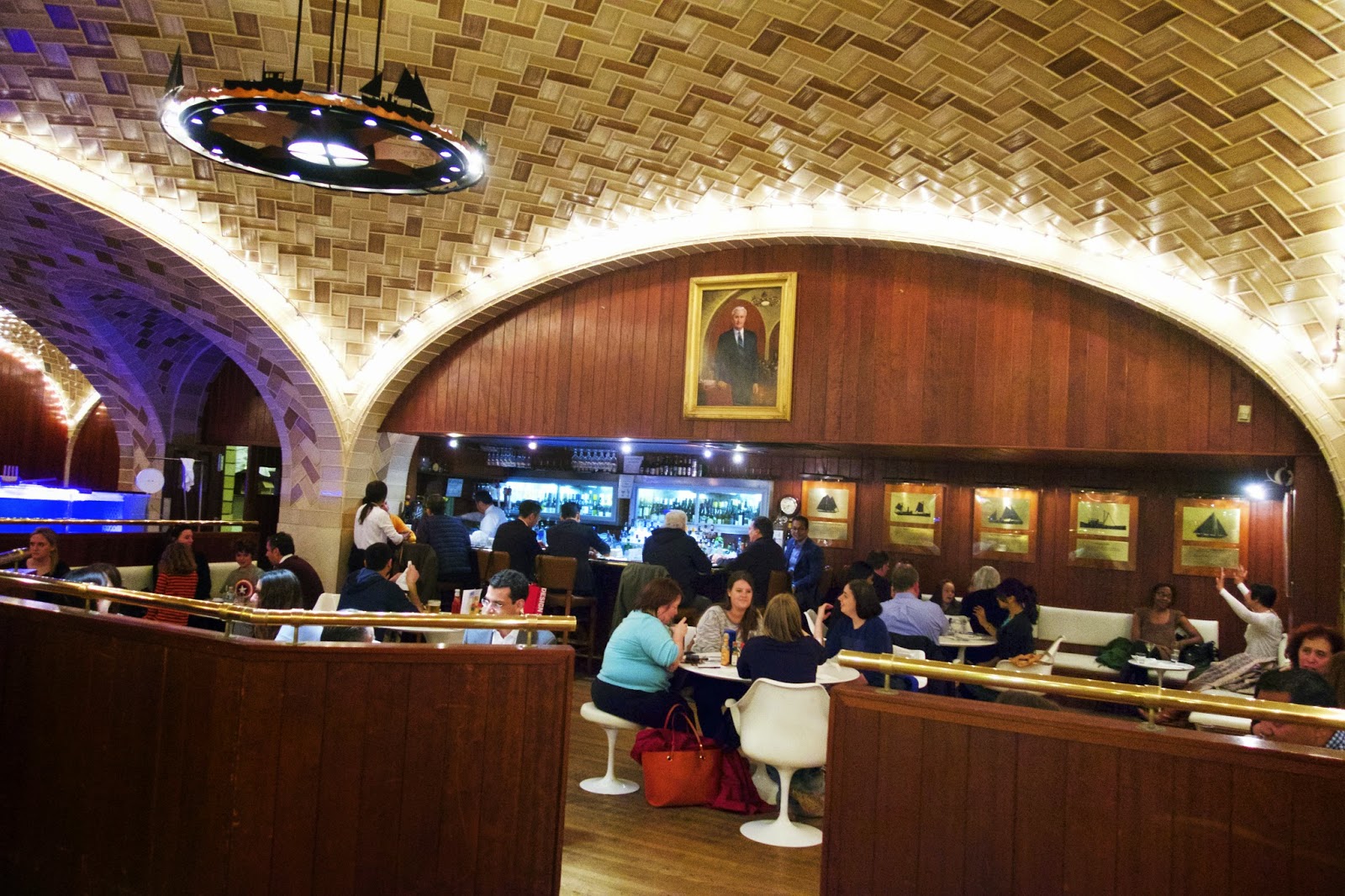 Turning to your right, you'll see two options. The most obvious is the low countertop seating. This is a pretty hip space to sit. You'll have to befriend whoever sits around you, but that's part of the fun. Same surly service, but a pretty authentic New York feel. I'd liken this to the bar side seating at the Dawa Bar. You know when you sit there, whoever else is there is in the know, and probably pretty cool. 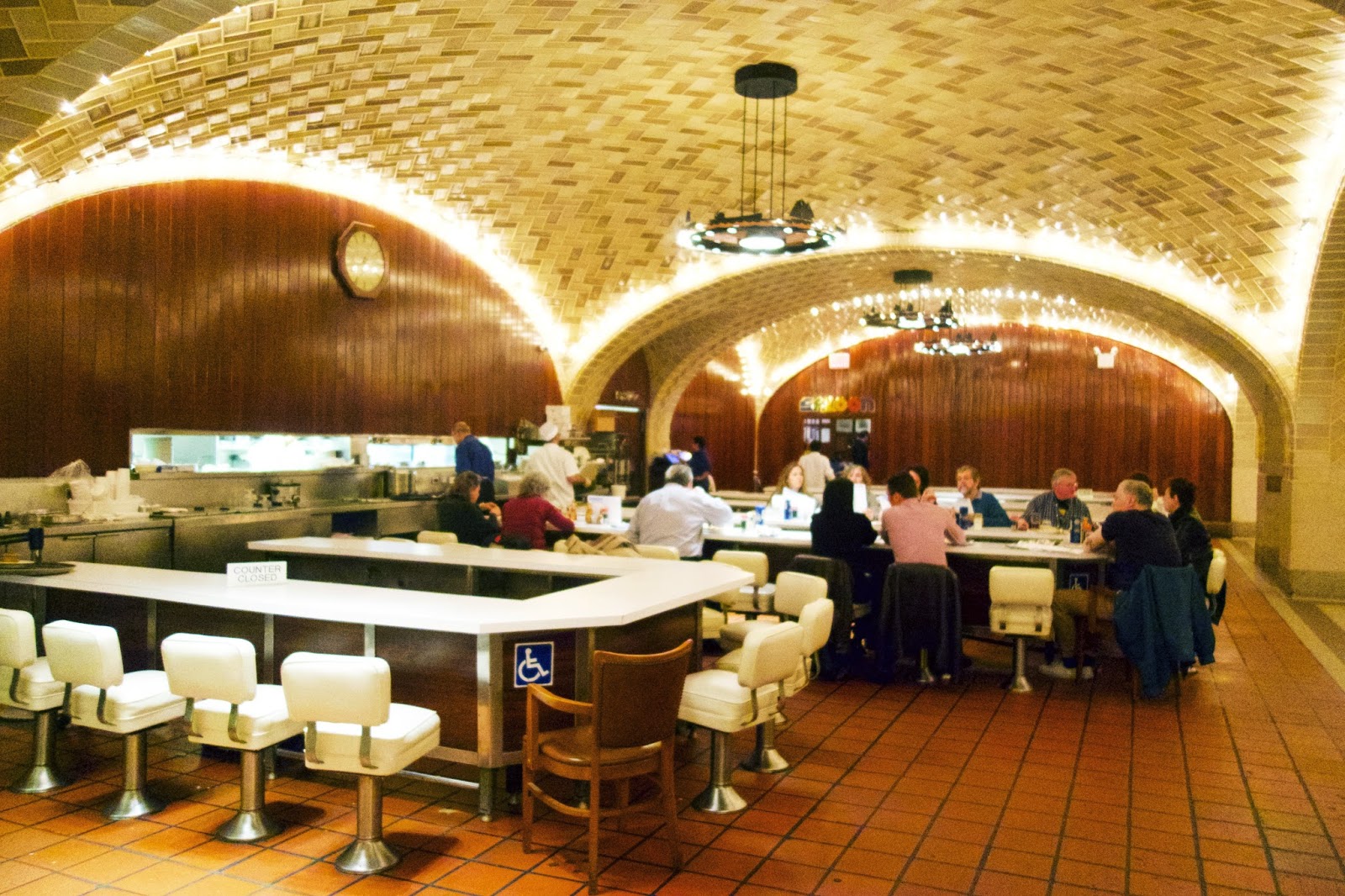 The other option, and the creme de la creme of cool kid seating is at the high top oyster bar. This is where the magic happens. You can watch the guys shucking oysters, and the same fella has been manning the soup steam pots for years. He's got a crazy look in his eye, and is often found talking to himself, but he makes a mean cup of chowda'. This spot fills up quickly and stays packed, but it's worth it to wait for a seat. No frills, no smiles, just damn good food. Pair a dozen oysters and a vodka martini with this spot, and I'm in heaven. This is also where Julia Child sat in 1937 and watched the soup masters before perfecting her recipe for oyster stew. I liken this spot to either Mizners or the bar at Yak & Yeti; Mizners because it's my favorite in-the-know spot, and the bar at Y&Y because it's pretty cool just to stroll up past the crowds and sit at a good spot. 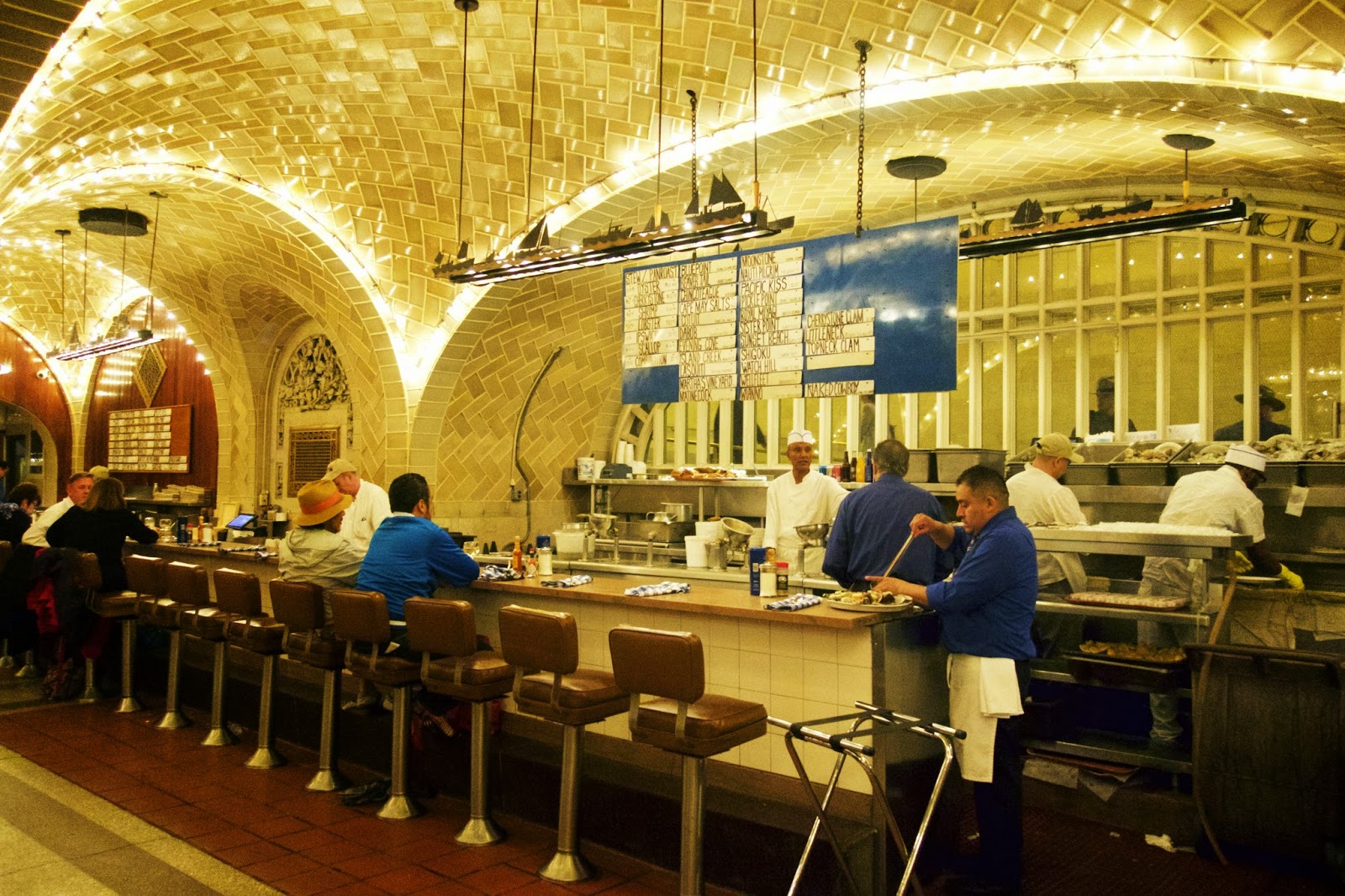 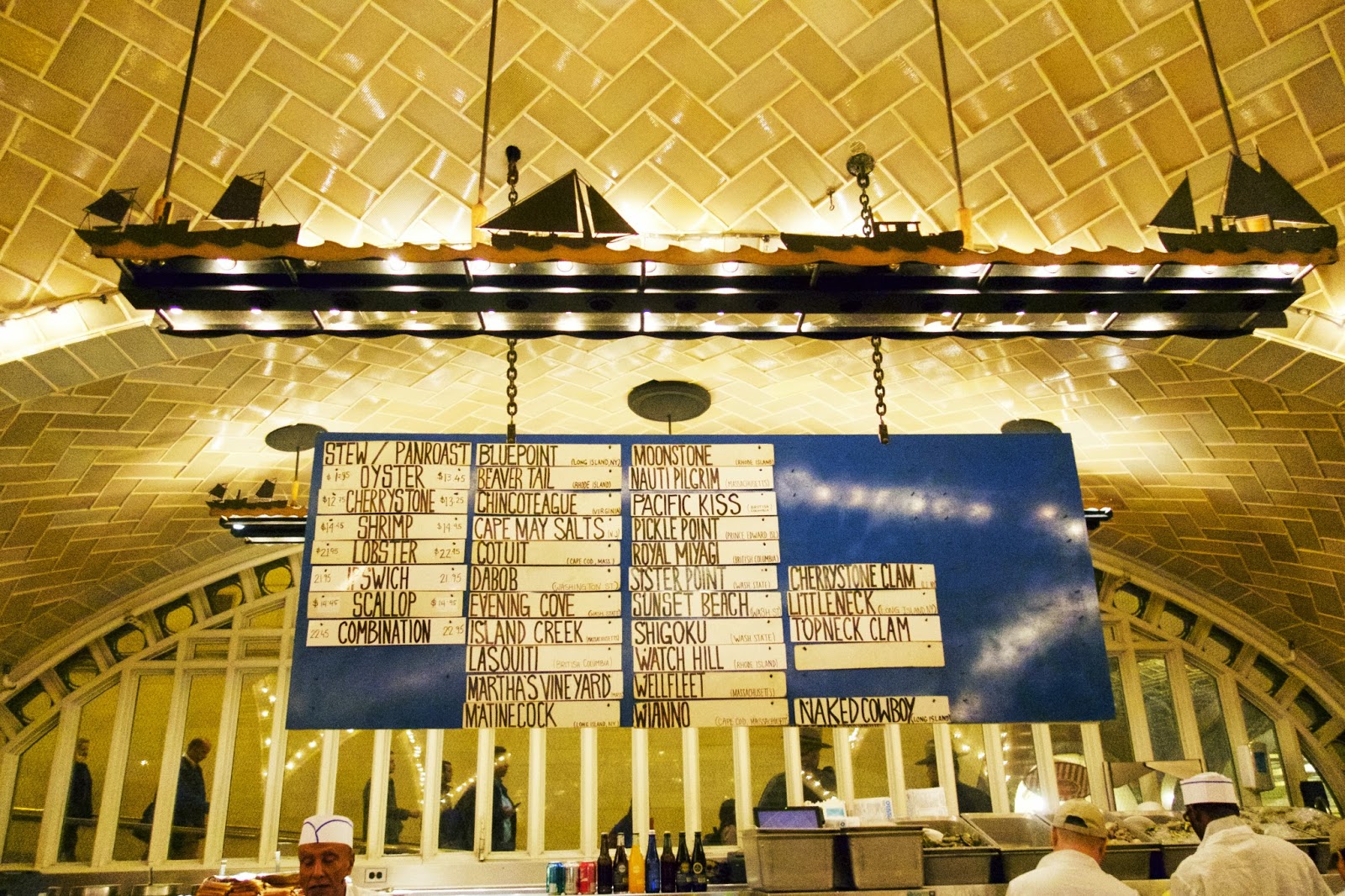 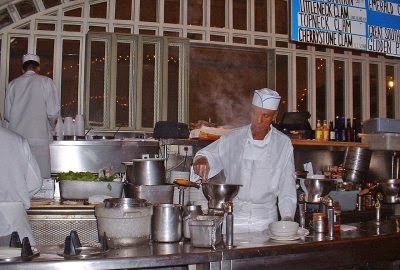 If you venture further back, you'll spot the Saloon. This is the spot where the nine-to-five suits congregate for a drink or two before getting the train home to the suburbs. Sounds very Mad Men-ish, no? If you're going to sit at a traditional table, this is the place to do so. It's a bit more lively than the main dining room (read: noisy), but is cozy and tucked back into a warm corner of the restaurant. It's also closest to the bathrooms. This reminds me of La Cava de Tequila or the Wine Bar in Italy as it's small but fun. 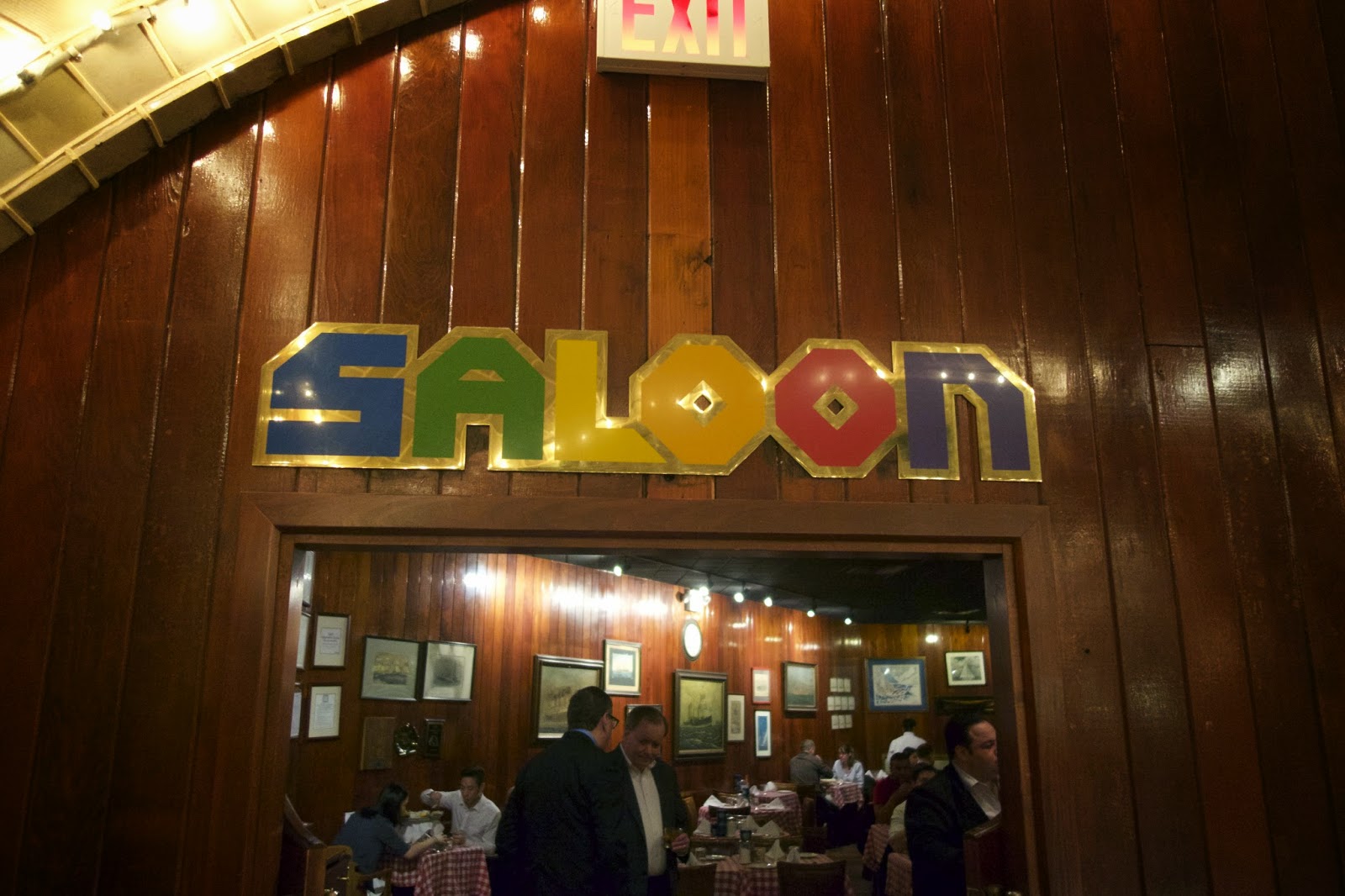 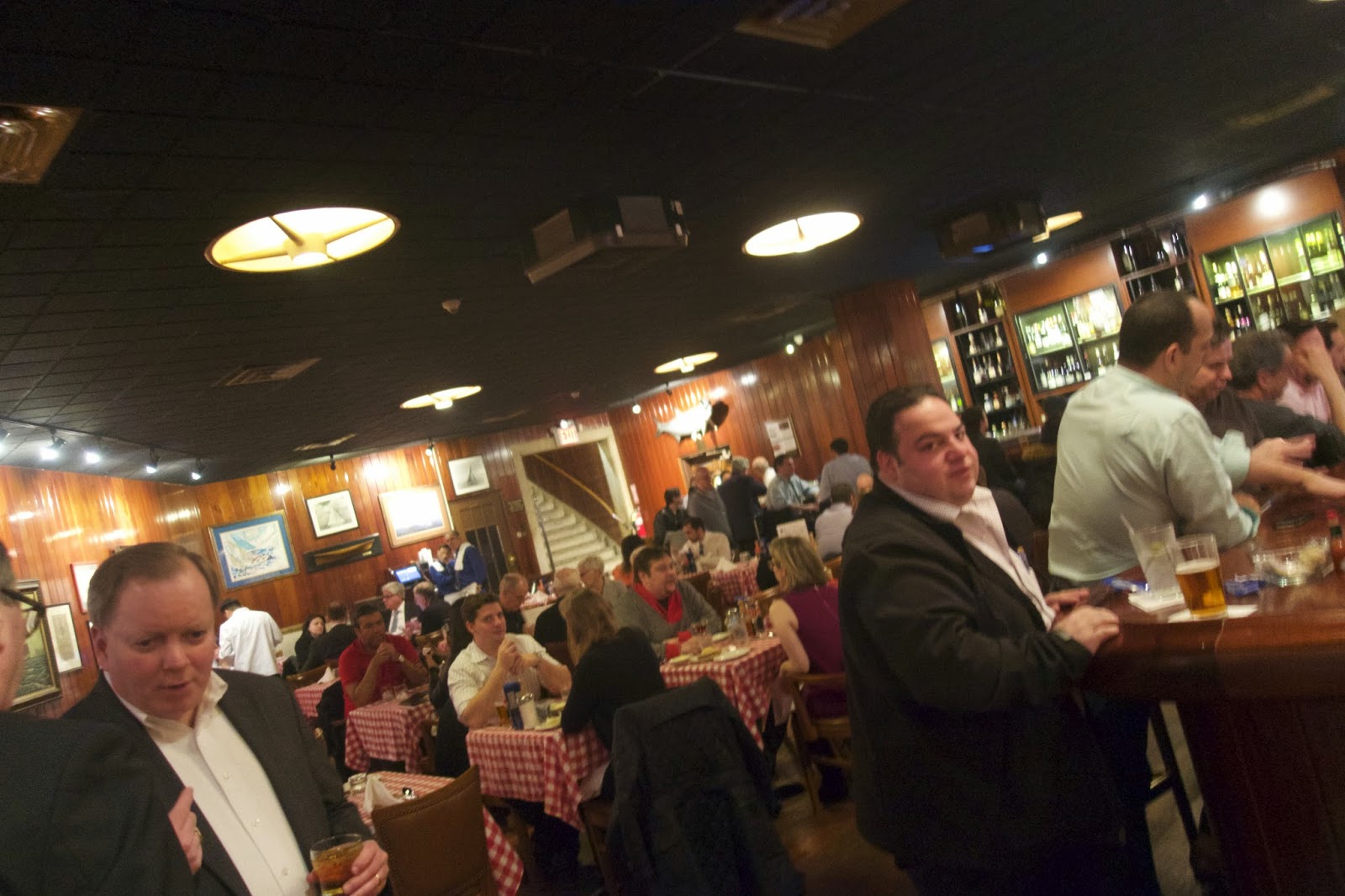 Now on to the eats.

While the majority of the menu is seafood based, there are a few options for land lubbers. But the real draw here are the oysters (duh). The restaurant always houses at least 20 different kinds of fresh oysters. As you can see, the menu is extensive. The wine list is just a big, with one side featuring whites and the other featuring reds. 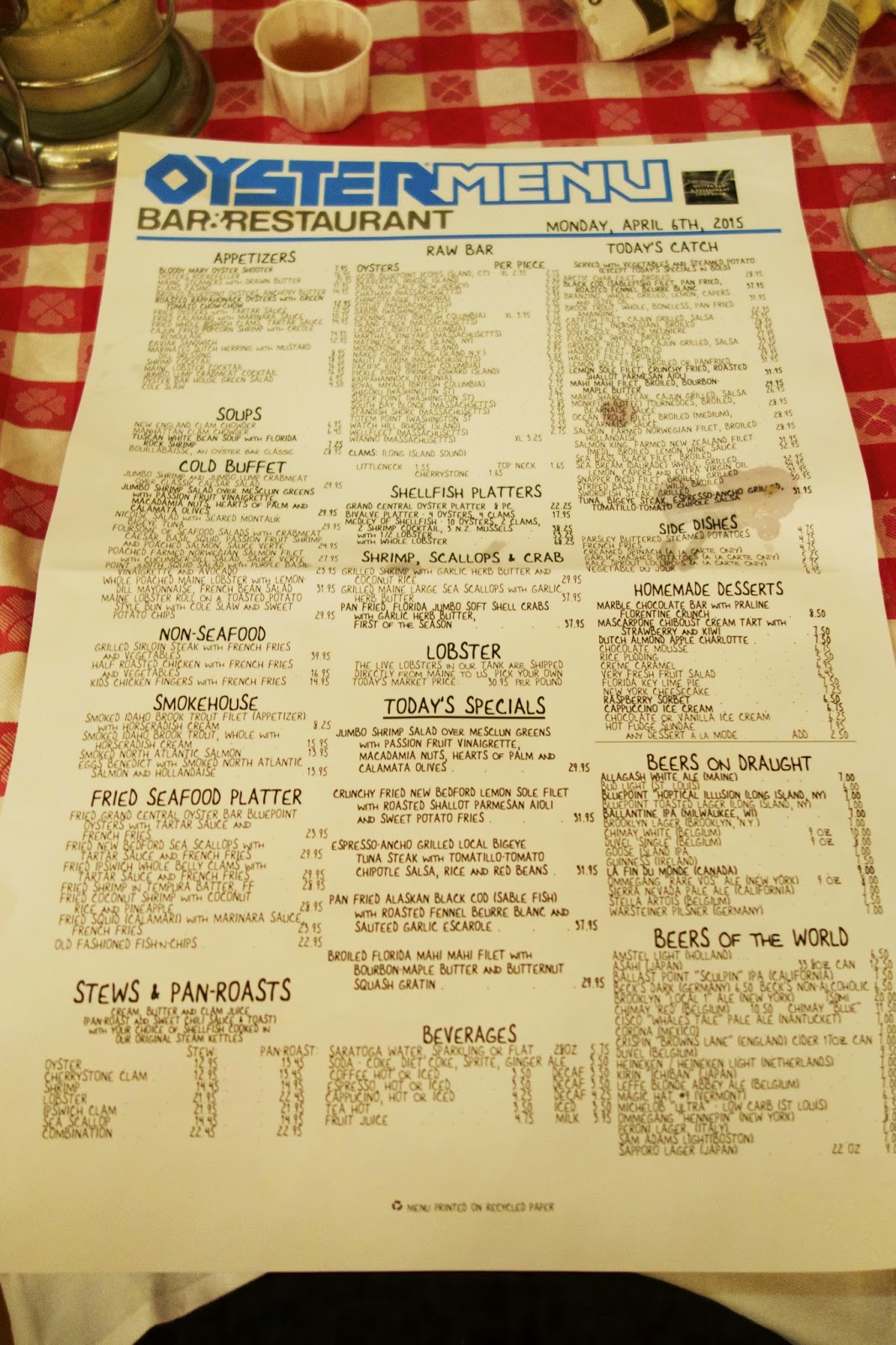 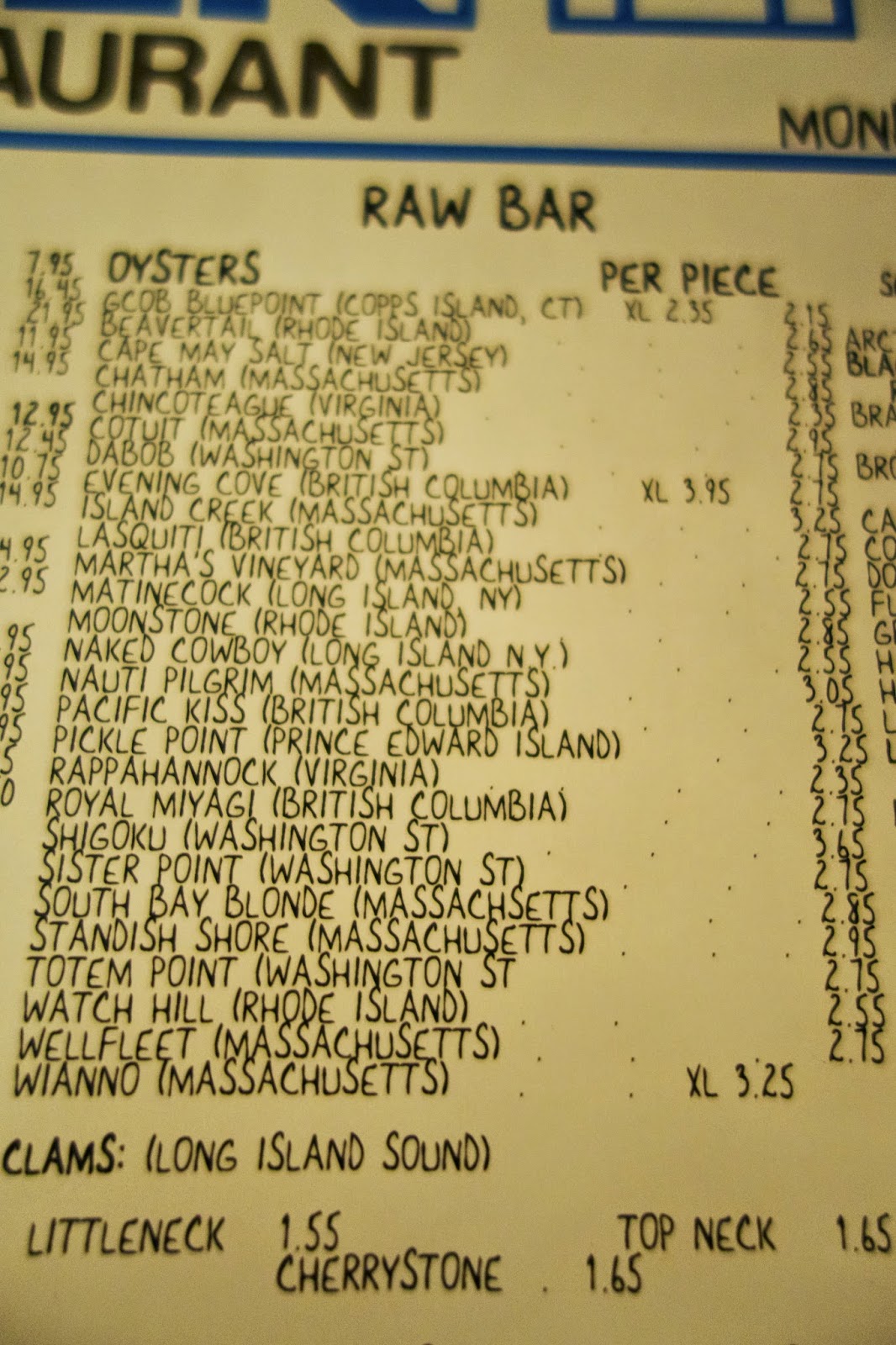 I'd never pass up a chance to get the New England clam chowder, and my mom and I split a bowl and a house salad. A small bread plate is served when you sit down, consisting of one sweet biscuit, one traditional dinner roll, and several pieces of crisp flat bread topped with a variety of seeds and spices (think of an 'everything' bagel).

Any kind of oyster you want, it's here. I prefer small, firm oysters from the West coast, with my favorite being Kumamotos. Those weren't in season, so our server suggested a few others to try from that region. Mom and I both started with a dozen Shigoku. They were wonderful, nice and meaty. I forgo the cocktail sauce and eat mine with a squeeze of lemon, a dollop of horseradish, and dipped into the mignonette sauce. Slurp! 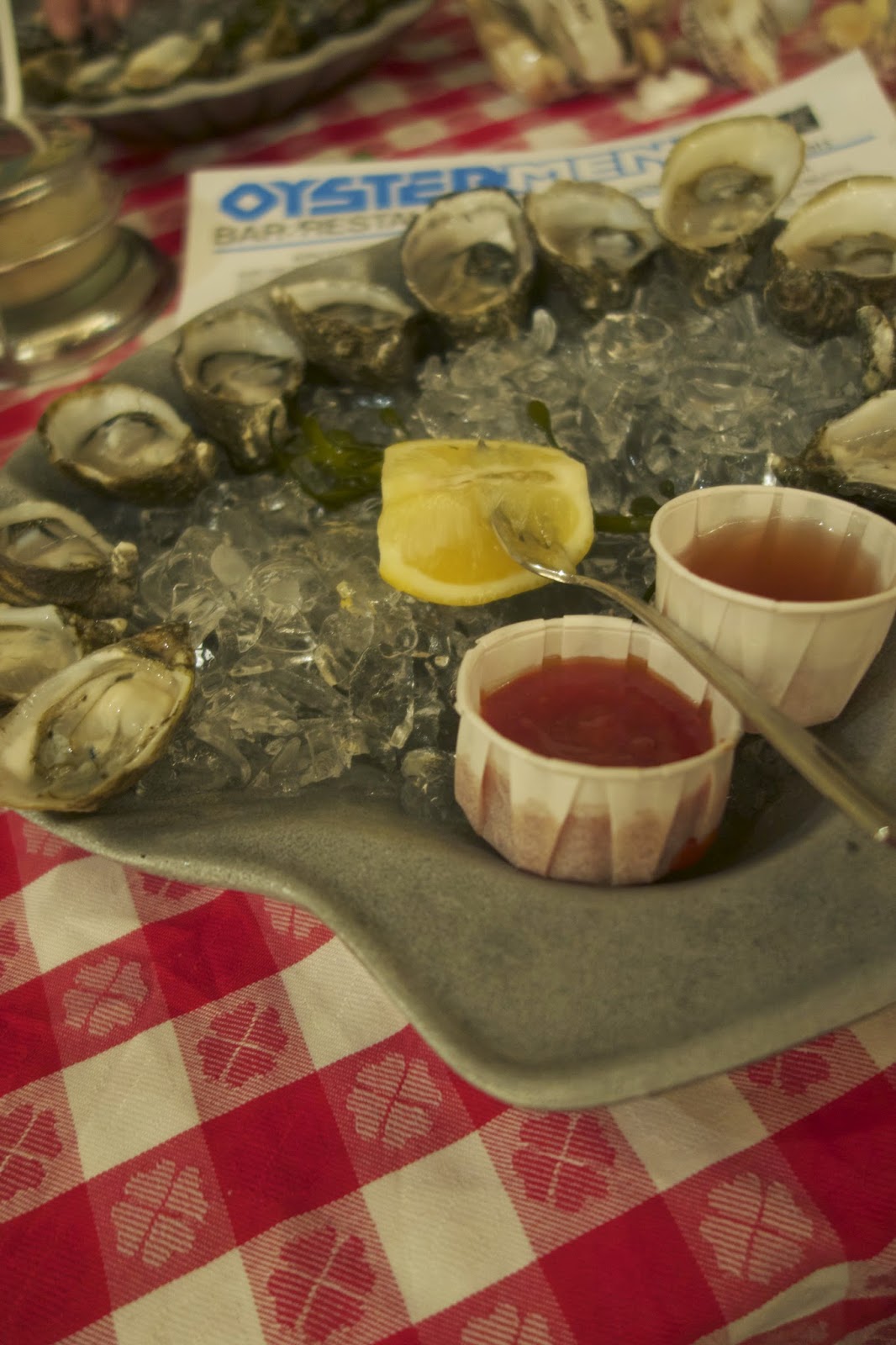 After polishing off a dozen of these bad boys, I was eager to try some others. There were four varieties from Washington State on the menu, so I asked for three of each, totaling one dozen (yay maths!). We also ordered some French fries, because oysters and fries go together so well. No really, they do! 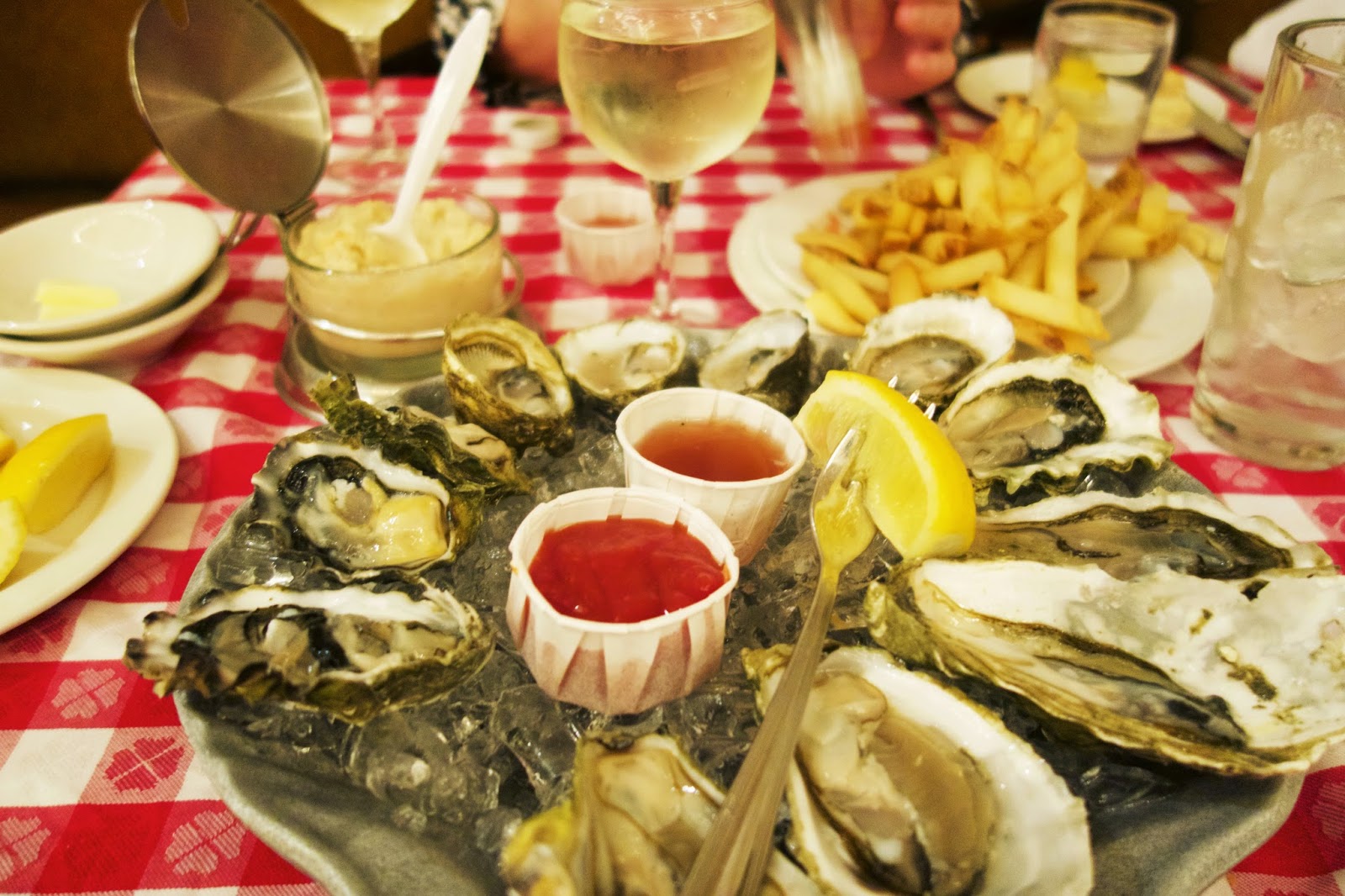 Now on to the Disney connection. Let me be clear, I'm completely assuming, but I can imagine Walt meeting business clients here to talk shop about he 1964-65 World's Fair that was held a short train ride away in Queens, NY. Perhaps he got a table (more practical for talking shop), ordered a drink and a bowl of oyster stew, and dreamed up ideas that made their way into one of the four iconic Disney attractions at the NYWF. I don't know, it's a stretch, but a girl can dream. After all, oyster stew was on Walt's list of favorite foods. 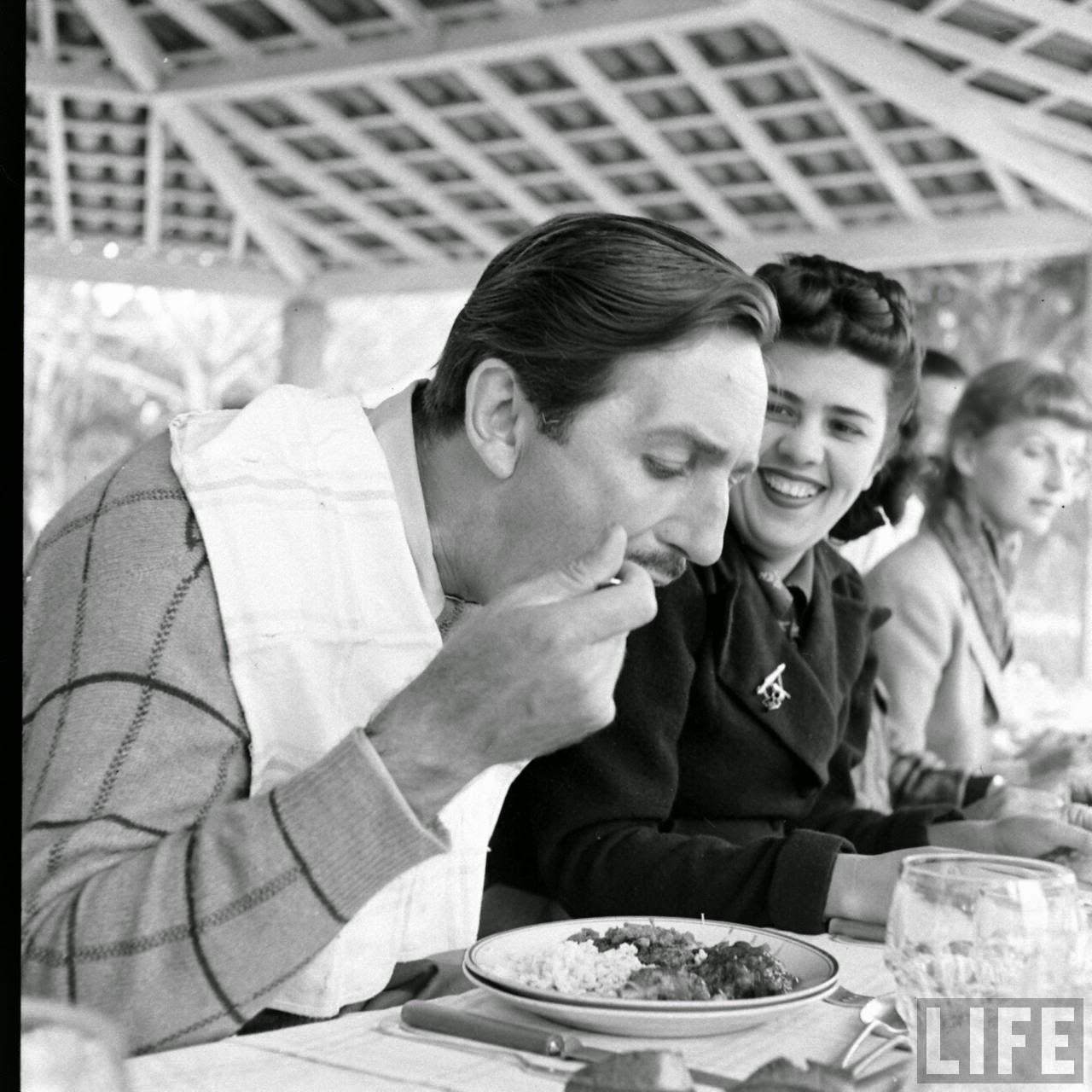 Hope you enjoyed this venture beyond the Disney gates. I'm going into the City again in a few days and plan to visit the Disney Store in Times Square; I'll report back on that in a post that should hopefully appease my die-hard Disney readers. Until then, cheers! 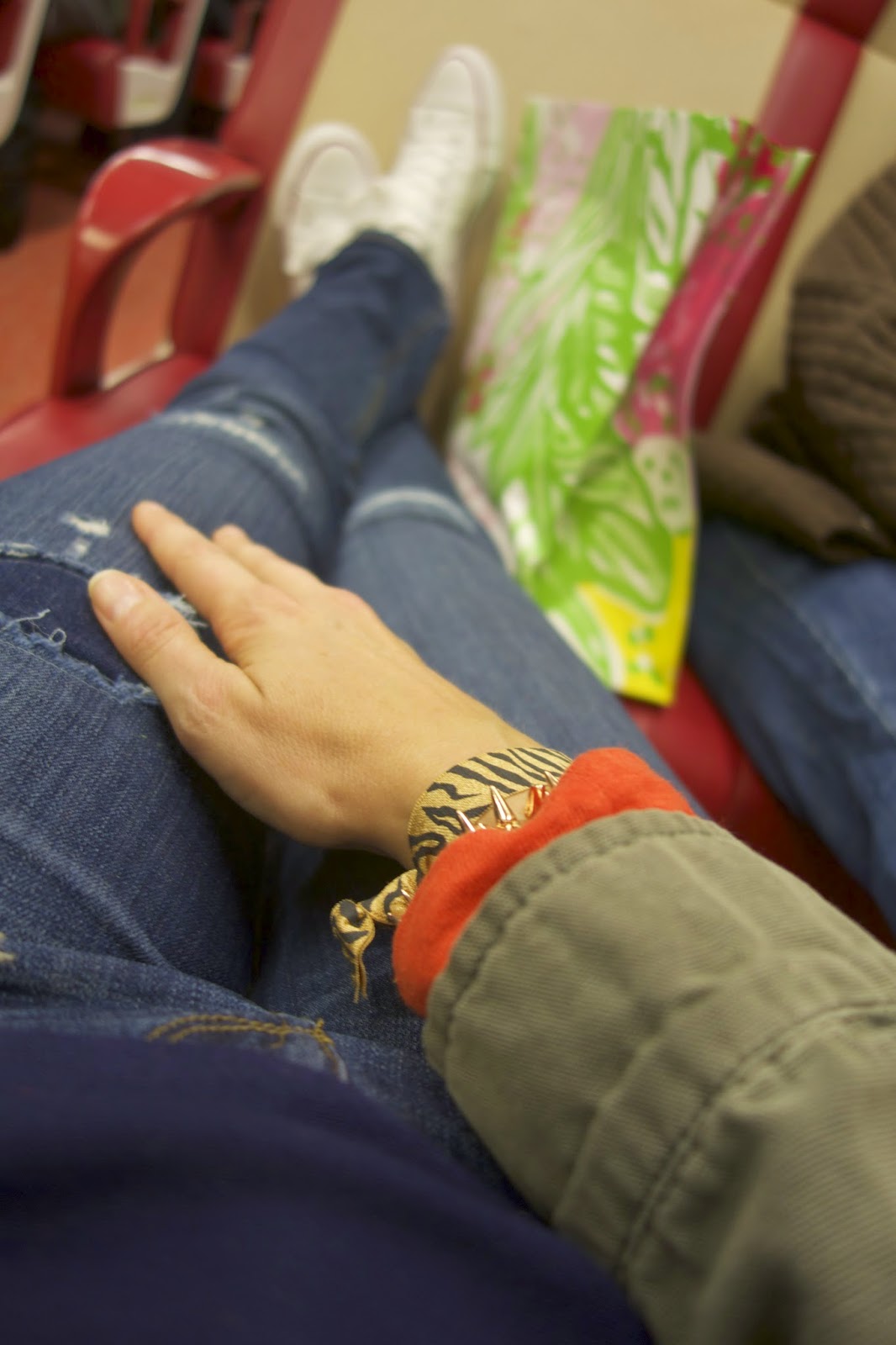 Posted by Dressing for Disney at Wednesday, April 08, 2015