My head's still spinning from the recent D23 Destination D: Attraction Rewind weekend, but I wanted to quickly pop over to let you know about two collaborations that I think are the bees knees. 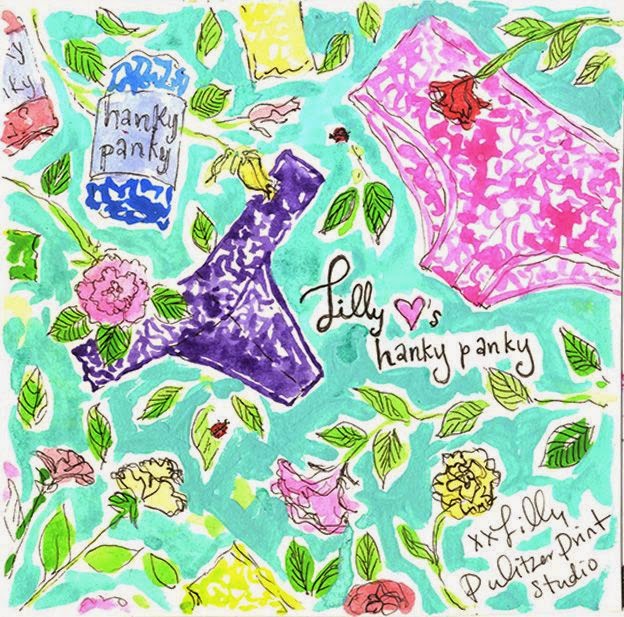 The first is that of Lilly Pulitzer and Hanky Panky. Now the challenge comes in how to make this relevant to this Disney-centric blog, but to be honest, Hanky Panky IS the brand of undies I prefer to wear to the parks, so *perfect*! 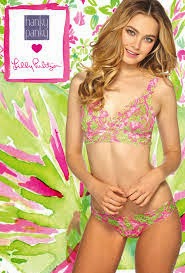 If you've read this here blog long enough, you know I'm a big fan of Lilly's punchy prints. And as far as underpinnings go (which we've discussed once in this post), I prefer to wear Hanky Panky when park-touring. They're comfortable and don't show under anything I choose to wear. I especially like this style- the cotton jersey 'middle section' wears comfortably throughout the day, and doesn't rub the way the all-lace styles can.

I'm not sure what exact styles will be offered in Lilly prints, but I do know that the line will feature 11 different styles that will include both underwear and daywear. 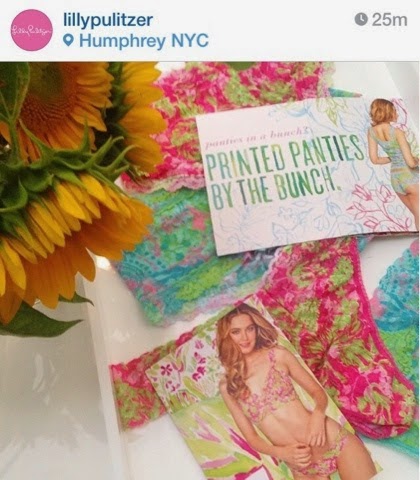 The other joint venture that has me excited is that of the Walt Disney Company and Turner Classic Movies. Um, I love old movies. And Disney. And MGM (yes, I'm one of the few. It's a toss up between that and Animal Kingdom for my favorite park.) So you can imagine my excitement when my Twitter feed started going nuts over the news that TCM was going to sponsor the Great Movie Ride, and show classic Disney films, animation, and television shows in a periodic programming block titled, "Treasures From the Disney Vault." 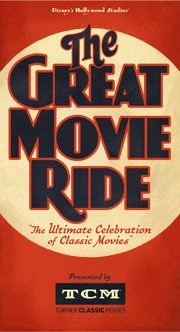 Read more details for yourself here! It's slated to officially be announced tomorrow, so we'll all have more details then.

SO -- you'll find me at MGM even more than usual in the next month or so, getting my fill of pre-TCM GMR before it begins changes in early 2015 (while eagerly awaiting what's to come)!

In the meantime, mark your calendars to enjoy these two collaborations:

Sunday, December 21st at 8 PM on TCM for the Disney + TCM initial showing of "Treasures From the Disney Vault."

Posted by Dressing for Disney at Wednesday, November 26, 2014 23 comments: 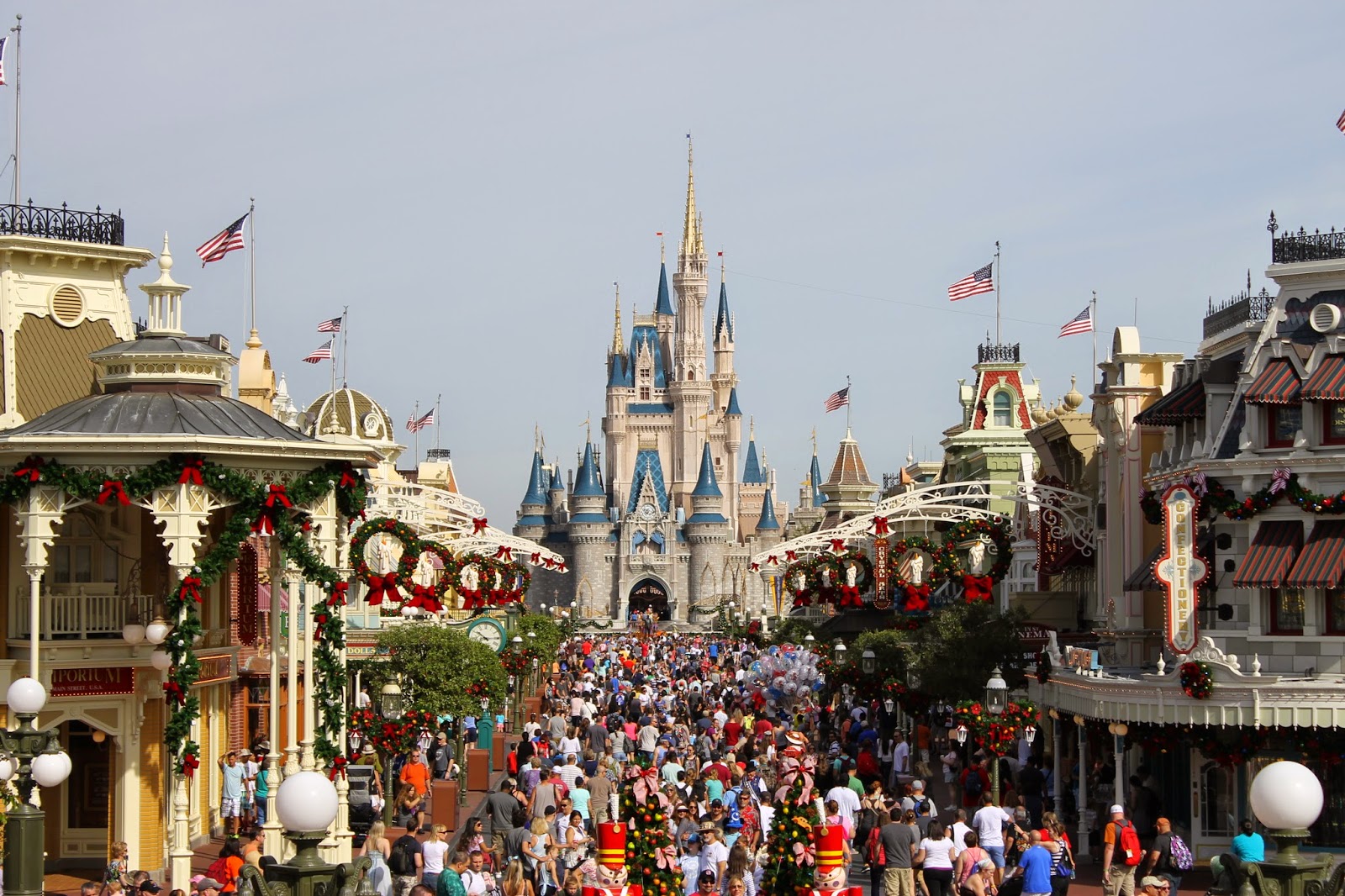 We may have just flipped our calendars to November, but the Holiday Season is in full swing here at Walt Disney World. And I'm okay with that. I used to be one of those staunch 'only decorate for Christmas after Thanksgiving' type of people, and still won't put Christmas stuff up in my house until then. But as far as Disney goes, I say bring on the Christmas. Here's my reasoning: this time of year really flies by so fast. Every year, *BAM* it's December 26th and we're left wanting more! So, why not start now and get two solid months of holiday merriment? Bah, humbug? I think not. 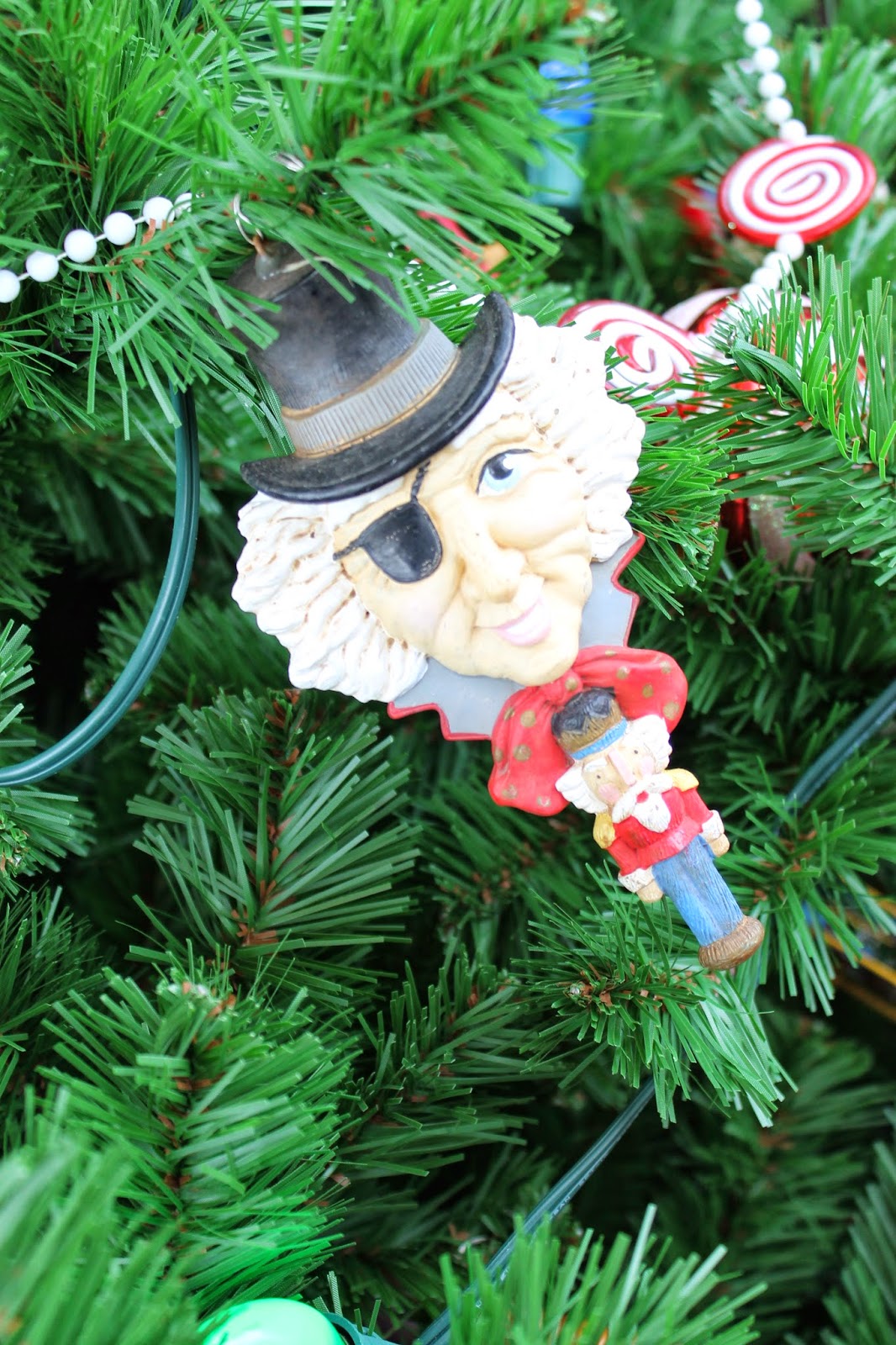 I have to thank Estelle from This Happy Place Blog for the inspiration for this particular post after she, ironically, wrote about being in a blog funk and looking for inspiration herself. She also did a post about packing for the fluctuating Florida fall forecast (say that five times fast!) that kindled this post idea, too.

Before we dive into the meat of this post, let's touch on the anomaly that is Florida fall (and winter, and spring) weather. If you make a trip to the World in October through March, chances are you will run the gamut from hot to cold, often in the course of one day. It can start in the low 50's in the morning (because you ARE rope-dropping, right? Have I not taught you anything?!), warm up into the 70's during the afternoon, and be back in the 50's when the sun sets. Then, the next day, the high is 83. Trust me, this all happened this past week. It can be a challenge to know how to pack or dress for such.

Aside from this post I did a while back, another article of clothing I've found that bridges this gap quite nicely are these relaxed linen pants from Roxy. I own them in blue, black, and turquoise. They have a drawstring waist, pockets, and are comfy yet stylish. They also offer enough leg coverage for the cool mornings, but are breezy enough when the temperature starts to rise. Pair these with a tank or tee and a cardigan, or a long sleeved tee and a lightweight scarf, and you're good to go. Here are some ideas:

I wore exactly this on my most recent visit to the Magic Kingdom to check out the holiday decorations, and it worked like a charm. 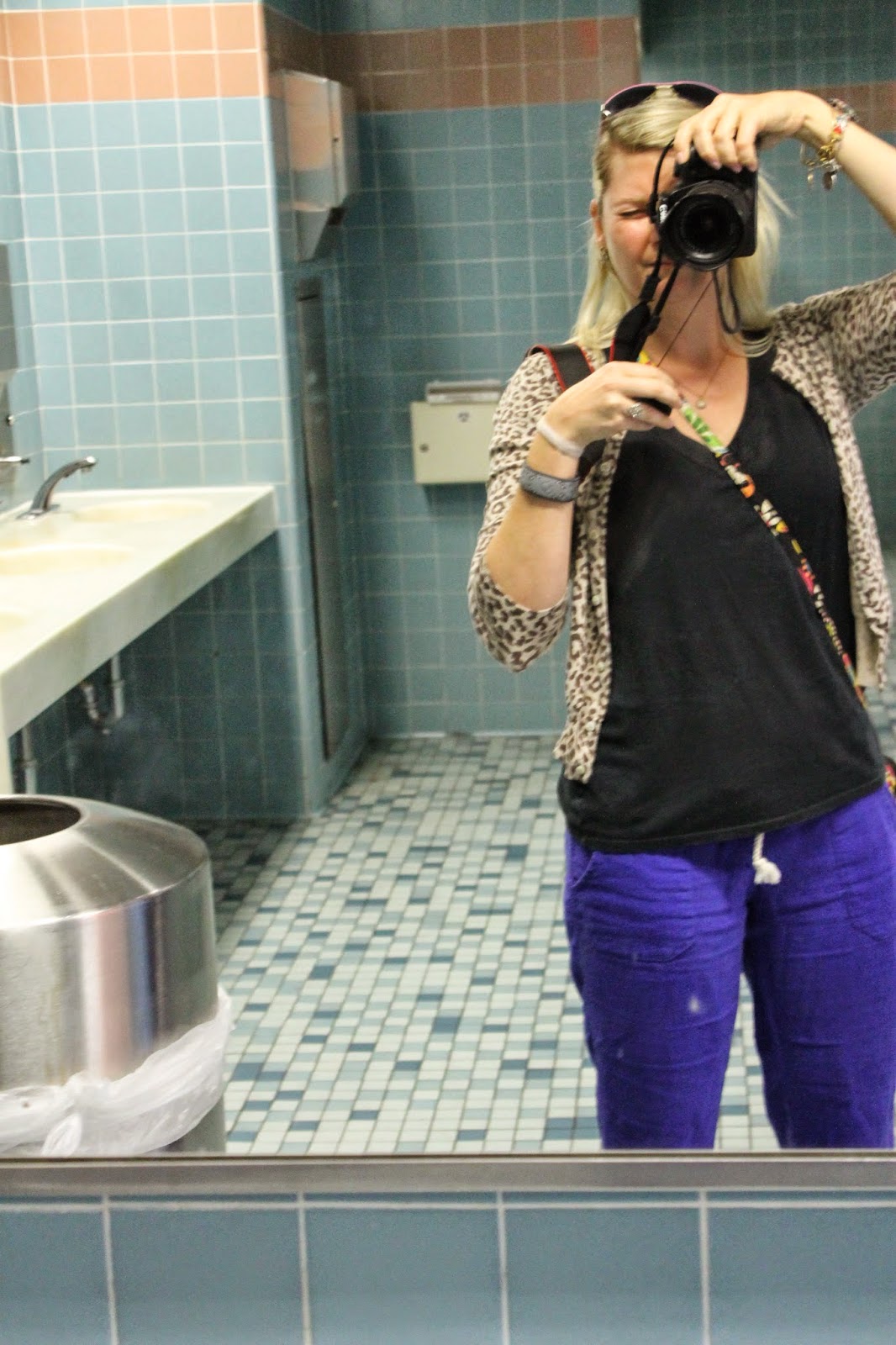 J.Crew Cotton Cardigan // James Perse Short Sleeve V Neck Tee (I know this is pricy for a t-shirt, but I've had this particular shirt for over 5 years, and it has retained it's shape and color// Roxy Oceanside Wide-Leg Pant (currently on sale from $39 to $24.99 through 11/8) 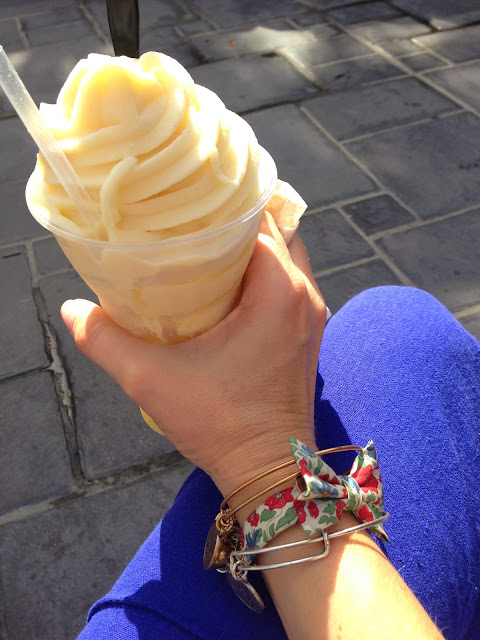 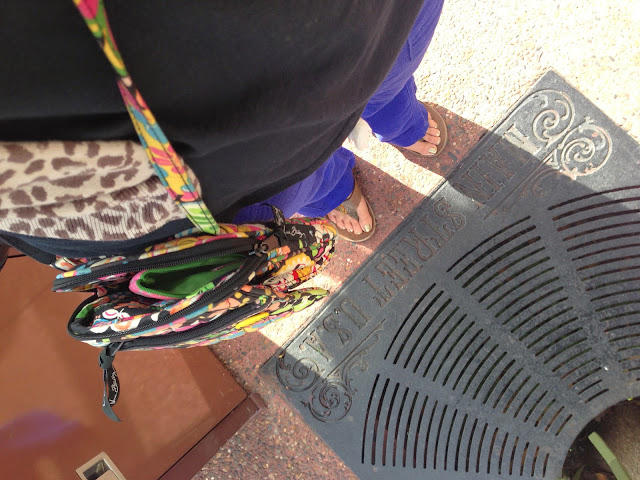 These pants are the best-you can order online or find them in most surf shops. I've actually gotten all of mine at various Disney shops! Three of them came from the Island Supply Company in Adventureland in the Magic Kingdom, and another came from the Polynesian gift shop BouTiki

Note: Island Supply Company is currently closed and undergoing a refurb, see photo below. Which is a bummer because this was one of my favorite shops in the Magic Kingdom! They always had a nice selection of comfy, surf-inspired clothing.

**Update: Disney has announced that this will soon reopen as a Sunglass Hut. I am not pleased. 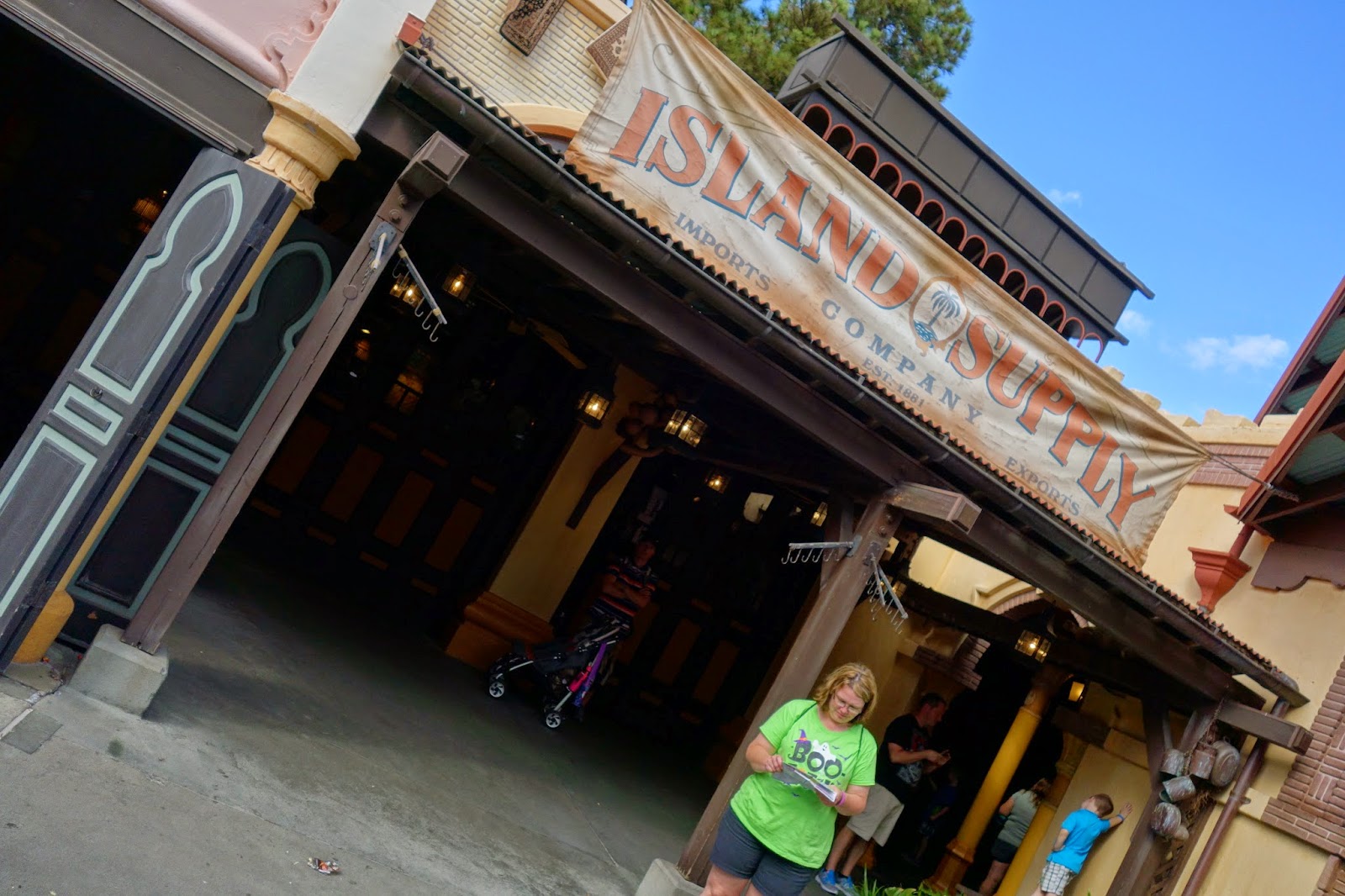 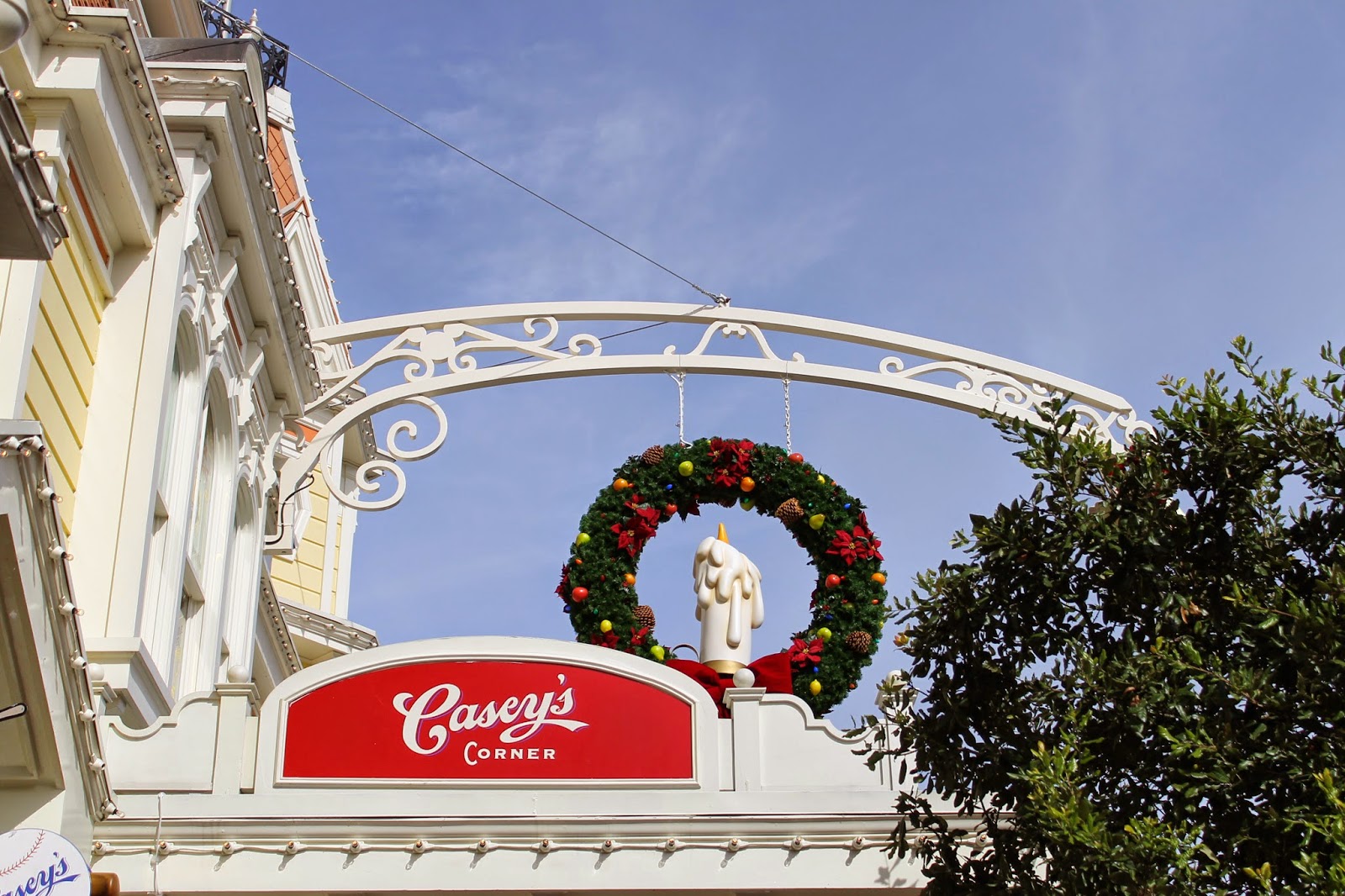 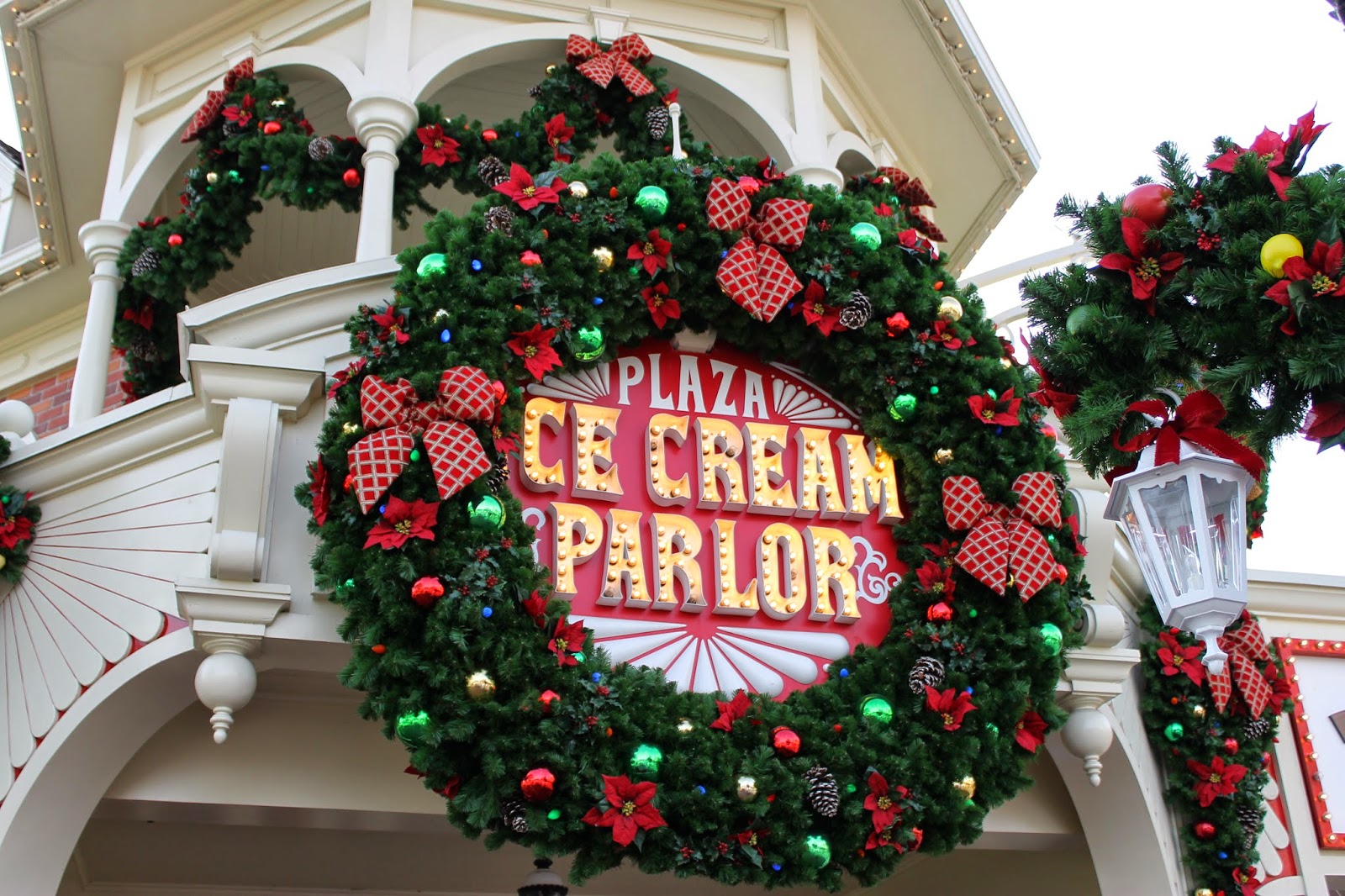 The holiday merchandise display inside the Emporium. 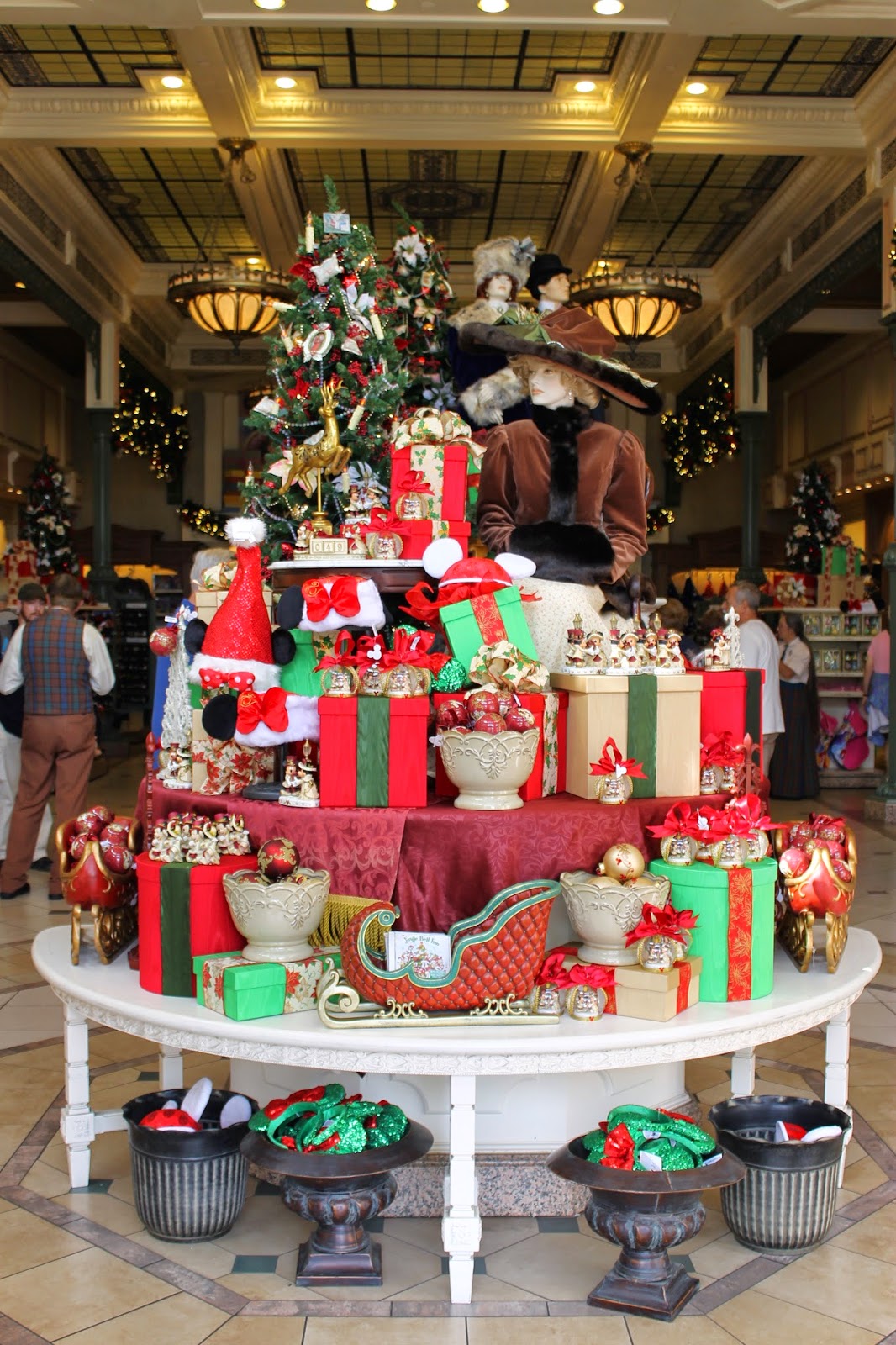 The Holiday version of the Trolley Show is now rolling down Main Street. 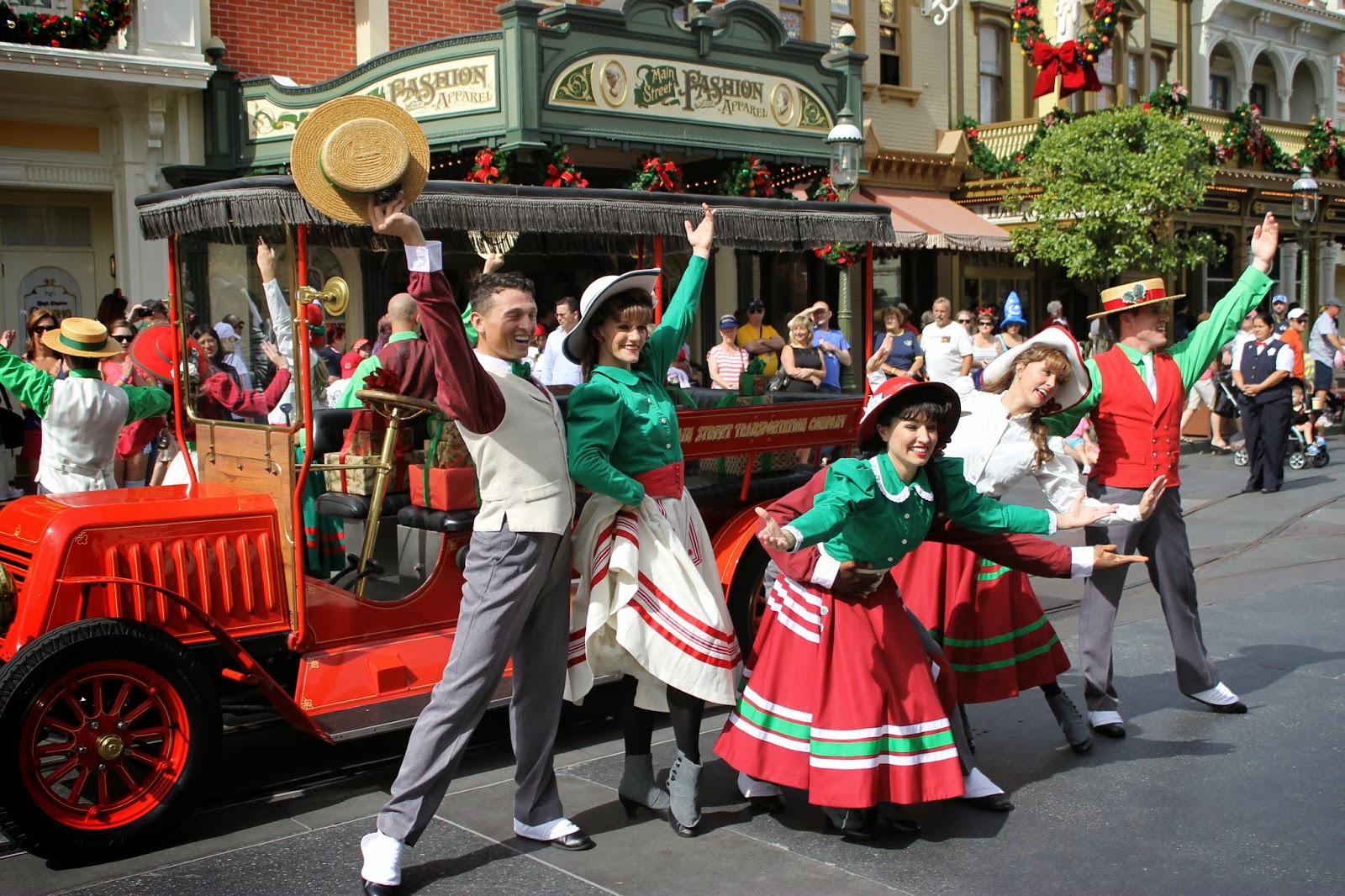 The Jingle Cruise has launched. 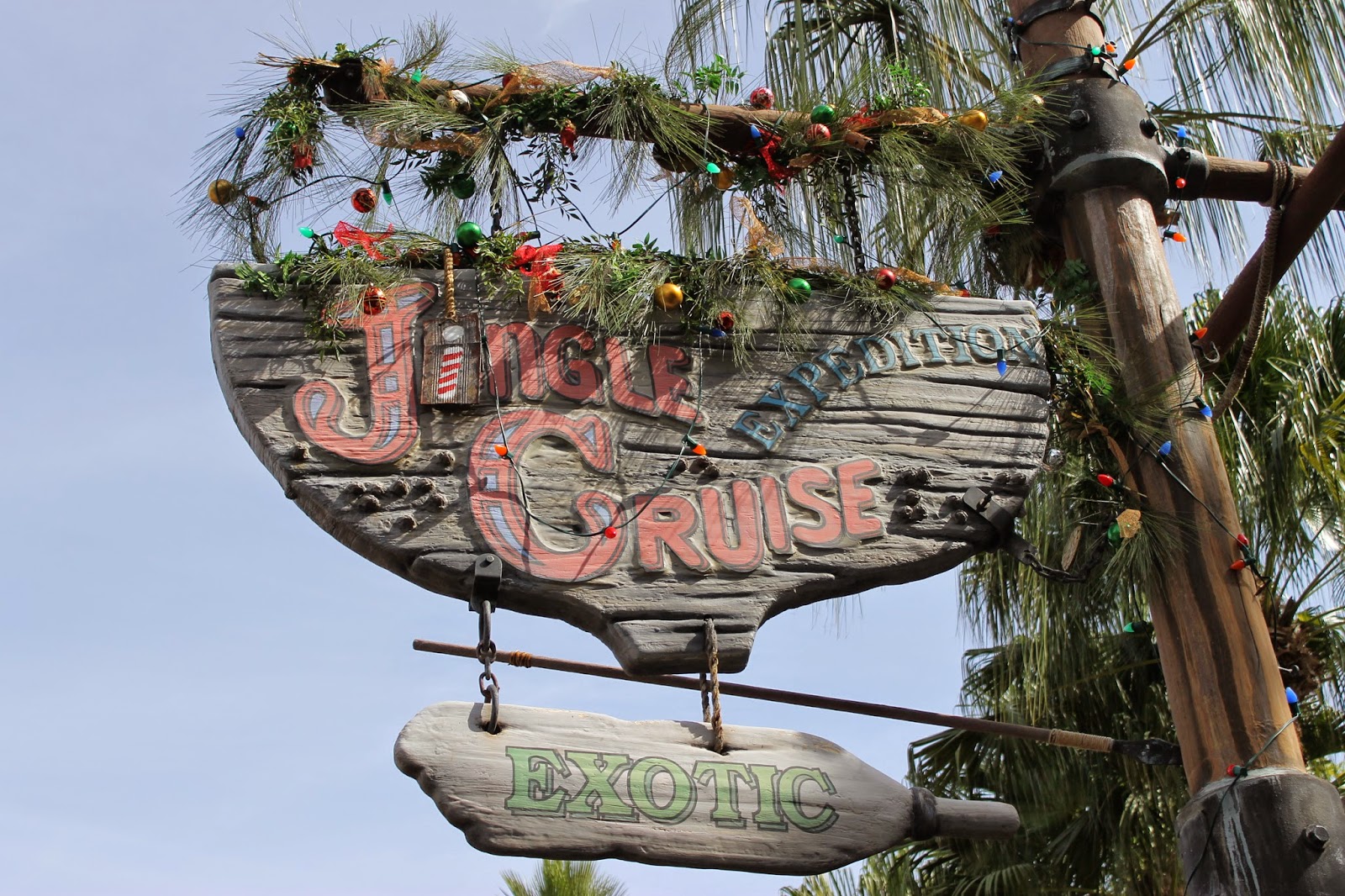 Funny story about this particular Christmas tree. It's located up on the second story of the Main Street Train Station. I was taking close-up photos of the ornaments, and noticed a rolled up piece of paper tied to the branches. Turns out it was a place marker to designate where this particular tree was to be set. Being the Disney dork that I am, I alerted a Cast Member, who promptly removed it. :) 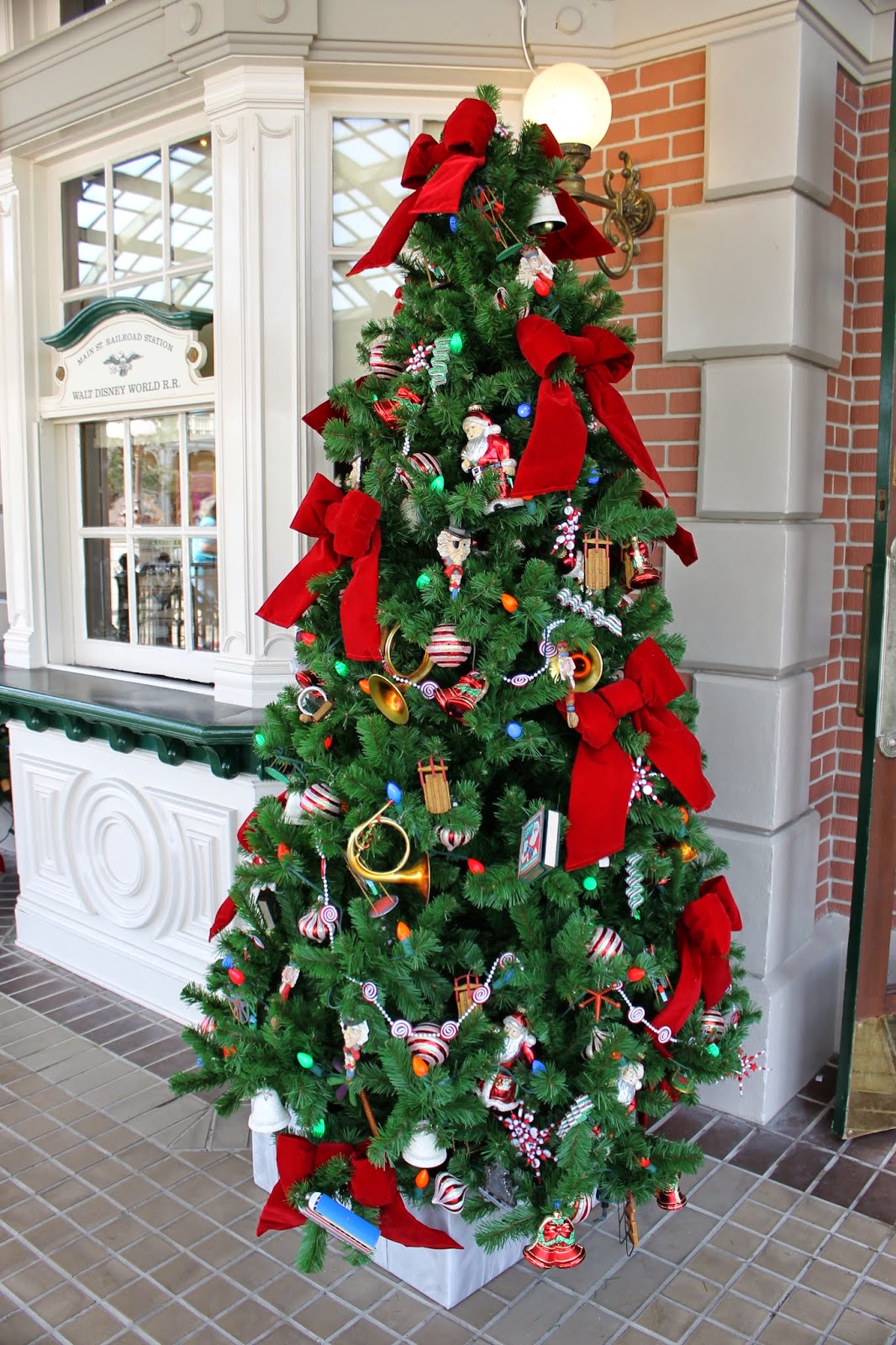 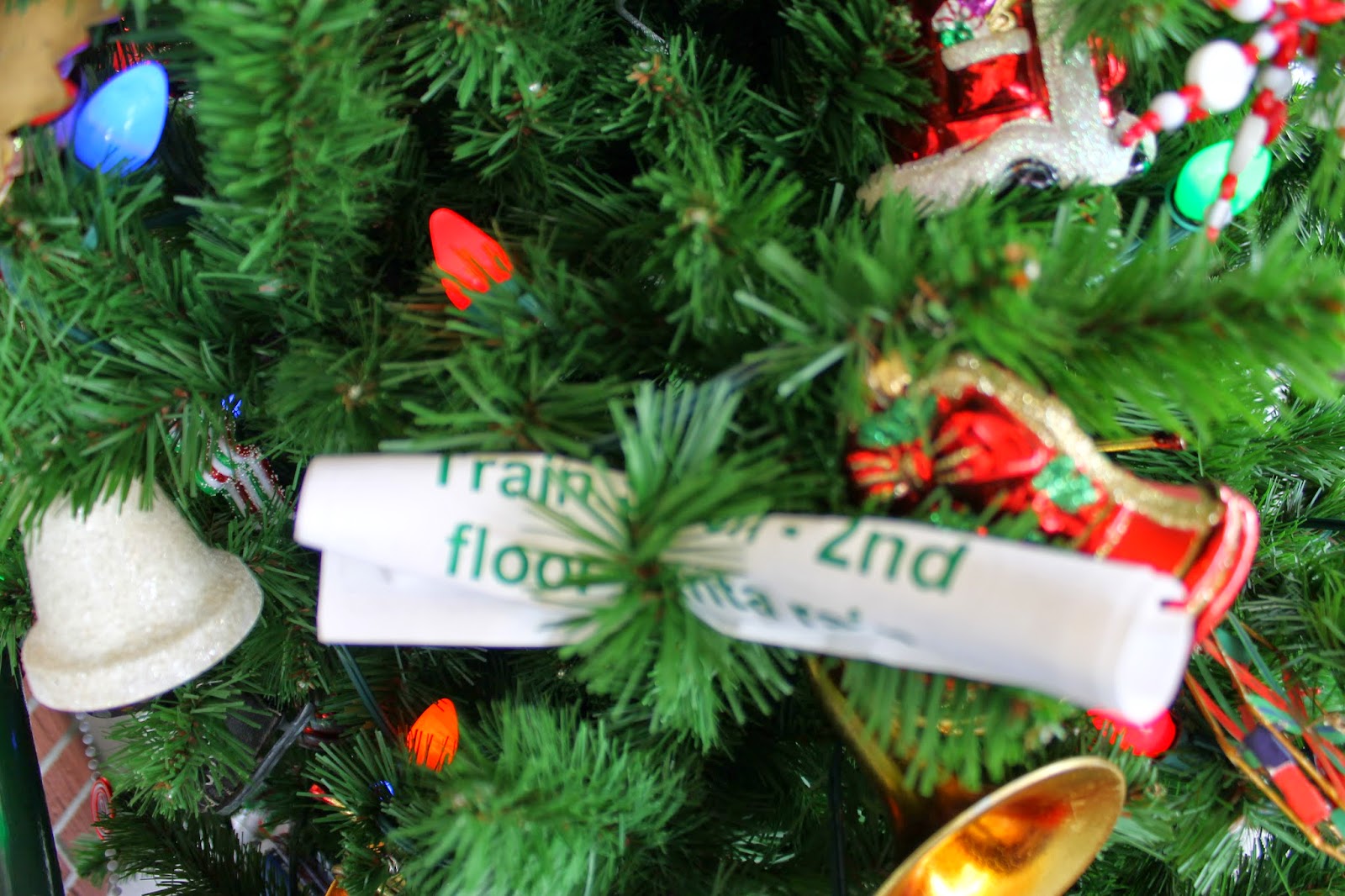 I've only recently really noticed these adorable silhouette cut outs on East Center Street. I Instagrammed a picture of some cute Halloween versions, and was happy to see some holiday themed ones as well. The boy and girl under the mistletoe might just have to come home with me. 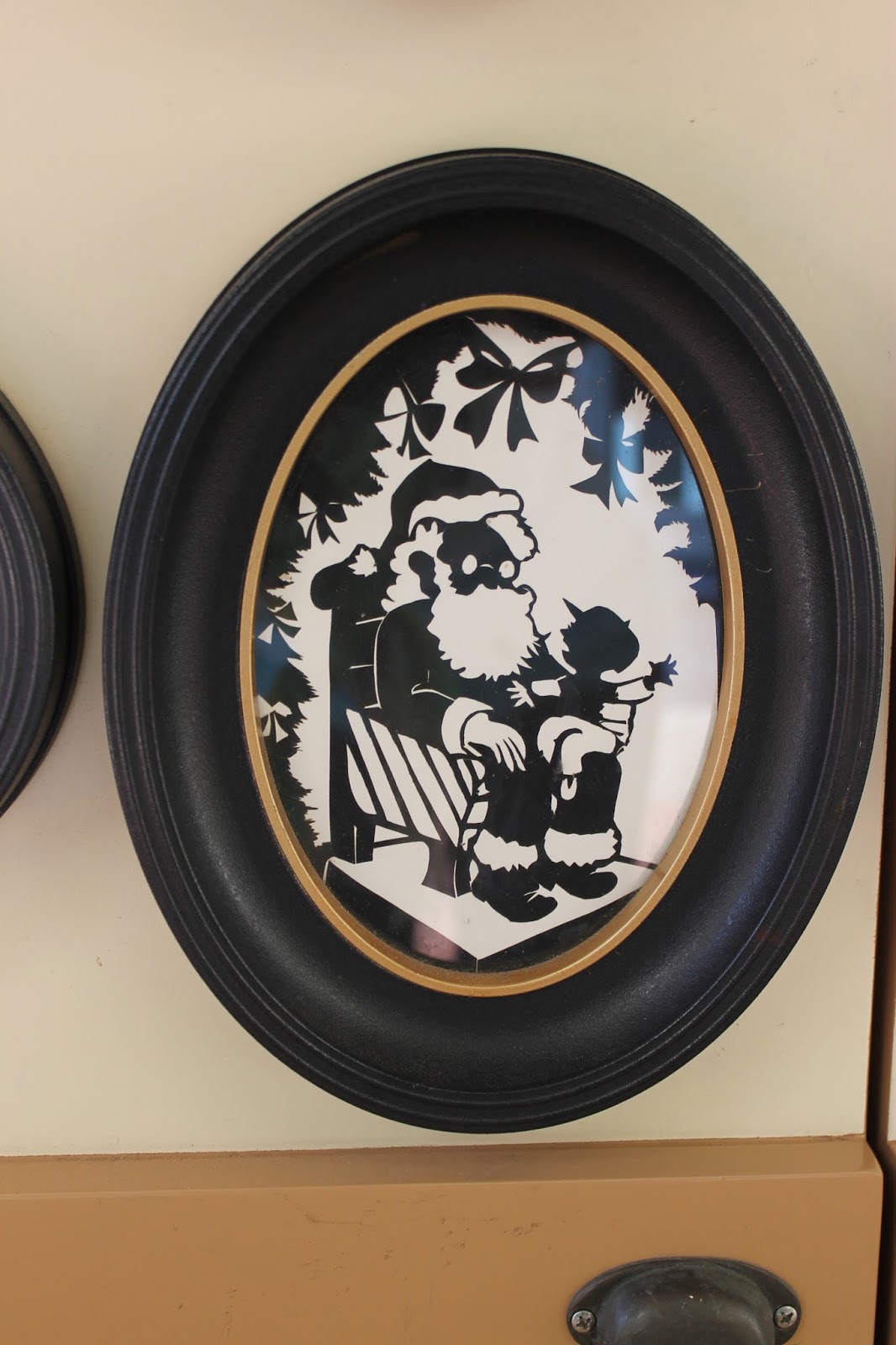 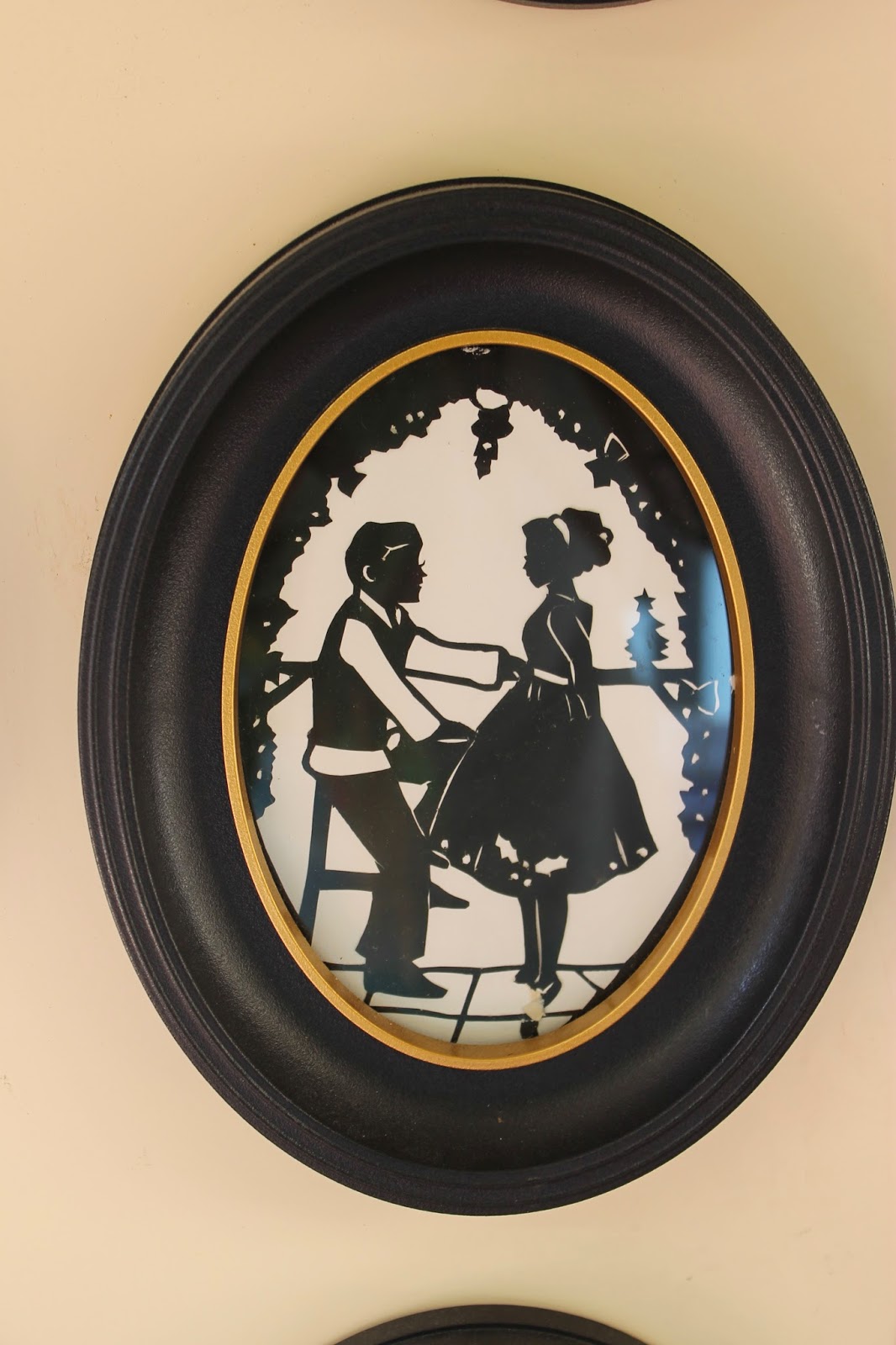