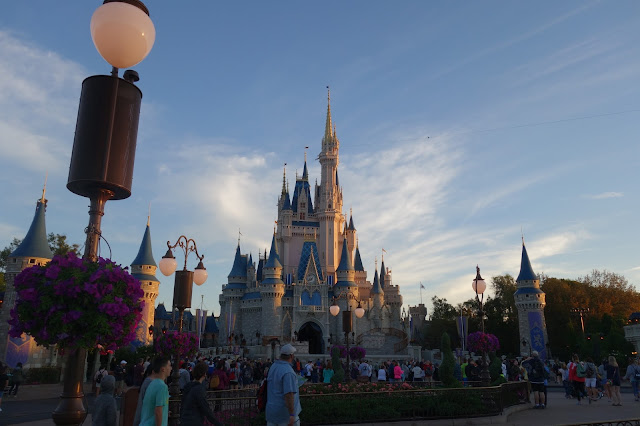 Hey y'all! Can't believe I'm posting now of all times (we are packing/moving today and tomorrow) but we have professional packers here right this moment, so I'm blessed with the opportunity to sit outside, sip my coffee, and write this little post. I mentioned in my last post that we had some exciting things going on here, and now I can finally share that we've bought a house and are moving this week! We're first time homeowners, and we're staying in our town and moving just a few miles up the road. To say we're excited is an understatement.

I feel like my content lately on the blog has been mostly baby-related, which makes sense seeing as my life is mostly baby-related at the moment, but I wanted to come back to my roots and write about the theme parks for a minute.

Yesterday morning, I made a quick jaunt into the Magic Kingdom. I captured some pretty photos and picked up a few timely tips, so thought I'd share them all here!

My parents have taken Will for the next few days so John and I could have a clear schedule to pack and move, so I was baby free this particular day.

It's the beginning of Spring Break season at WDW, so the park opening time was 8:00 am. I haven't seen the new Welcome Show since they moved it from the Train Station to the Castle, so I knew I wanted to make that. That meant leaving the house just after 7:00 in order to park and be in the gates of MK before 8.

Now here's the thing: I've heard they moved the Welcome Show for a few reasons; one, because the train was under refurb so they obviously couldn't use it or the Train Station, and two, to allow people to get in on Main Street, USA and quote "savor" the ambiance, shop and leisurely make your way to the Castle for the show. Oh, and also to reduce congestion in the Entrance Courtyard, between the turnstiles and the Train Station. 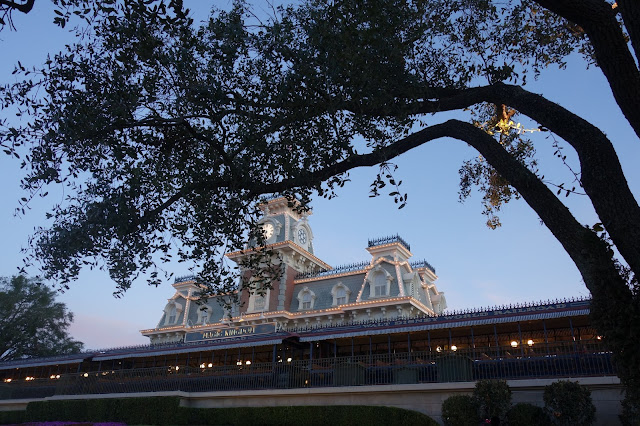 I arrived at 7:30 and people were just starting to fill in the two tunnels flanking the Station. By 7:45, the Entrance Courtyard was packed and we still weren't allowed in. Finally at 7:50, they let us onto Main Street. So the argument for moving the Welcome Show to ease congestion at the front did NOT hold up this particular day. But I did get some pretty pics of the sun starting to rise behind the Station. 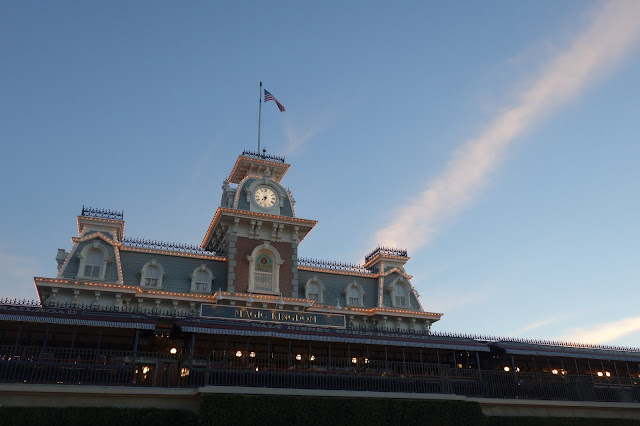 So we all enter Main Street and leisurely make our way up, "savoring" the ambiance, shops, etc, right?? That's a big ol' NOPE! People were rushing down the street, dodging and weaving to get to the Castle front and center. Perhaps this was due to the fact they they only let us in ten minutes before the show started? Either way, there was no relaxing here. Same story, different Welcome Show. But again, pretty pictures, so yay!

One interesting thing to note: with Daylight Savings Time starting just a few days ago, it's still relatively dark in the mornings. This coupled with an early opening time meant the lights were still on on Main Street, and the sunrise made for a nice change of pace for photographing this area of the park. 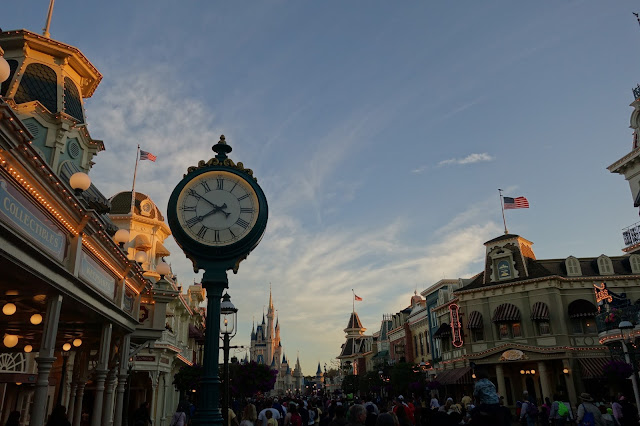 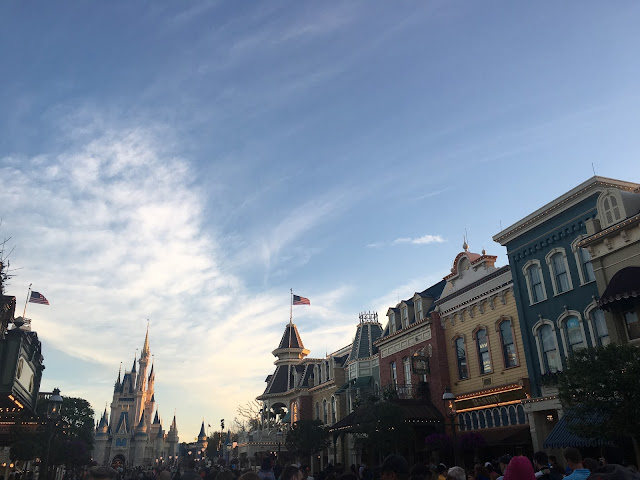 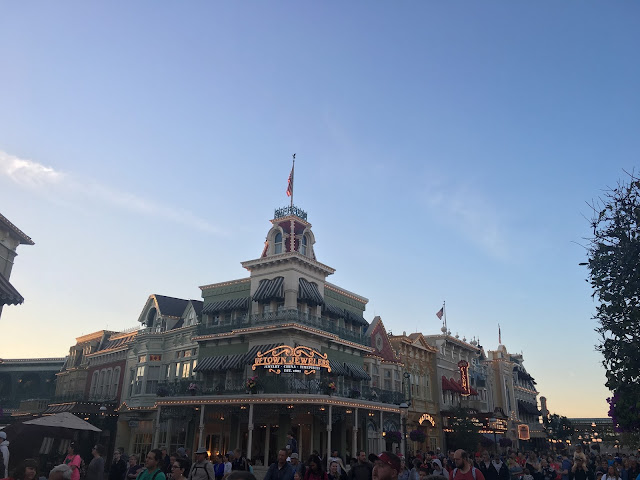 I watched the Castle Show from around the Partners statue; it didn't strike me as anything special, save for a bevy of characters, which I suppose is exciting for young kids and first time visitors. Still, the Train Station Welcome Show is my favorite. Walt was a 'train guy;' it's practically part of the reason why he even built Disneyland to begin with, to have a place to live out his childhood dreams and have a life-sized train encircling the park. He met some of the most influential partners in his career through his love of trains. Trains ARE Walt. That coupled with the catchy Welcome song and dance, and the characters making a grand entrance as the train whistles and pulls into the Station-- when the parents and kids all gasp and wave-- freaking gets me every time. My eyes get red, as John calls it when I cry. This Castle Welcome Show had none of that. Hopefully they'll move it back to the front of the park at some point in the near future. 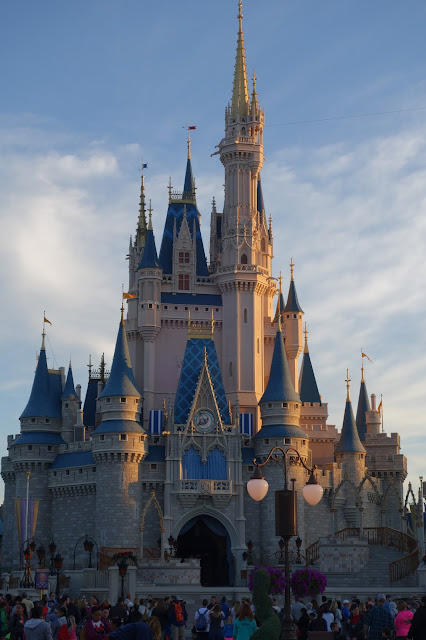 Since catching a sunrise in the parks is something that can typically only be done during the 24-hour days, I was eager to climb the Swiss Family Tree House and catch some photos from there. This was also the first time I've been on in a few years; I never want to lug my 23 pound butterball baby up there! 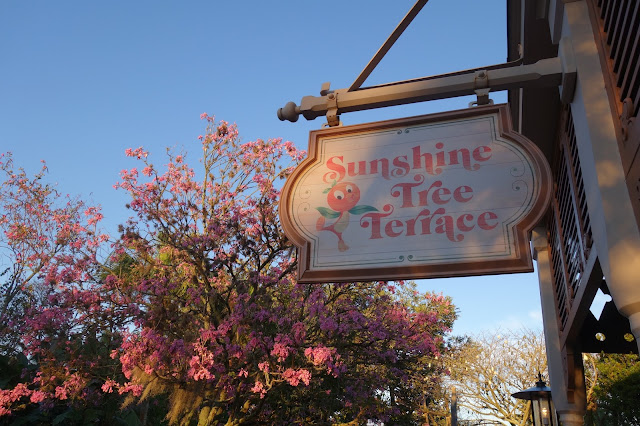 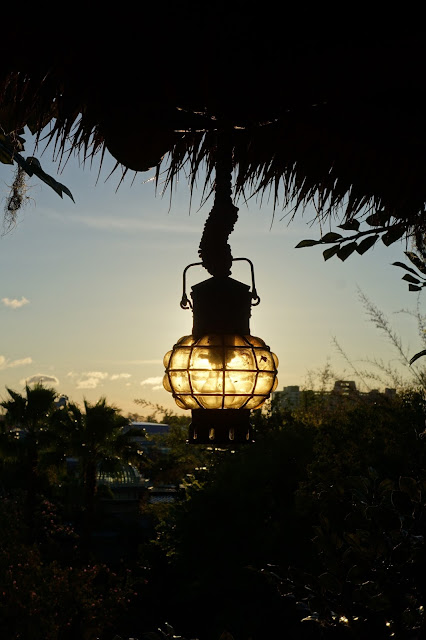 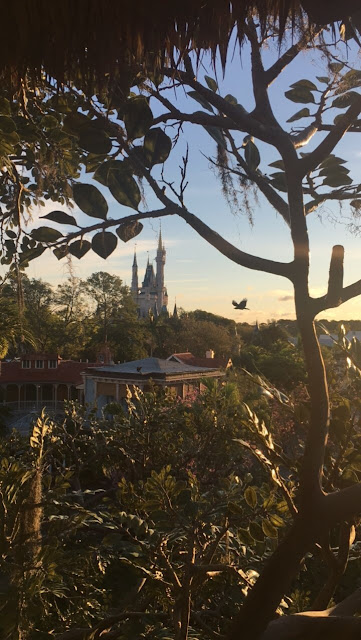 I meandered over to Frontierland and jumped on Big Thunder Mountain Railroad, which was a walk-on! It was about thirty minutes after park opening by now, on one of the busiest days/times (Spring Break), so this goes to show you the value of rope-dropping the parks. You can accomplish so much in the first hour. 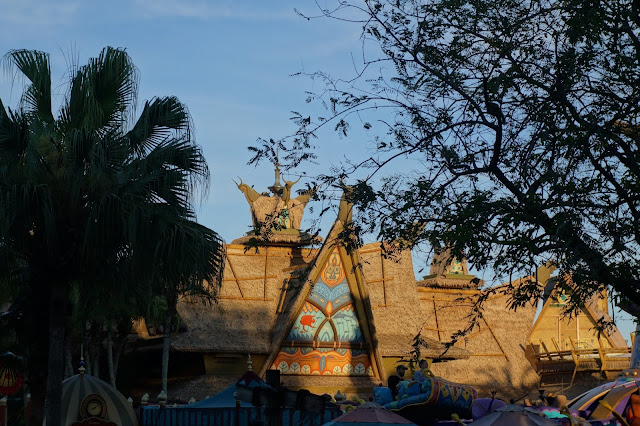 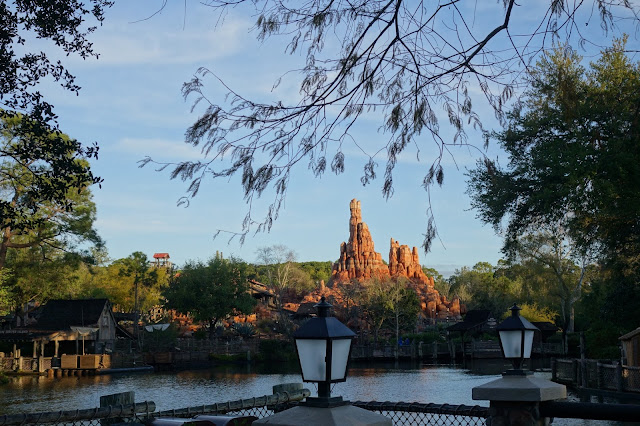 After that I made my way back to Be Our Guest restaurant in Fantasyland. 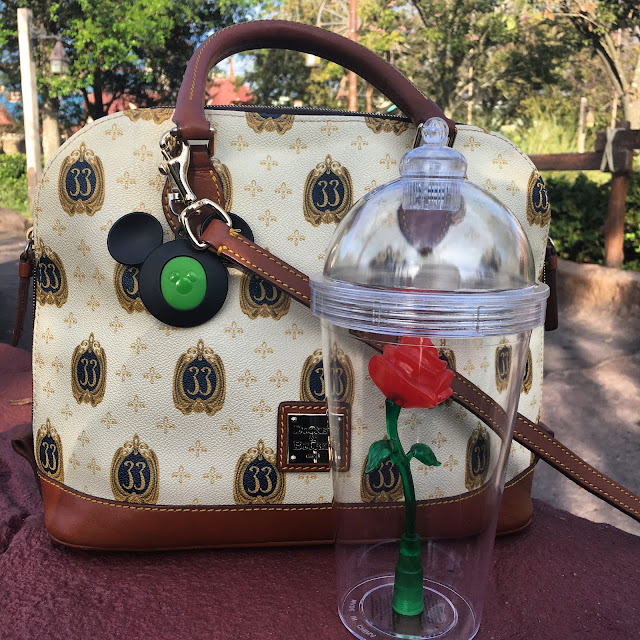 Ok. So if you're not a Disney nerd and on Disney social media, you might not be aware of the hype that surrounds this particular cup. With the release of the live-action BatB coming up, a souvenir cup is being sold in WDW at Be Our Guest and in Disneyland at the Red Rose Tavern. People have waited in lines for hours in Disneyland to get their hands on this. We're fortunate here in WDW in that we can make Advanced Dining Reservations (ADRs) and can just show up at our appointed time to order said cup. (Although a BoG ADR is a tough one to nab.)

A friend of mine, who lives in England, asked about the cup, so I offered to try to get one for her. Lo and behold, I found a breakfast ADR the next day!

If you're not familiar with the restaurant, it's a self-ordering system. You walk to a kiosk and place your order there, find a table, and a Cast Member finds you via a tracking device (in this case, a plastic red rose) and brings you your food. The MyDisneyExperience app lists these cups on the menu for the restaurant, and says there is a five cup limit per transaction. (People are scooping these up and scalping them on eBay, a la the Lilly Pulitzer+Starbucks S'Well water bottles). I started adding cups to my cart, and kept clicking to see if I could add more than five. Sure enough, it went to six! I stopped there, but my thought is that you could potentially order more if you wanted to. 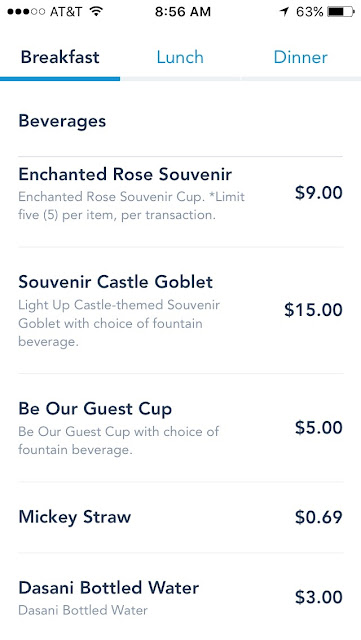 NOTE: the cost for breakfast at BoG is $24. I didn't want to eat and was able to ONLY order cups, so that is an option. Also note, I was picking up all these cups for friends who had helped me find a Lilly S'Well bottle, and NOT to scalp on eBay. That crap infuriates me!

So, I placed my order, made my way to a table, and waited on my cups. A Cast Member brought them out to me, all in one big bag, and individually wrapped in bubble wrap. The girl sitting next to me asked about them, and I suggested she just go back up to a kiosk and place an order for one since she had already ordered and eaten her breakfast. That's when the Cast Member let us in on a tidbit that I think is pretty neat.

Apparently you can just walk up into Be Our Guest and order the cups at a separate kiosk staffed by a Cast Member. I didn't try it but might in the next few days, seeing as all six cups that I got were for other people, and I don't even have one for myself! Ha. They may cap your limit at five cups when you order from this particular kiosk, I don't know. Your mileage may vary.  But lets be real here, who really needs five Enchanted Rose cups? Unless you're buying for friends ;)

Cups in hand, I started my way out of the park. I popped into the Emporium to look for a keychain. While in there i stumbled upon the uber-popular Walt Disney World jerseys. They're easy to find- just look for the swarm of twenty-something girls and *bam* there they are. I decided to try one on to see what all the fuss is about- they run HUGE! Is that how you're supposed to wear them? I dunno. I'm not that hip. Needless to say, I left without one. If I were to get one, I'd like the Disneyland version. 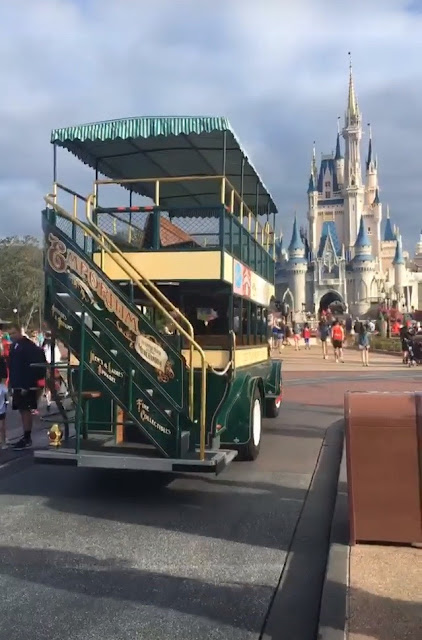 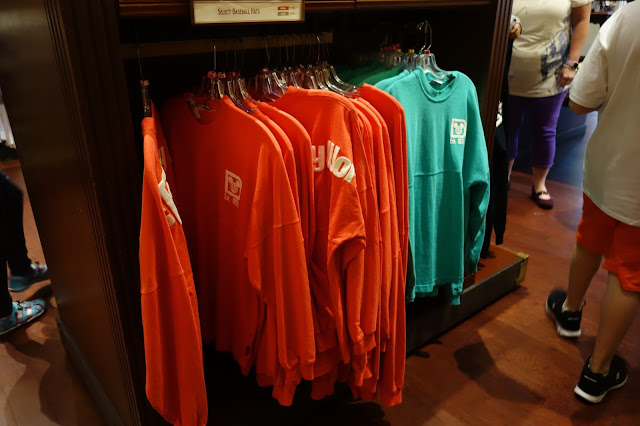 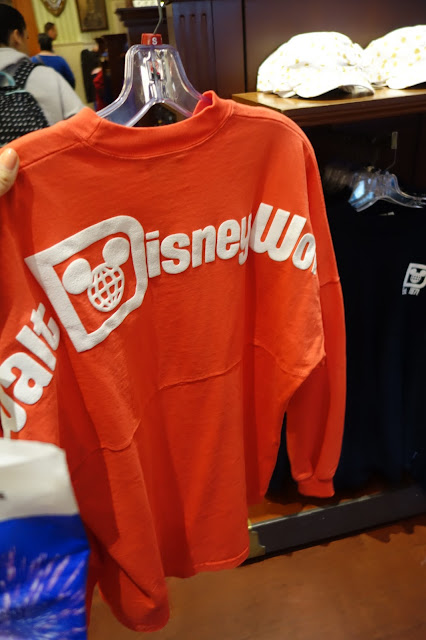 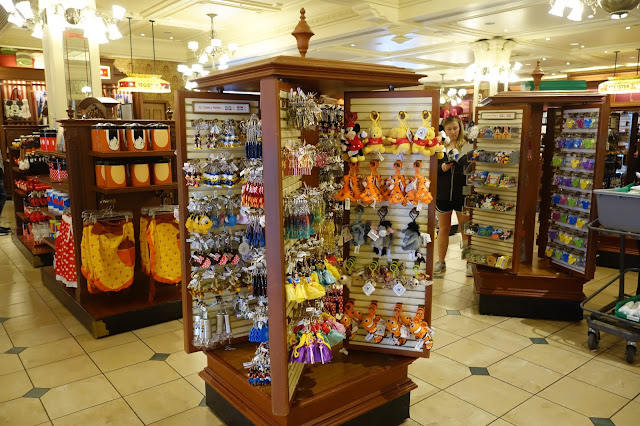 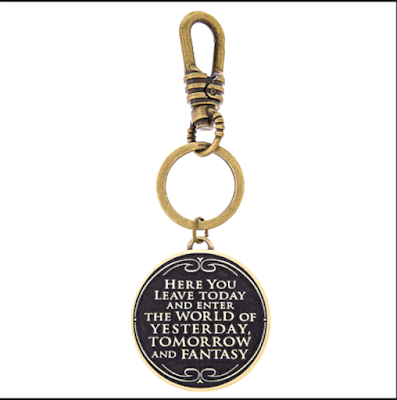 Made my way to the front of the store to the keychain display and couldn't find the one I was looking for. So shopping was a bust, which I'm sure my hubby is only too happy about. But the cup mission was a success, and that was ultimately my goal for the morning.

From there I took the monorail to the Contemporary and decided to stop at Contempo Cafe to check the breakfast options. I ended up choosing the Kid's Breakfast Platter, which came in at $5 with my Annual Pass discount. It was just enough food, and I saved $19 over eating at Be Our Guest (see John, I could have bought the keychain with all my savings! Ha). I also saw this CUTE monorail cupcake in the dessert case. And can we just talk about the Mary Blair mural, please? Never gets old. 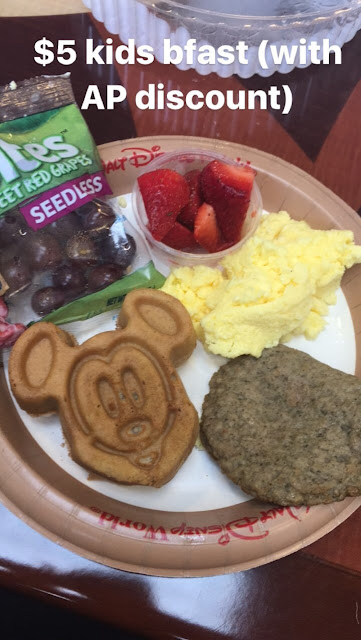 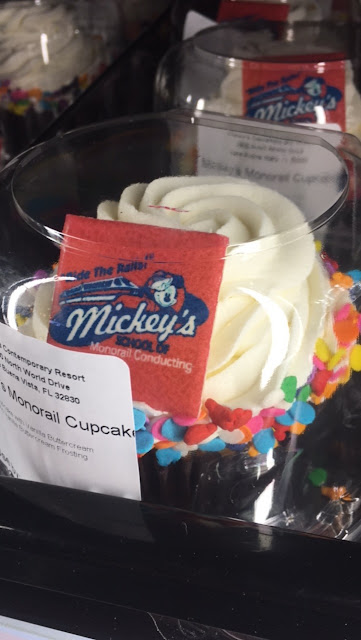 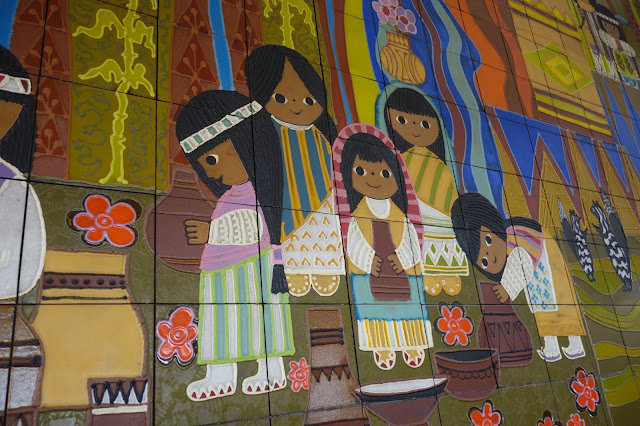 It was time to get back to reality and head home to pack, pack, pack! You know, just those few hours of alone time in the park did wonders for my soul. Stopping to take photos as I pleased, meandering, going by my agenda and pace, enjoying the park in the cool morning hours in the golden light, it was, to be cliche, quite magical. I'd encourage everyone to spend some solo time in one of the Disney parks at some point.

Posted by Dressing for Disney at Wednesday, March 15, 2017

Email ThisBlogThis!Share to TwitterShare to FacebookShare to Pinterest
Labels: be our guest, beauty and the beast, enchanted rose cup, Magic Kingdom, sunrise