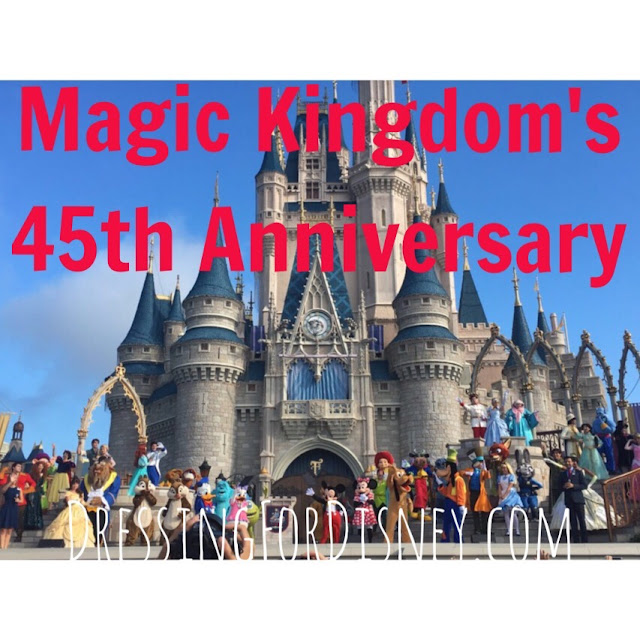 We celebrated Magic Kingdom's 45th Anniversary this past Saturday despite crushing crowds, blistering heat and driving rain. Crazy Disney fans will do that, ya know?! Our goal was to experience all 15 Opening Day attractions, in no particular order.

As I write this, Orlando is under a Hurricane Warning- a first that I can remember in a long, long time. I'm from the beachside (Melbourne) where we get them more frequently, but the fact that the storm might barrel in so strong, so close to us here this far inland, is kind of nerve wracking.

My mom has come over from Melbourne to ride out the storm with us; prayers and well-wishes we all fare ok, everyone in the path of Hurricane Matthew.

Thomas, Michael, Angie, Tink and I made it to the Welcome Show with minutes to spare. Other than the 45th banner, there was no mention of the anniversary in the show, or anything special for that matter. 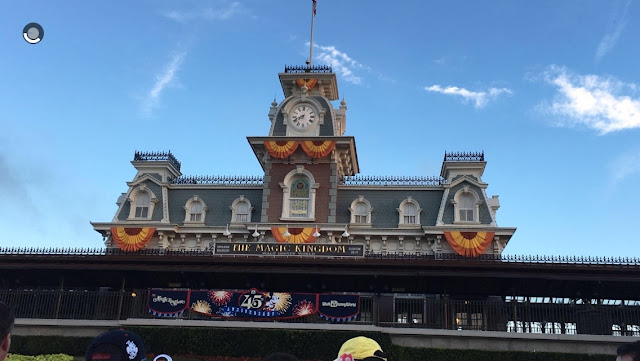 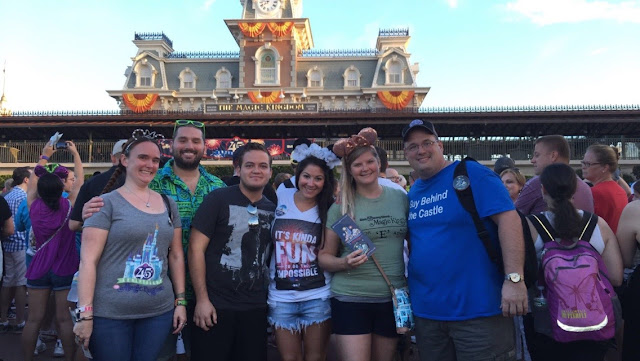 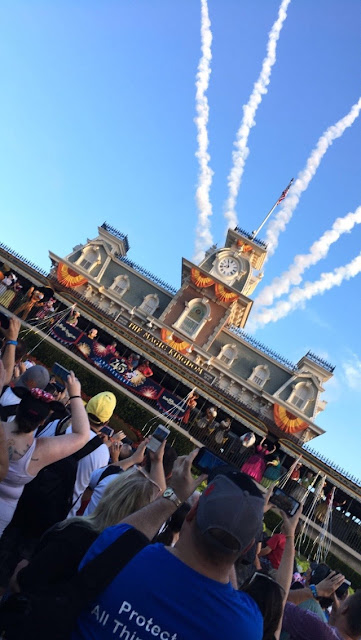 Once we entered the park, we beelined for the castle stage to post up a good spot. Thomas and I then went to the Emporium to check out the merch situation-- and found a line stretching from the front entrance of the Emporium (by the barber shop and fire station) back to the Hub grass. Insane!

We abandoned ship and met my friend Amanda, DixieDelights, in the Pandora line. She wanted to get the special charm for the 45th. After chatting for a bit, I got in the Starbucks line that snaked from Starbucks to Center Street. The theme of the day was LINES!

Anyway, we all got our coffees and headed back to the stage just in time for the show. There were 45 characters on stage, and George Kalogridis, the president of WDE, spoke, but the real show-stopper was when the 45th banner didn't unfurl all the way. We all laughed at what a good metaphor it was for WDW- tries hard, but always has a snafu. 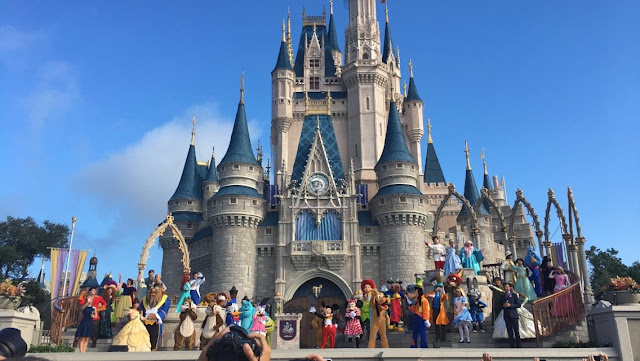 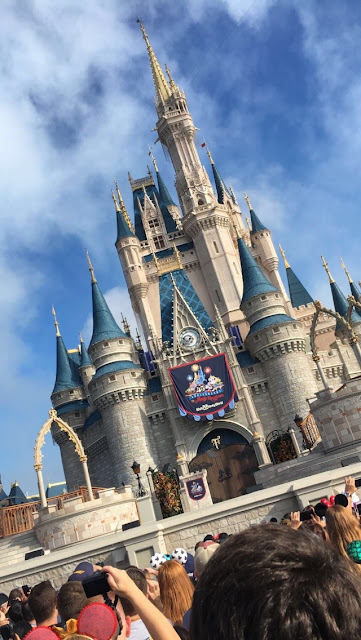 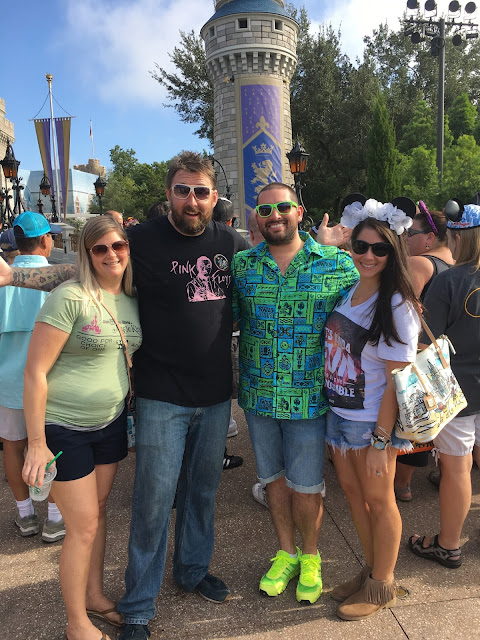 We went to Guest Services back in Tomorrowland to deal with some business, then rode the train with some Twitter friends. We followed that with a spin on Dumbo and then the Tomorrowland Speedway, where we happened upon some more Insta friends (hi Josh, @thesteele). Josh did a great job of driving us around the entire track without hitting the middle guardrail once!

Teacups rounded out the morning before we stopped for lunch at Casey's Corner, to try the special 45th Anniversary hotdog. Finally, we're getting something more along the lines of Disneyland, with specialty food items OTHER than cupcakes. To see what I mean, click to read this post about the Halloween food offerings at WDW and then read this post to see the abundance they get at Disneyland! Not fair! 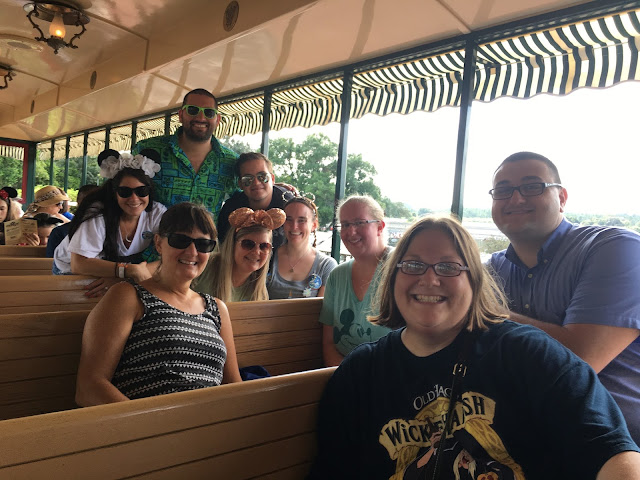 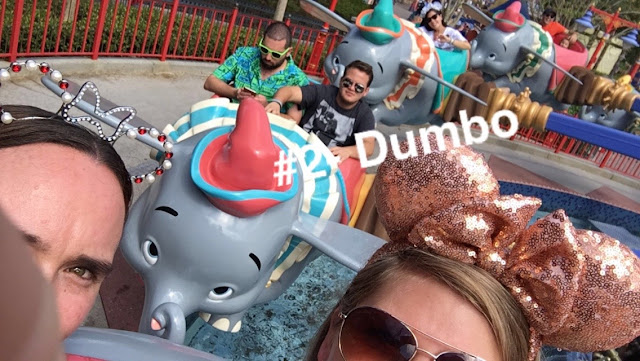 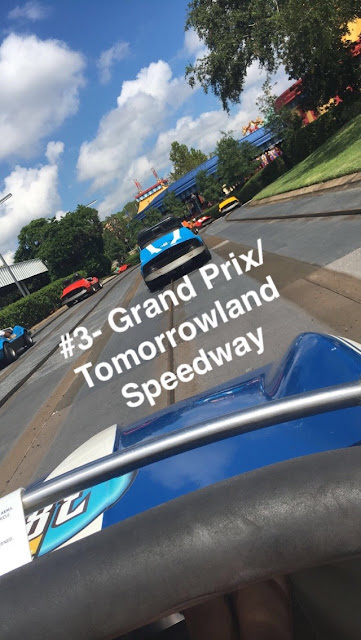 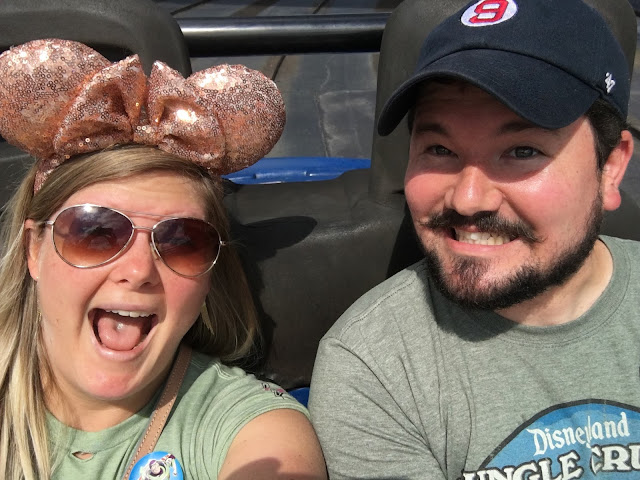 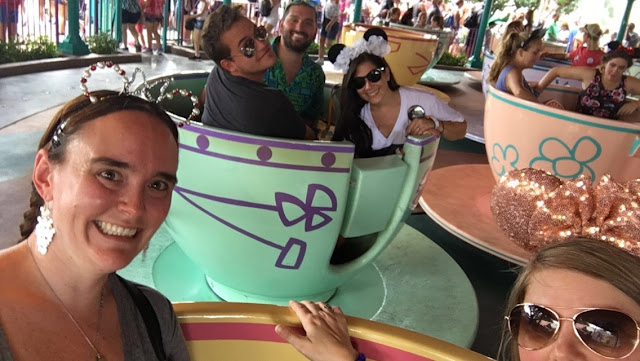 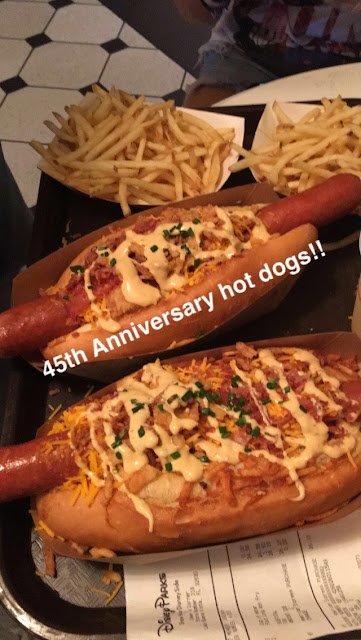 The Dapper Dans were next on our list of Opening Day attractions. I've never had a photo op with them before, so that was fun.

From there, we headed to the Poly. Rumors were swirling that the Hitchhiking Ghost mugs were going to debut at Trader Sam's Grog Grotto that day, so we wanted to line up early. 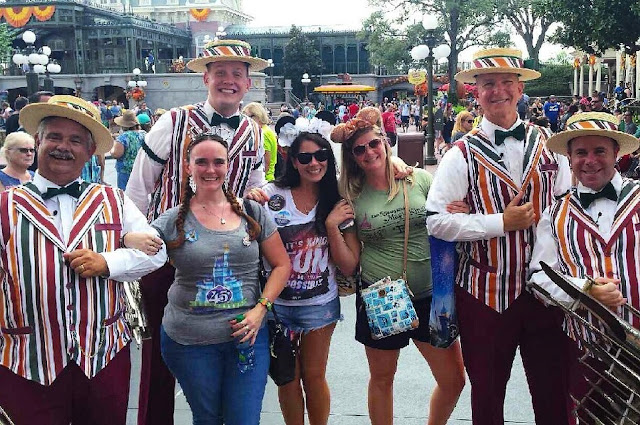 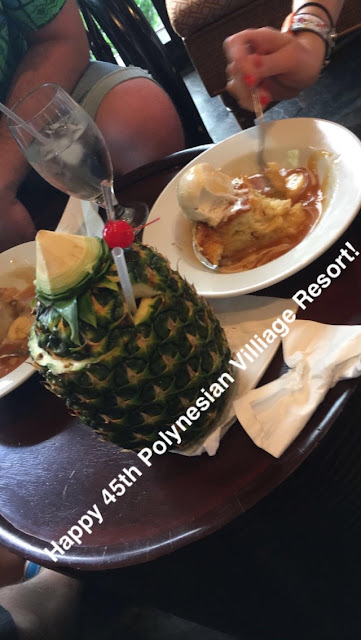 Turns out, they didn't. Word on the street is that once social media got a whiff of the plan and blabbed it all over the place, plans were halted so as to fend off a frenzy. As it were, the mugs were released sans fanfare the following Tuesday, and Josh pulled through once again in securing me a spot in line so we could get a coveted mug. But that's another story.

Speaking of another story, while the rest of my group was posted up in line at Trader Sam's, I scooted home to take care of some stuff. John had taken the baby to his parents for the weekend, and I forgot my house keys. Long story short, I was locked out and had to wait for a locksmith to come let me in. I returned a couple hours later, and we drowned our mug-less sorrows with a Lapu Lapu and bread pudding from Tambu Lounge.

We returned to MK just as a storm was rolling in. Perfect time to check Hall of Presidents off our list! 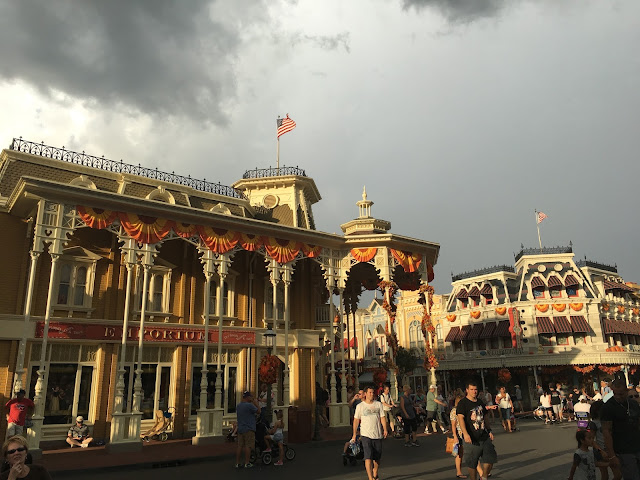 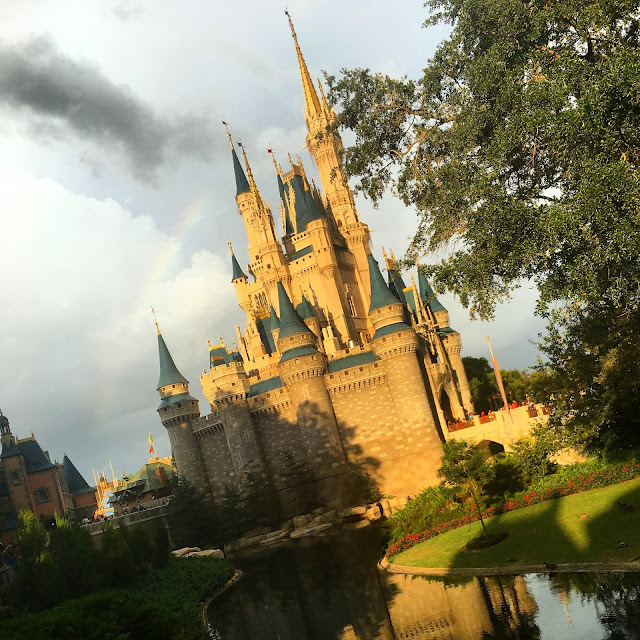 The rain was really coming down when we emerged from HoP, and would continue to do so for the next few hours. Luckily, everything we had left to do was fairly close together, and mostly indoors. We scooted to Columbia Harbour House for a snack and to sit out some of the rain, then to the Haunted Mansion. From there, we took refuge in Memento Mori for half an hour; the rain was REALLY pouring then. 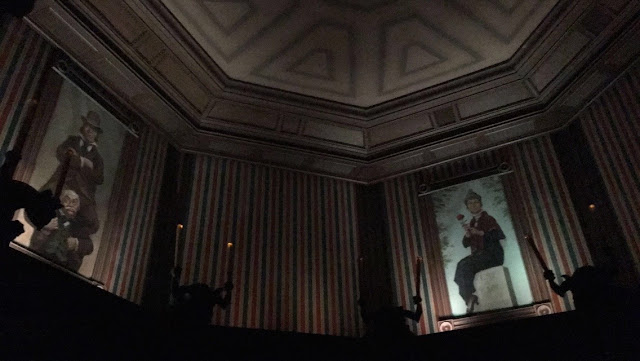 When it let up a bit, we ran to "it's a small world". We waited in line for around half an hour before they made us all leave due to technical difficulties. Couple that with the fact that Jungle Cruise had been closed for a few hours due to lightening, and it looked like our goal of riding every Opening Day attraction was foiled. 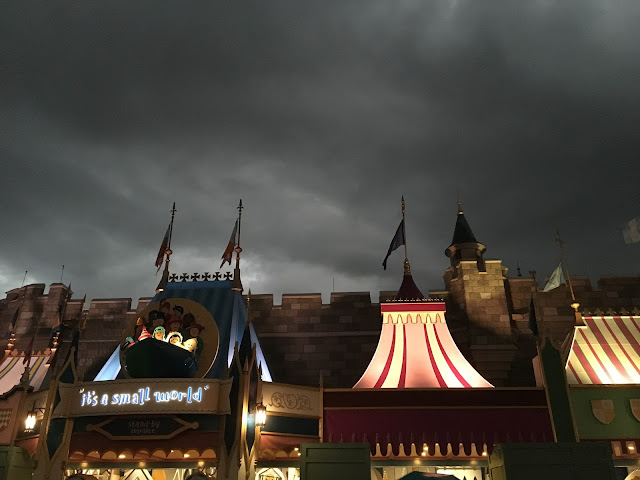 We rode the Carousel next, then made our way to Frontierland. The Shooting Arcade and Country Bear Jamboree followed. We then made it into the last showing of the Enchanted Tiki Room. On a whim we decided to check Jungle Cruise in the off chance it might be back open, and IT WAS! We walked on to our 'bote' and checked that one off the list. 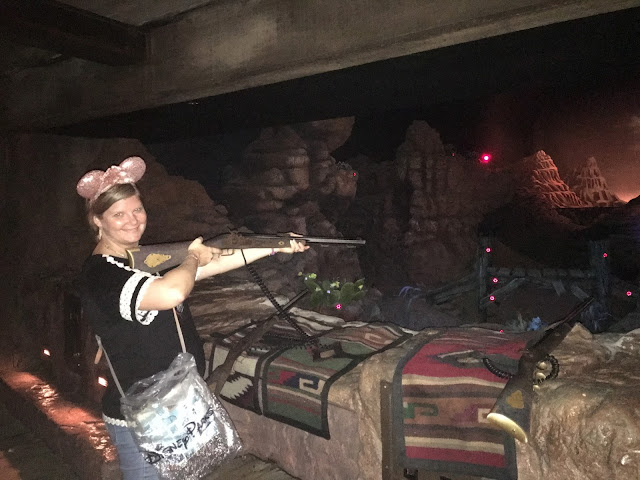 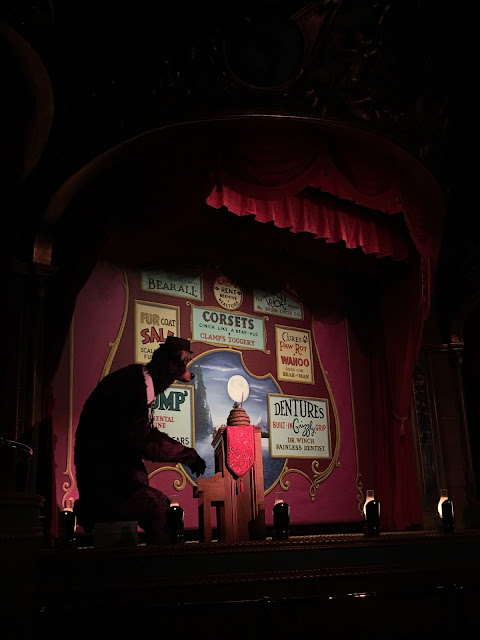 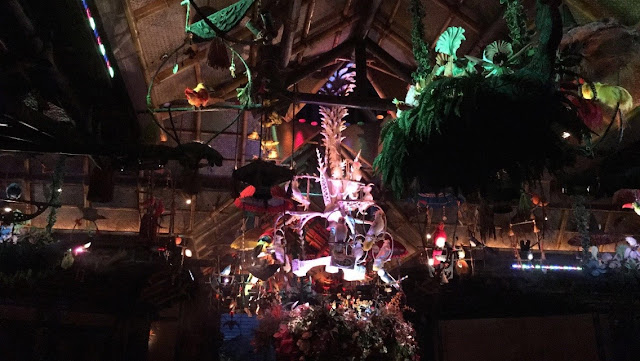 Swiss Family Tree House was down for refurbishment, so we had to skip that one by default. We ended the night by watching the Main Street Electrical Parade and snacking on popcorn and rice crispy treats.

We were thisclose to leaving the park when we decided to check to see if 'small world' was back up... and it WAS! We made the long walk back to Fantasyland (following the end of the parade up Main Street and around the Hub) and checked the final attraction off the list! 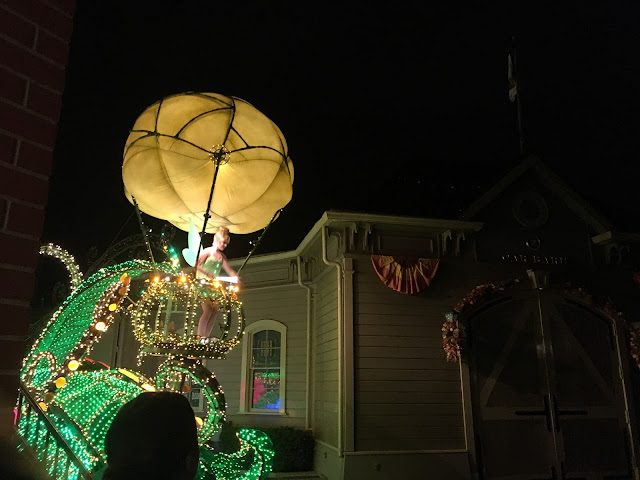 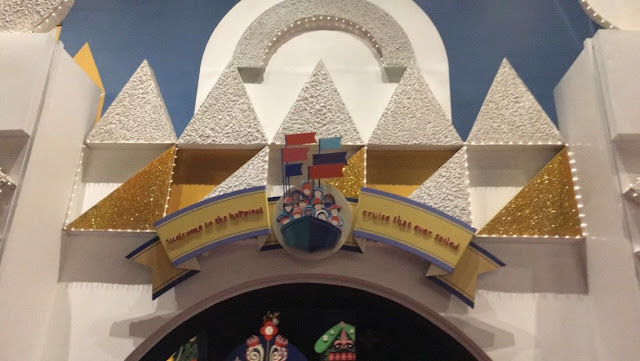 We headed toward the exit,  climbed the stairs to the top of the train station, and watched the Kiss Goodnight.

It was a magical day from rope drop to closing. The only thing missing was John, but he would have hated pretty much every second of it between the crowds, heat and rain. He's become quite Disneyfied, but it takes a strong Disnerd to withstand the kind of day that ended up being.

I'm fortunate to have spent a memorable day with fellow die-hard fans, and can't wait to see what the next five years and the 50th Anniversary have in store.

Posted by Dressing for Disney at Thursday, October 06, 2016