Dressing for a Disney Cruise: Sea Day 1 and Formal Night

Our first full day on the ship was a sea day. I personally LOVED our days at sea- they really give you a chance to explore and enjoy the ship.

Our morning started with a sunrise from our balcony along with coffee and a light breakfast. 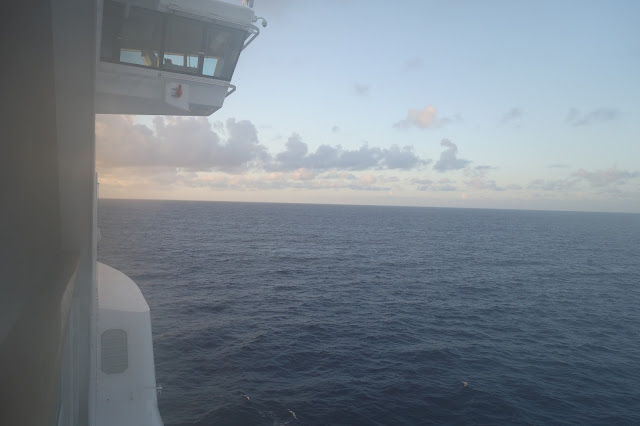 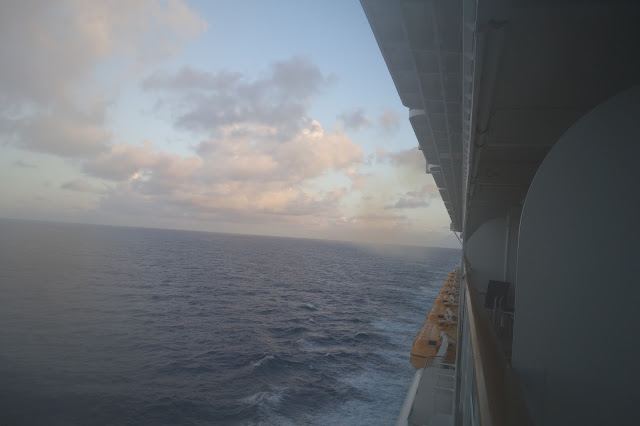 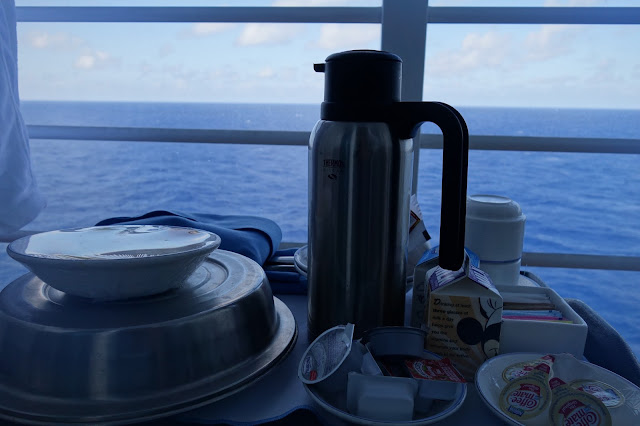 Most of our mornings started like this. Then we'd dress for the day, depending on the activities, and head up to Cabanas to grab a heartier bite for breakfast.

On this particular day, we hit up the adult pool after eating. 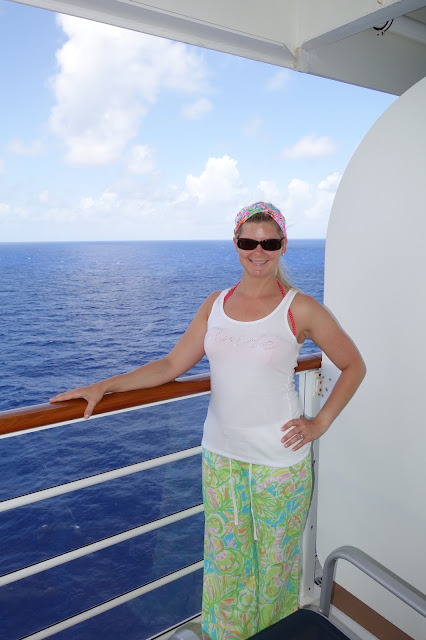 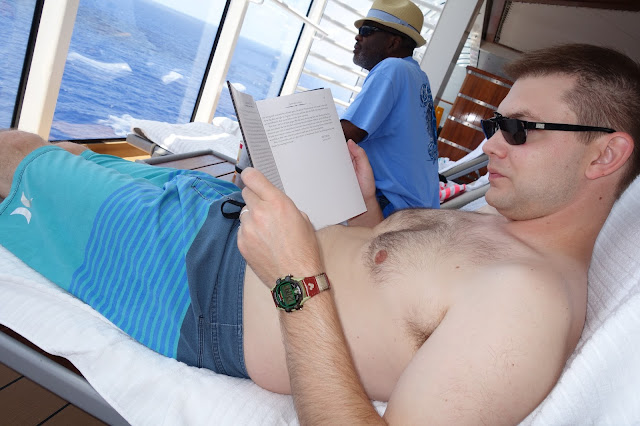 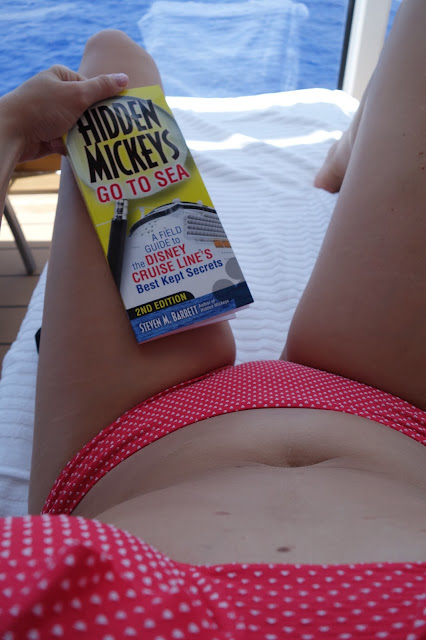 Another sweet gift left in our room from Tammy of Storybook Destinations.

If it wasn't clear already, I LOVED our cruise. The only downside I could think of, though, was the pretty much constant need to have a timepiece available. I mean, if you have any beverage seminars or dinners or things scheduled, you have to know what the current time is, right? Which is great and all. But when I think of a true 'vacation,' I often think of not having to watch the clock-- to really get away from the grind of 'real life.' One way we did this was by locking our cell phones up in the safe soon after boarding, and keeping them there until we arrived back in Port Canaveral seven days later. THAT was a vacation in and of itself.

So, #firstworldproblems, I know, but we found ourselves in need of some way to keep track of time. John actually found a decent waterproof watch in the gift shop, and I think it only set us back $30 or so. For him to wear Mickey anything is pretty rare, so I had to document the occasion with a picture. 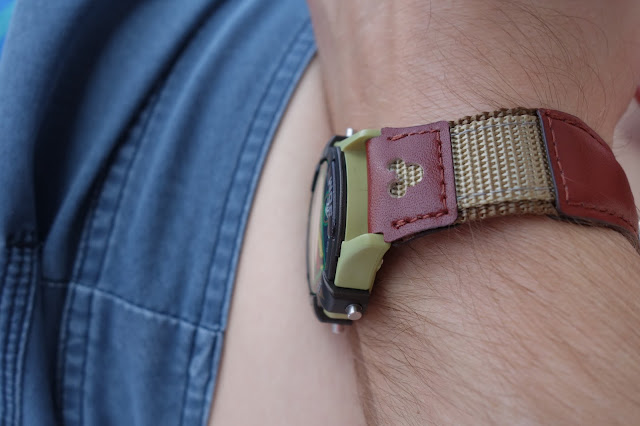 We had a Mixology class that afternoon, so after some pool time, we headed back to the room to freshen up and head to the bar. 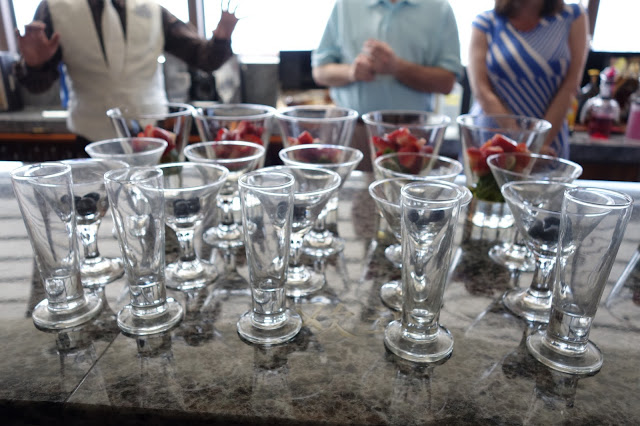 I'd read some really good reviews about this class, and boy did it live up to the hype! There were probably 15 or so of there, and we each had a chance to try our hand at mixing up a cocktail or two. Everyone got to sample a small-sized sample of each drink as we went along. At first, it may not seem like much, but it sure did add up! Look at our smiles getting bigger and bigger with each drink... 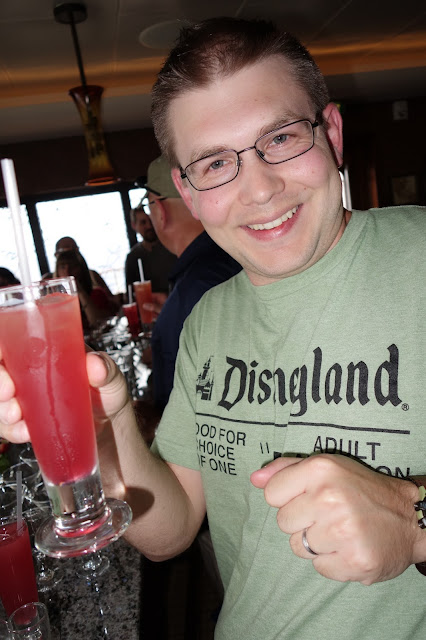 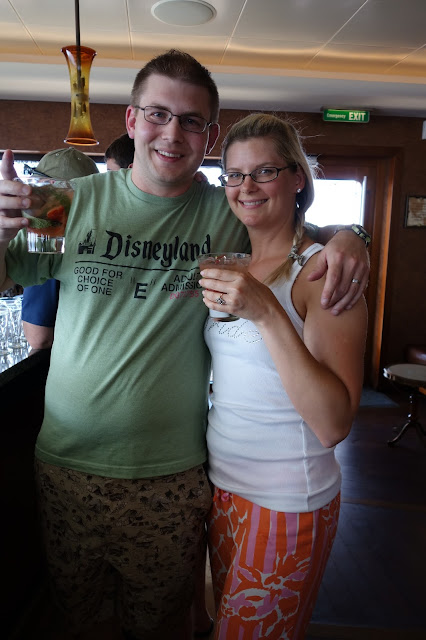 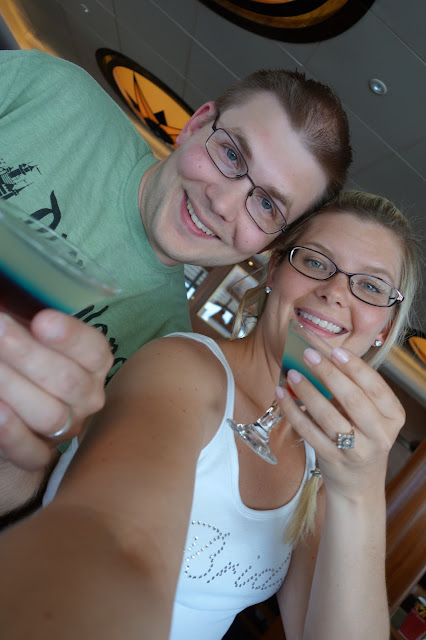 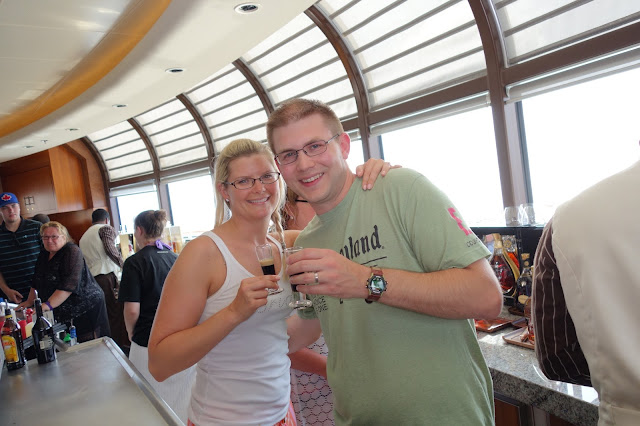 Pretty sure it was nap time after that. We found this really cool door decoration in our hallway. 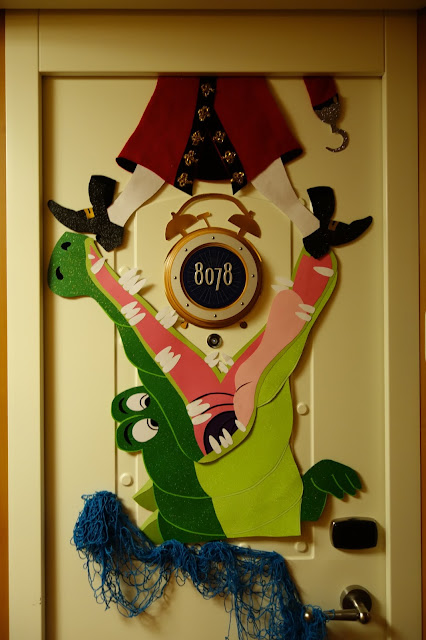 After napping and watching some of the amazing in-room t.v. (no, that's not a joke- it's awesome. More in a later post), we ordered up our routine cheese plate to snack on with a glass of wine while dressing for dinner. 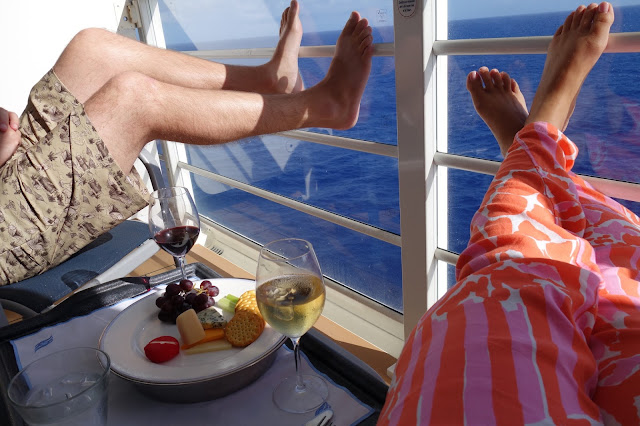 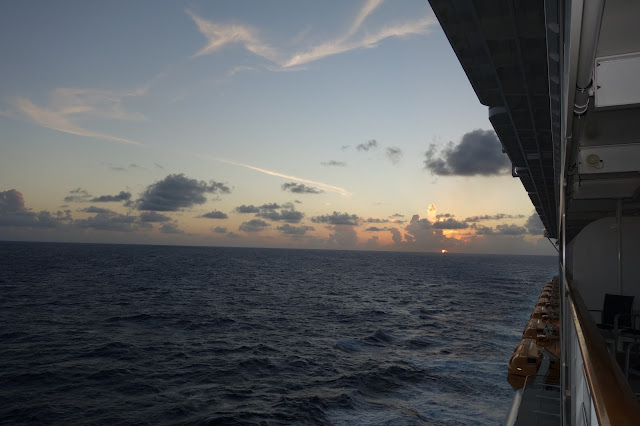 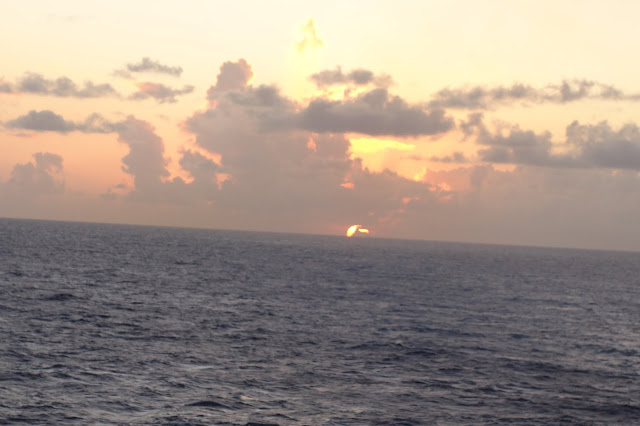 This night was formal night. Some people really go all out, tuxes, tails, ballgowns, the works. We're fairly casual in our daily lives, so we kept it simple but sharp. 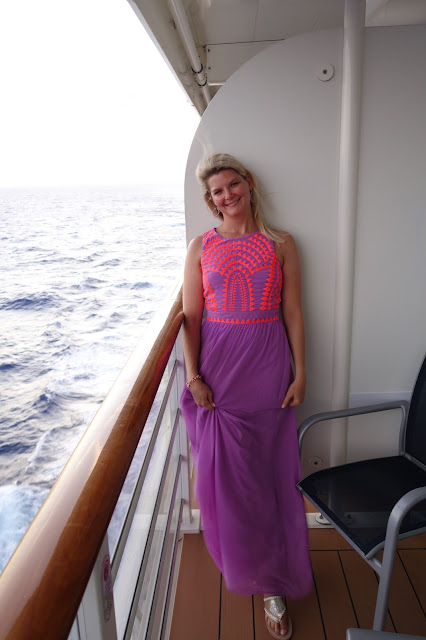 Gianni Bini Maxi Dress (back in stock in three different colors. This is SUCH a great dress- the mint color is on sale for $77. I've had so many compliments on this dress, and it sold out in a few days when it was released in the color I'm wearing, a year ago-- hurry over and grab one while you can!) 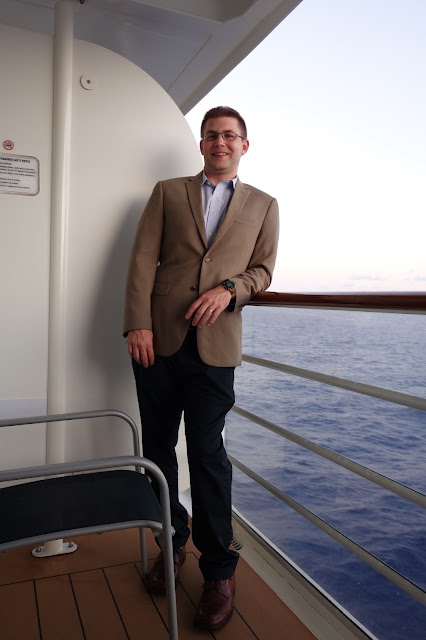 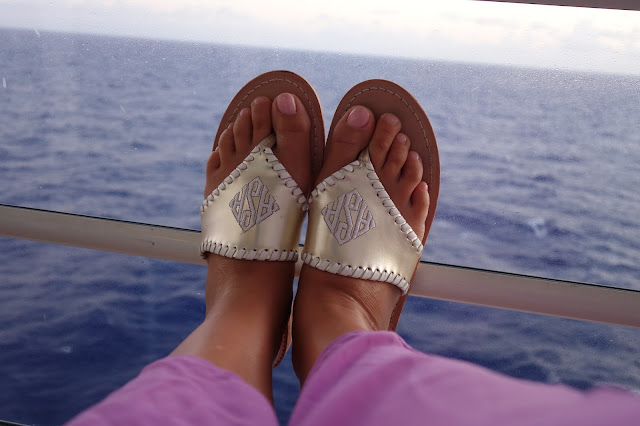 Here's a couple ideas for Formal Night- both on the casual end of the spectrum. 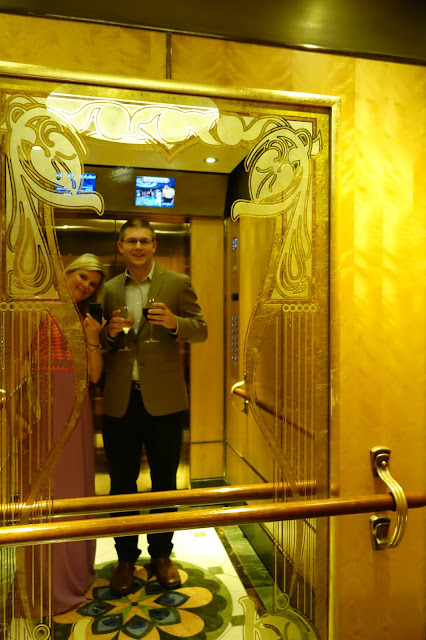 Another elevator selfie. This is our Disney Cruise Line Version of Spaceship Earth Selfies. We made our way down to the lobby to meet the Captain and take a photo with him. It was amazing- we had a short conversation with him then, and saw him once or twice more around the ship throughout our cruise. Each time, he remembered us and called us 'the Honeymooners.' We were really impressed that he remembered us out of all the guests on board.

Then we caught the first showing of Disney's Aladdin- A Musical Spectacular. I was surprised at how much John enjoyed this. He thought the Genie was hilarious.

This would be our first night dining in the rotational dining rooms. We were scheduled for Animators Palate; out of the three rotational dining rooms, I was looking forward to this one the most. Here is where you have the chance to draw a stick figure and see it come to life, animated on the screens surrounding the restaurant. It's also where Crush makes the rounds and interacts with guests if you're lucky enough to have a screen-side table. Since this was a longer cruise, and we were scheduled to dine at each rotational dining room twice, the actual animation segment was scheduled for our second seating at this restaurant, later in the cruise.

We scored a table right under a t.v. monitor and were lucky enough to have Crush come and chat with us! He made John stand up and say something along the lines of 'having a bodacious wife' or something to that effect, which just embarrassed me totally. He also gave us the monikers 'Jammin' John' and 'Awesome Ashley.' It was cute. 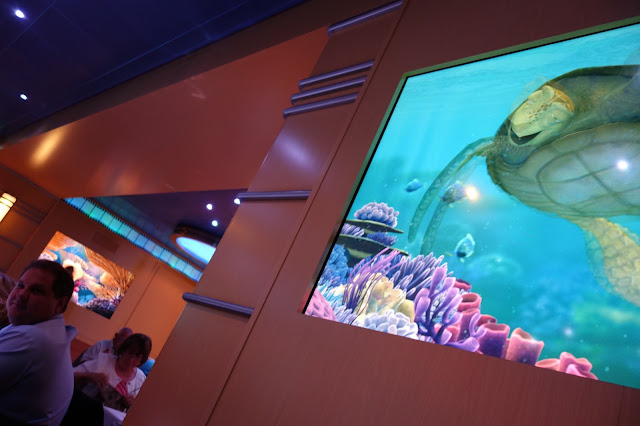 After dinner, we made the round for a few character meet and greets. Again, really not my thing, but it was neat seeing them in their finery. Flapper Minnie was just the bees knees. 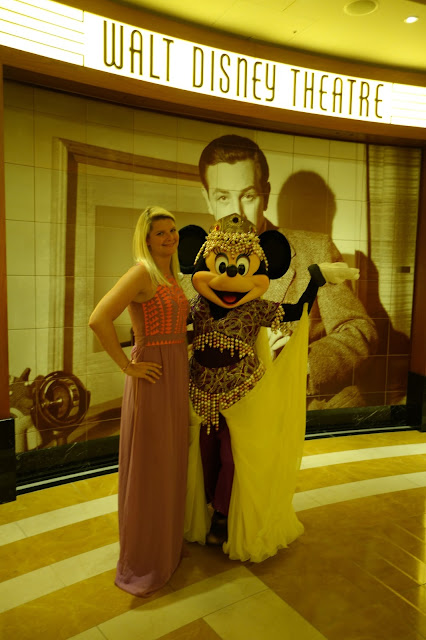 And of course, I had to get a photo with my #1 Duck in his tux. I mean, come on!! Two of my favorite gents-- three, if you count Walt in the background.

That rounded out a wonderful first full day at sea. 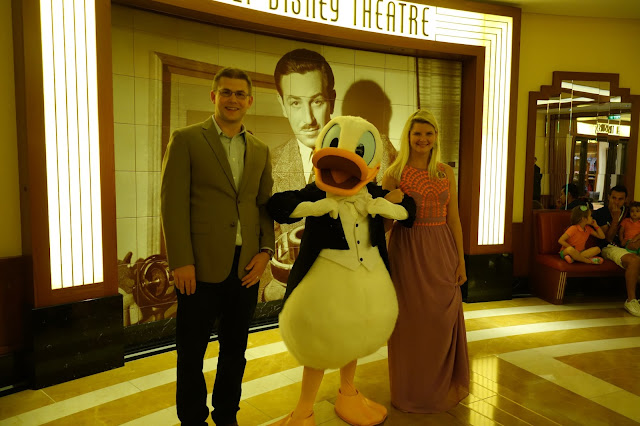