Hope you had a lovely Valentine's Day weekend, whether you're a single lady (or fella) or paired up. Either way, it should have been filled with love! 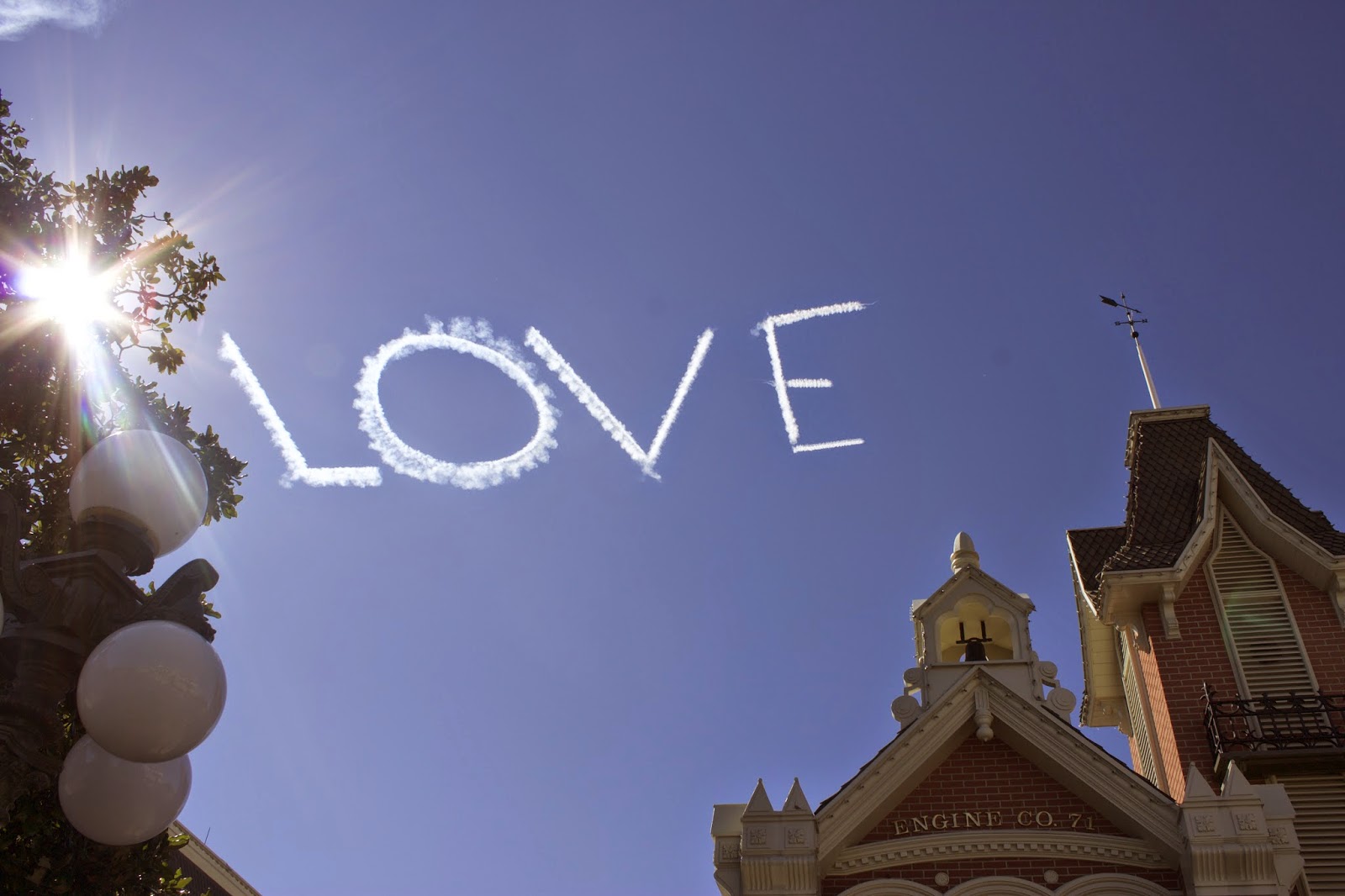 My weekend started out on Friday with a yummy red and pink breakfast on my new favorite plate. Cherries and homemade raspberry cream cheese on toast, yum! If you want some other inspiration for things on toast, check out Drea's blog here. 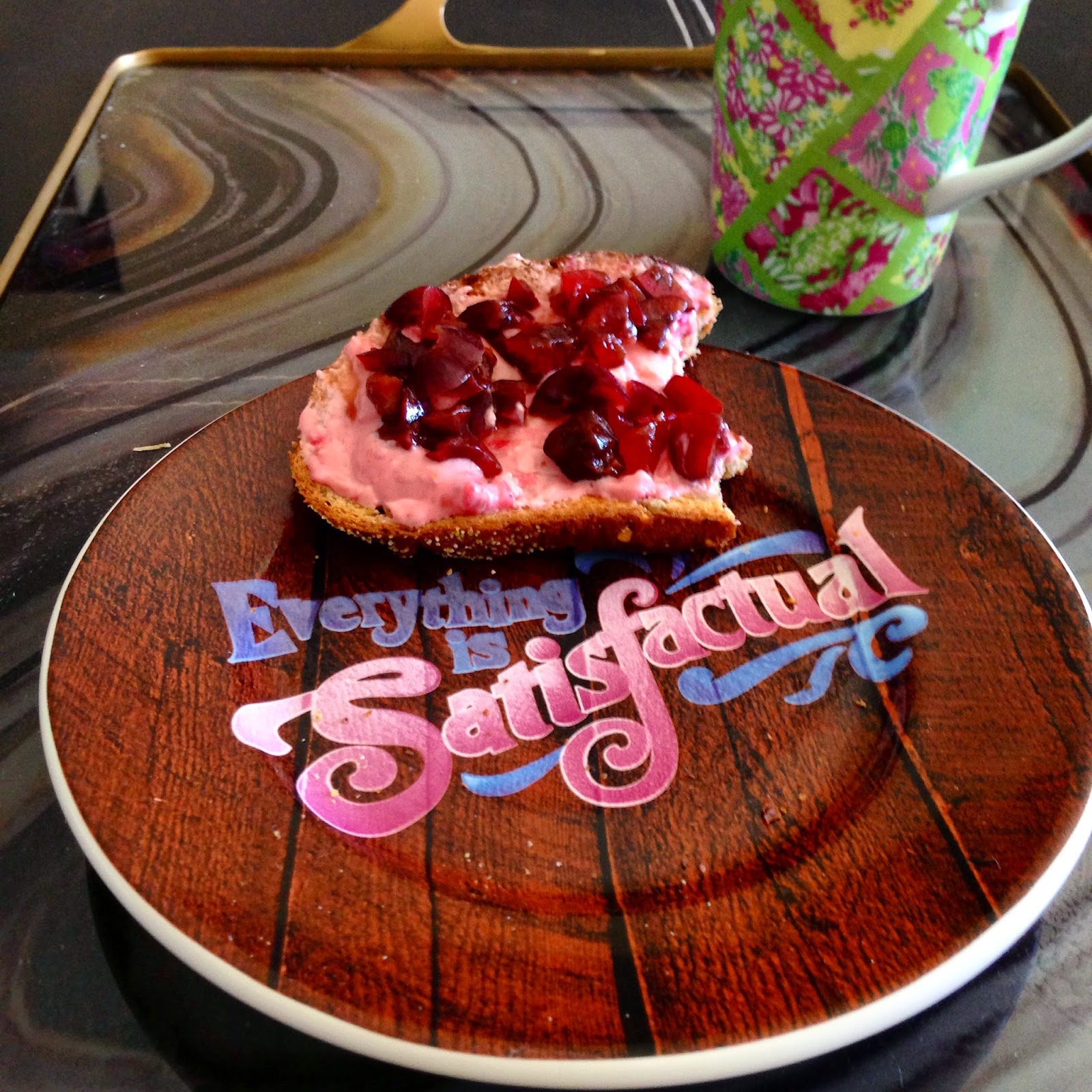 After breakfast, I headed to DHS for the new Tower of Terror merchandise reveal.

I noticed some seating has been added behind the new Starbucks Trolley Car Cafe. This is nice, but I was hoping they'd bring back the cool old car that used to be under the canopy. 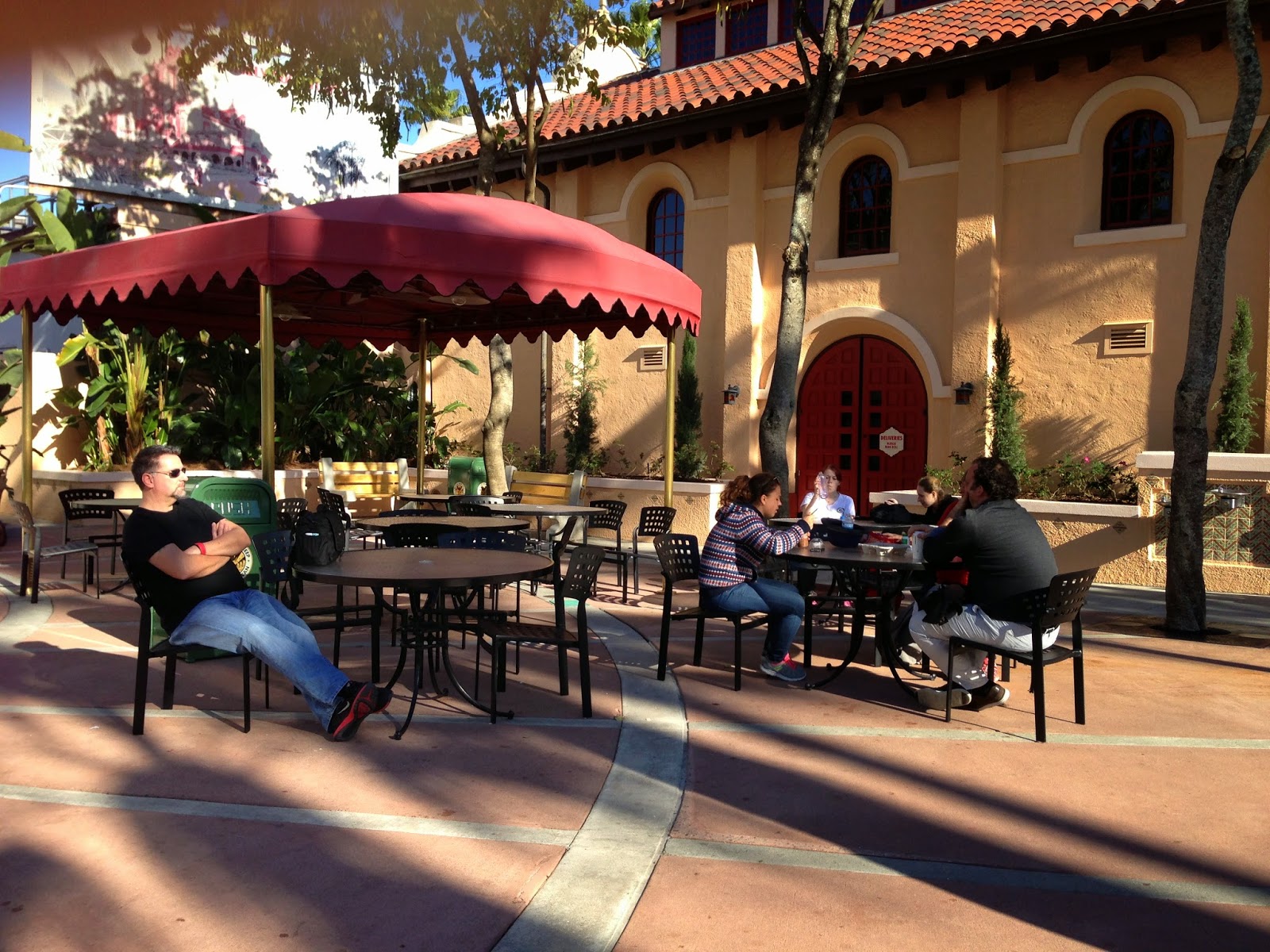 With a few minutes to spare before the event started, I walked back into the Fantasmic exit area and was happy to see Robin Hood out greeting.

I've said it before and I'll say it again; I'm really not much for character meet and greets, but this 'Characterpalooza' they have at DHS every afternoon usually has some unique characters. And no lines. Both times I've stumbled upon it, it's been around 3:30 or so. On this particular day they closed up around 4, but were open again around 4:30. 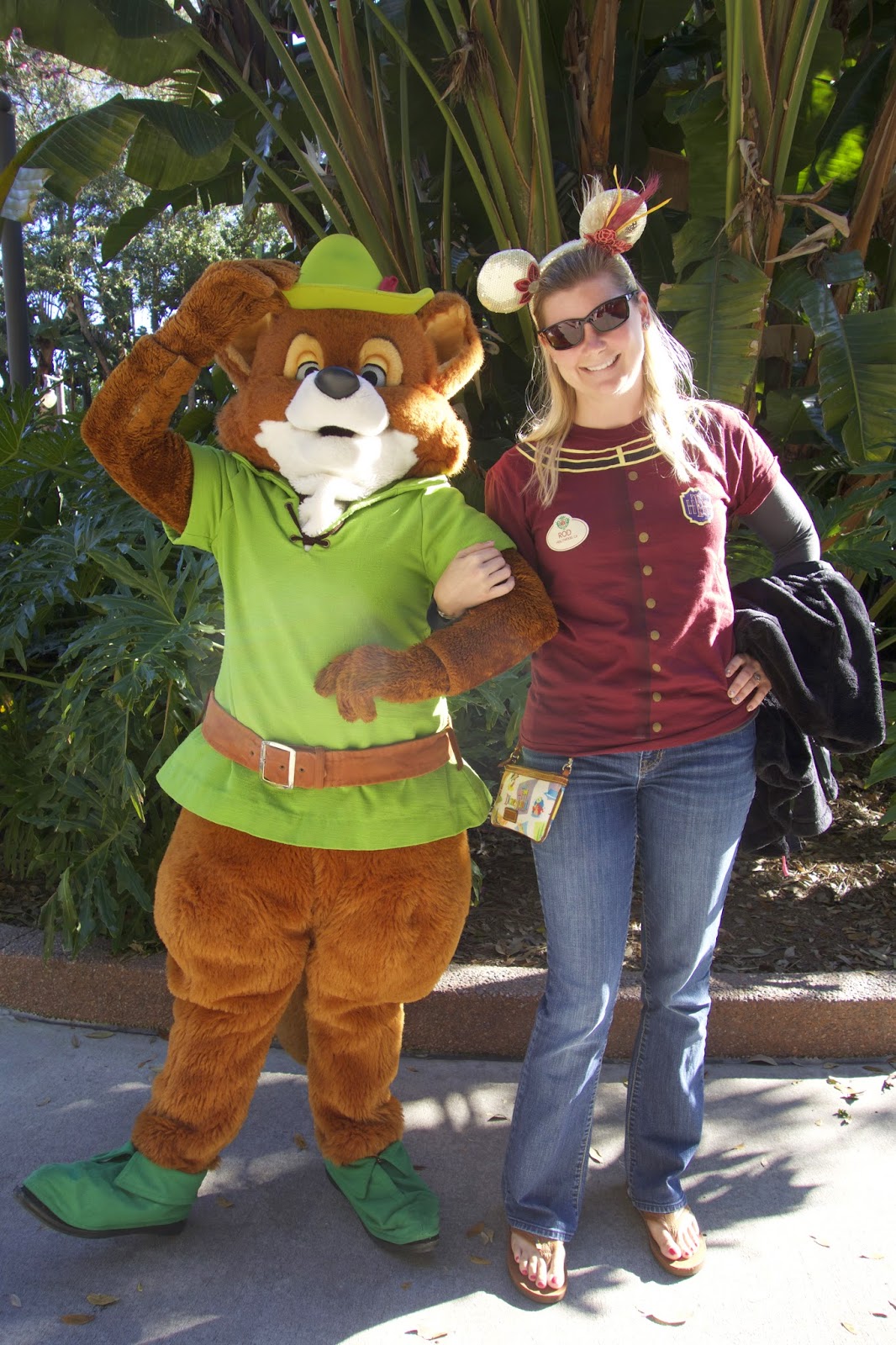 Who's the dork who dresses for ToT merch reveal? Me!

Here are just a few of the new items. I'm just now noticing that I featured three bags in my photo, but they were really cool! There were also several new t-shirts, glassware, artwork and more. The 'dropping character' line of merch (the one that shows Donald, Mickey and Goofy dropping in the elevator) has also been expanded to include an orange tshirt and a hoodie option. 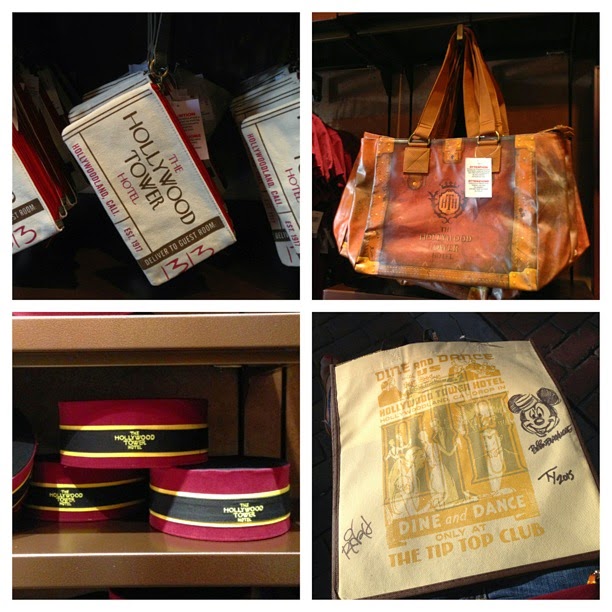 I got my goodies signed by the artists and designers. I also got a few things for my ToT obsessed niece, including the sweatshirt and wristlet, below. 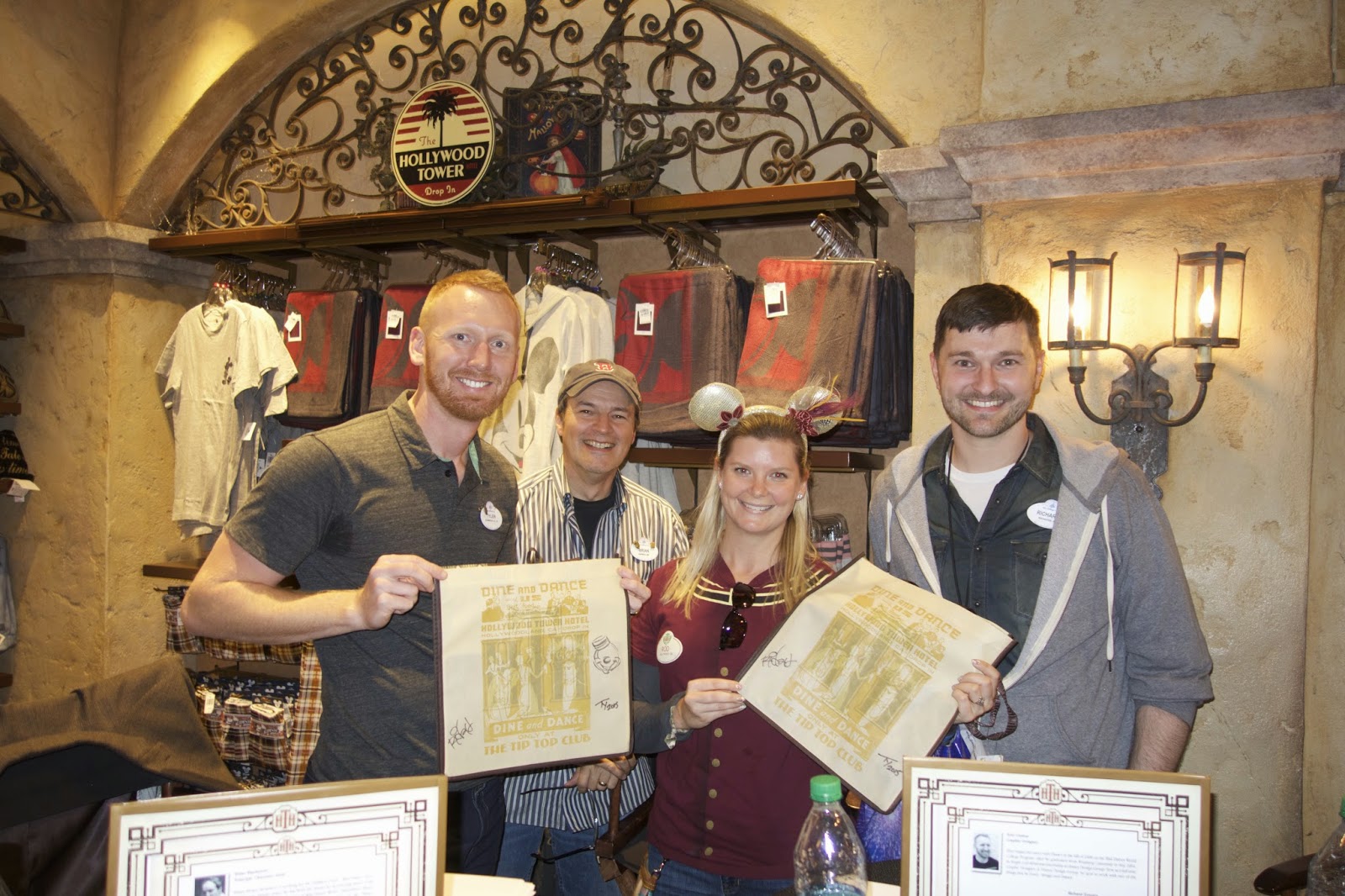 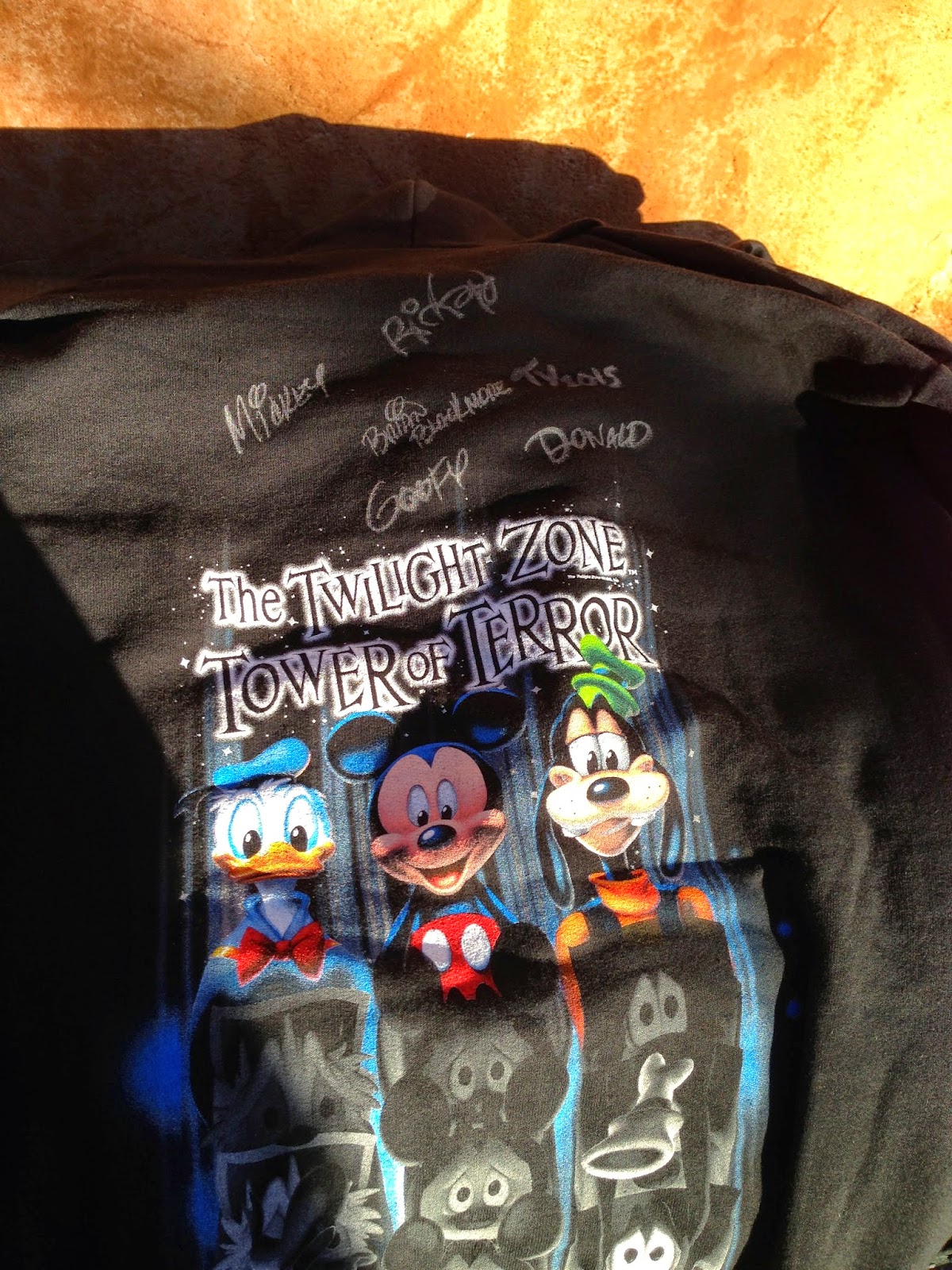 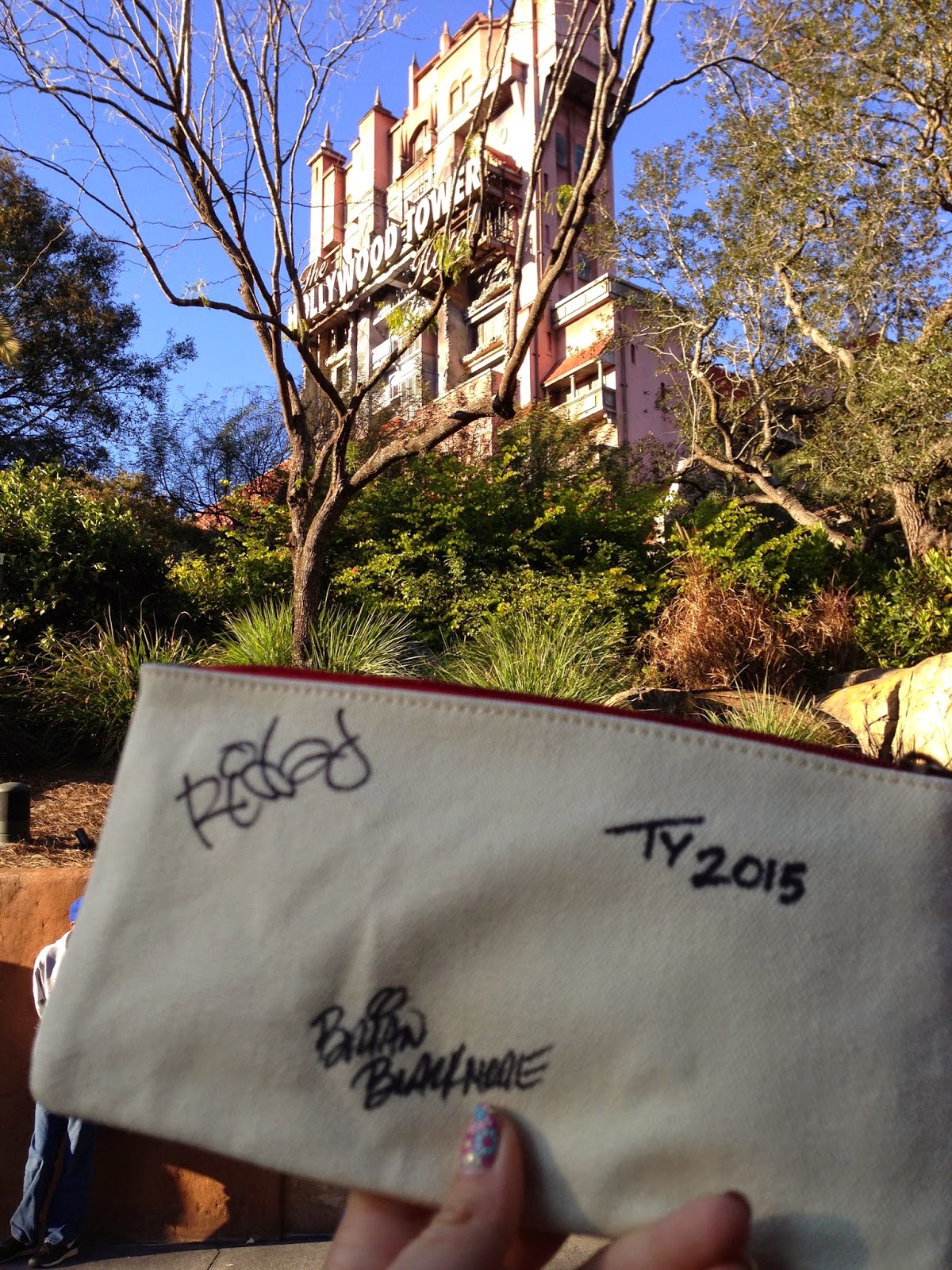 Saturday was Valentine's Day, so my valentine and I went to Epcot to celebrate. We had dinner reservations at Shula's steakhouse, so we planned to circle the World Showcase and make our way to dinner later in the evening. 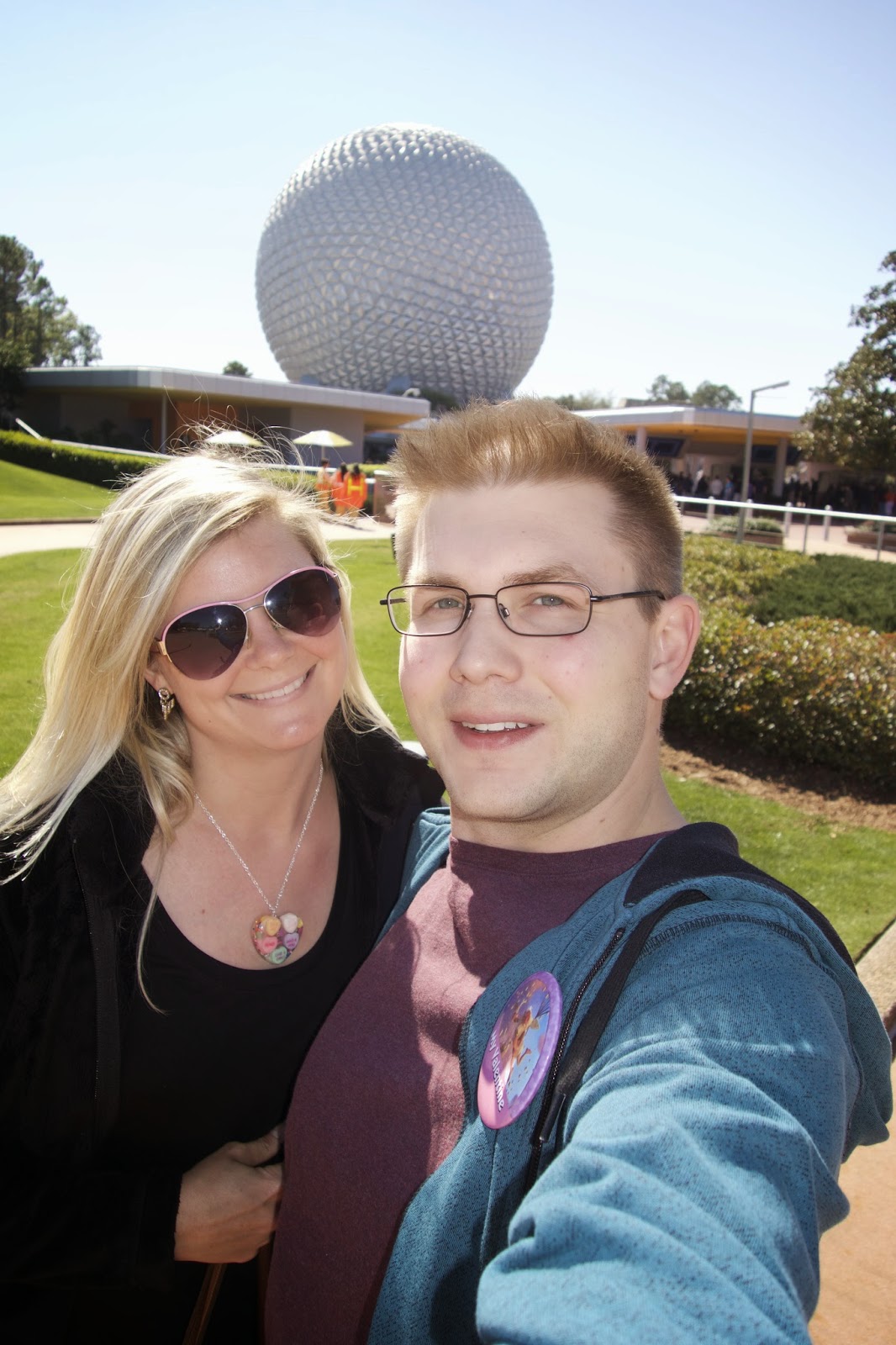 We started with beers and nachos in Mexico. 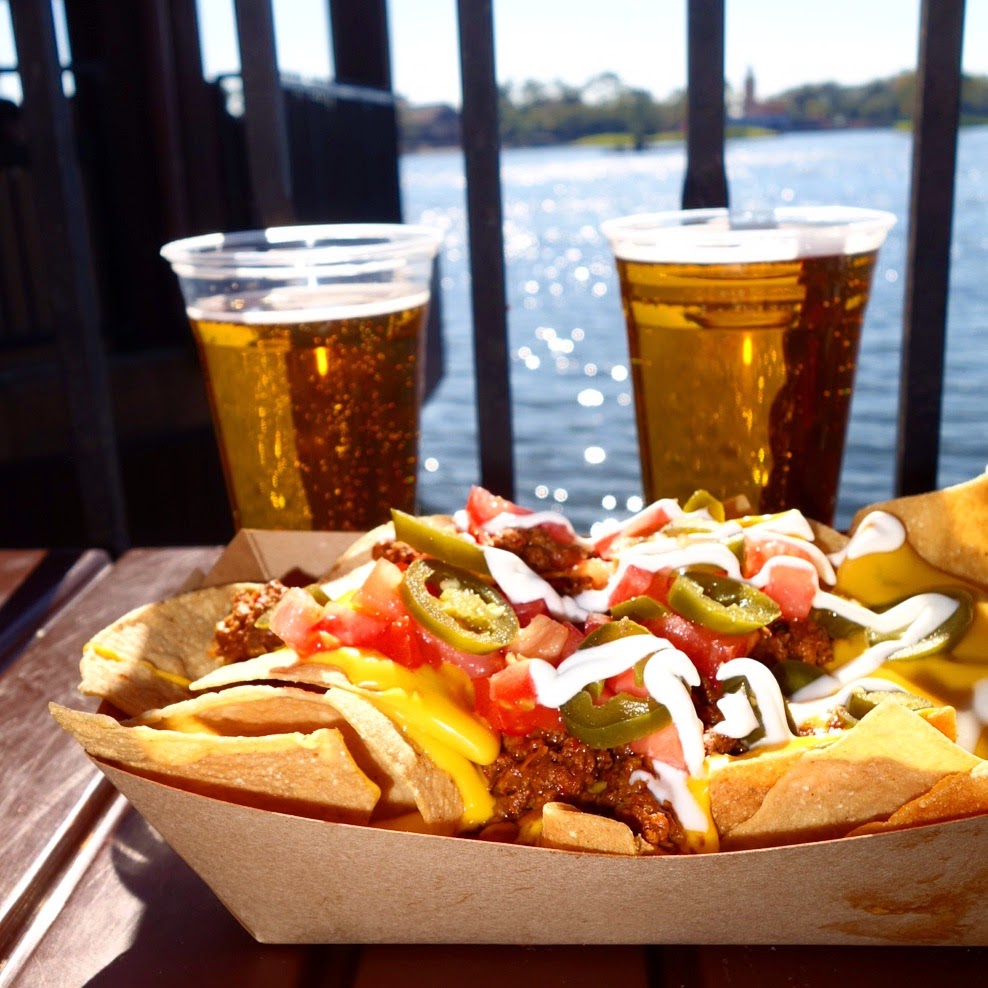 We also visited our friends in the tequila cave. The park was packed-- the line for the to-go bar at La Cava del Tequila was at Food & Wine levels. Tip: When the line is pretty lengthy, it's always a good idea to have one member of your party stand in it, while another goes to check in with the hostess for a seated table. On this particular day, we lucked out and were escorted to a table for two minutes after arriving. So, we sat and enjoyed our tequila, rather than stand in line and have to slam it at the bar, or find a place to perch in the crowded Mexico pavilion.

After a tequila shot, naturally it was time for a photoshoot. 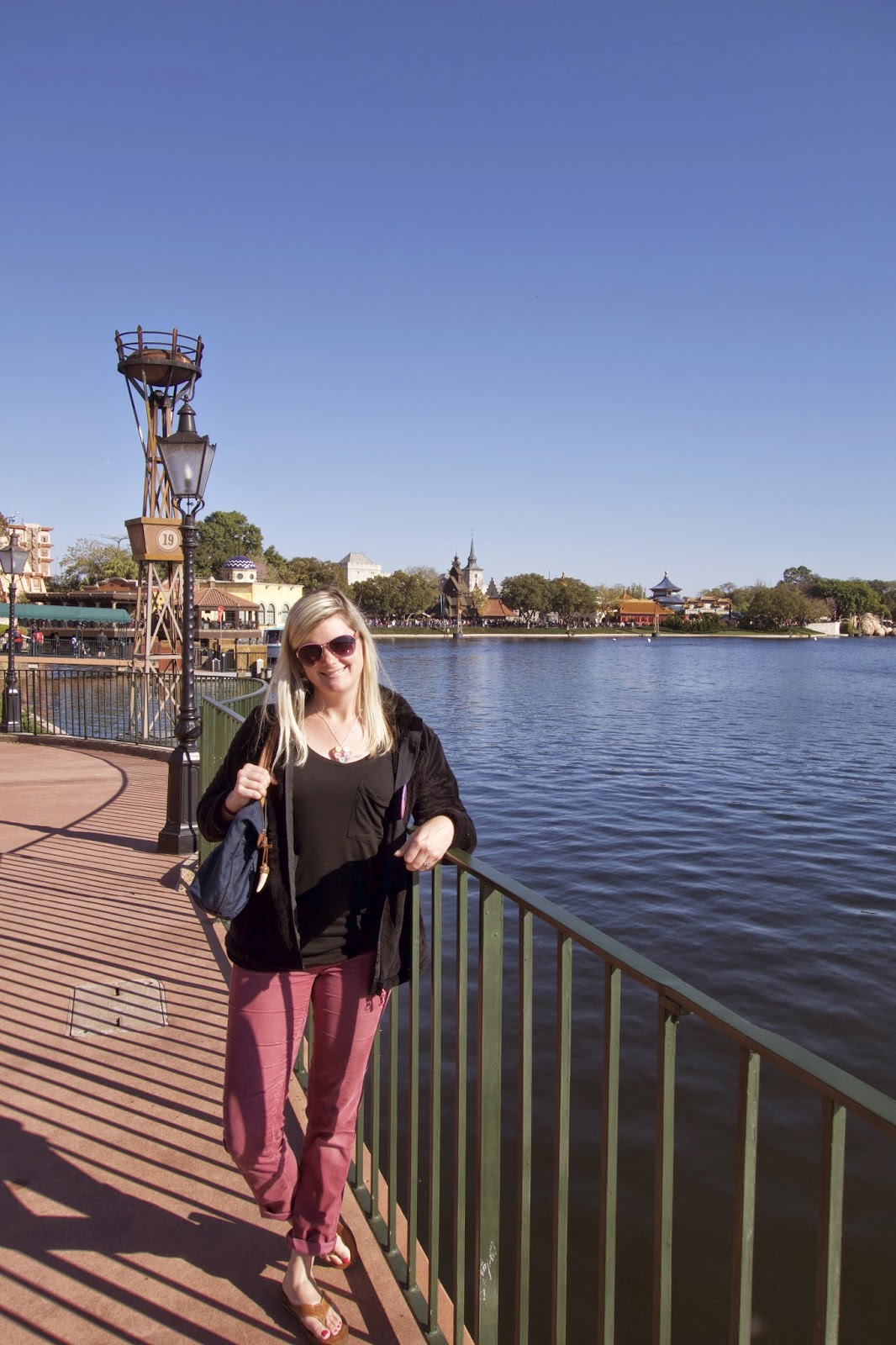 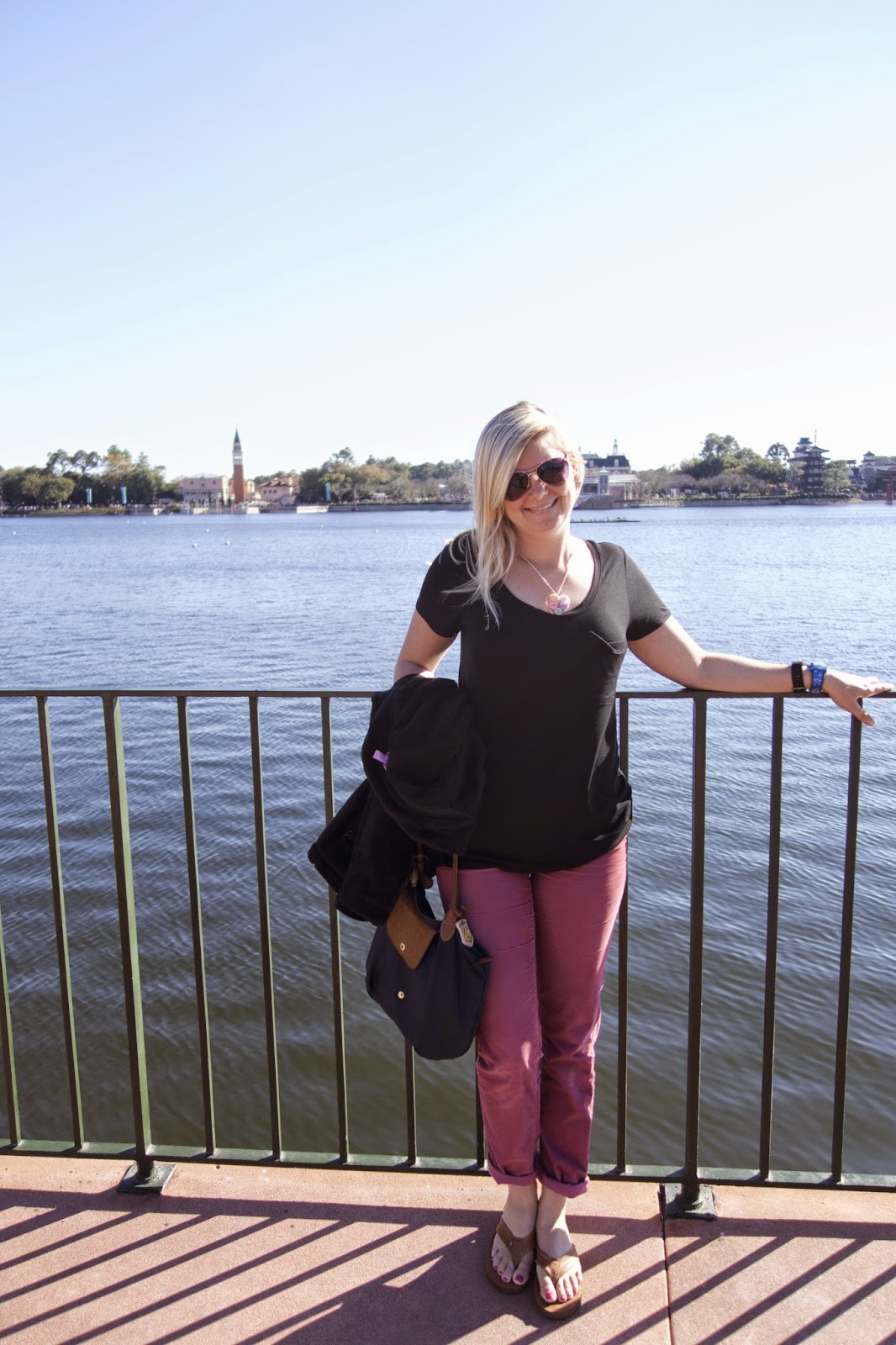 Mossimo MicroModal Tee with pocket (this is one of the two I raved about in this post) // Ann Taylor Loft Modern Skinny Corduroy Pants (old, similar here and on sale for $32.99)  // Rainbow Flip Flops // Longchamp Le Pliage Bag 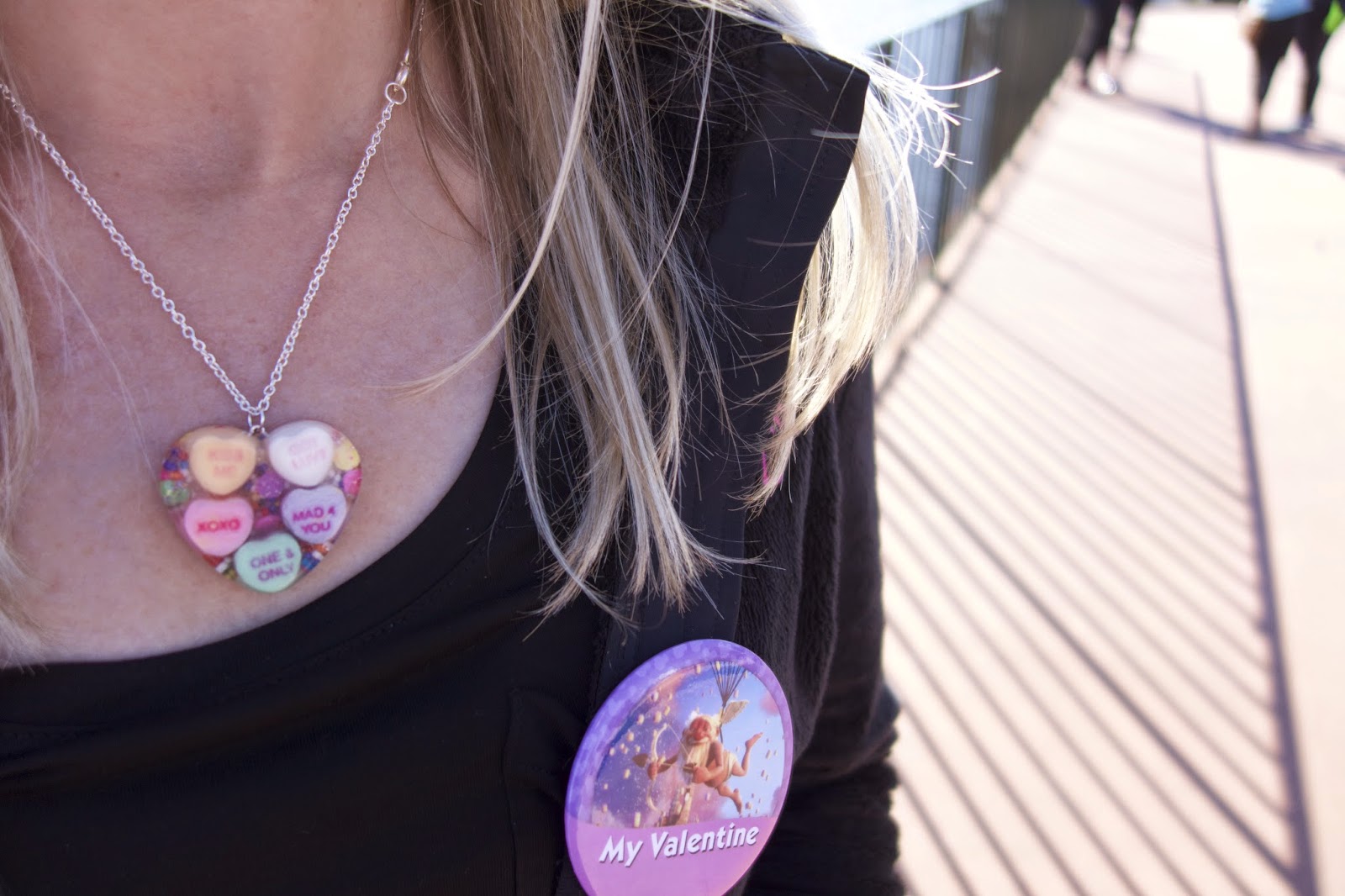 Conversation Candy Hearts Necklace by @sweet_cheeks_  // 'My Valentine' button by @caseyandthebear. Melissa posted about these adorable buttons the other day. Check out the many options available.

We made our way around to France and splurged on two glasses of Veuve Cliquot. The photo below sums up so many of my favorite things: Epcot, February in Florida, Veuve, spending Disney time with John, and Friendship Boats. 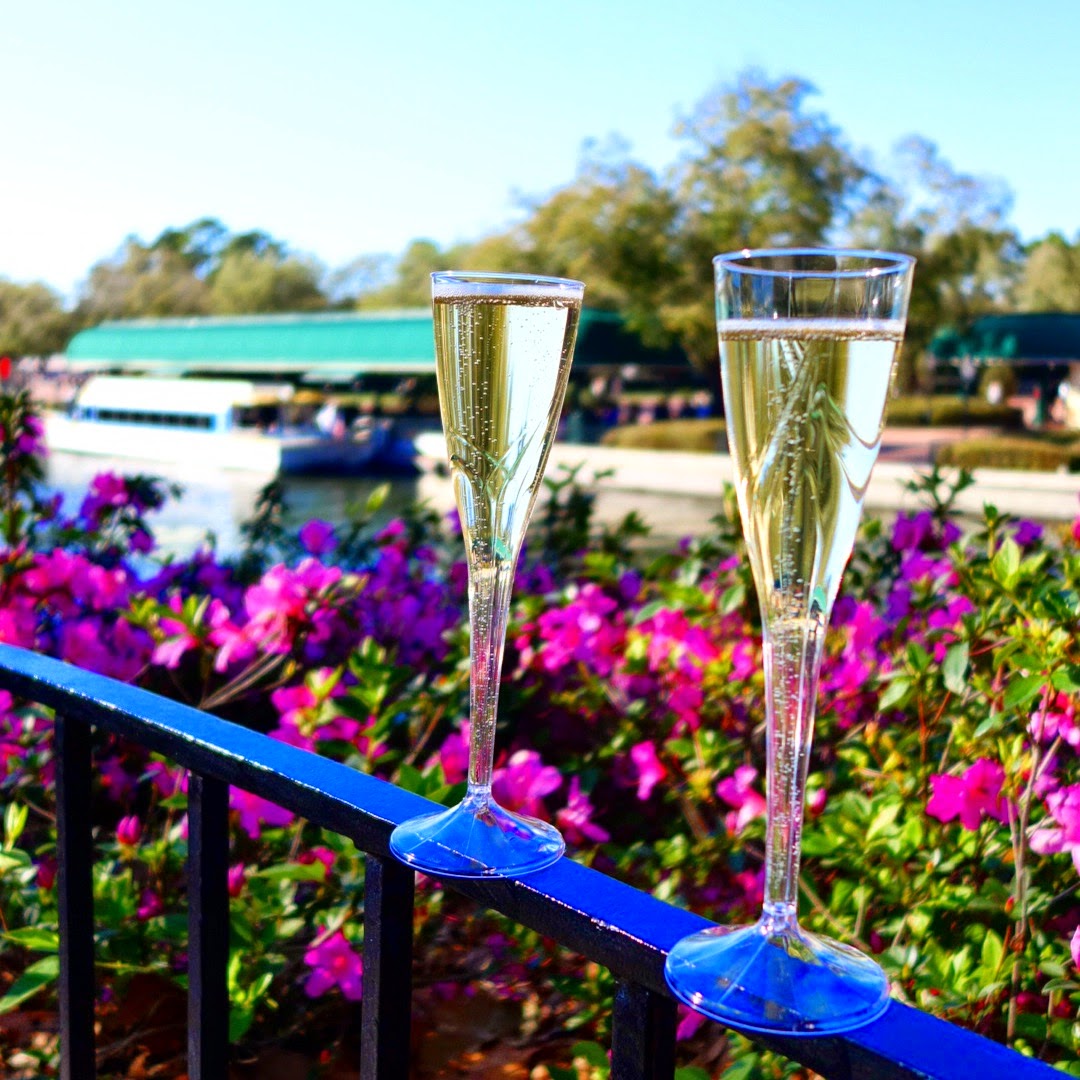 The craziest bottle of Veuve I've ever seen. A girl can dream, right?! 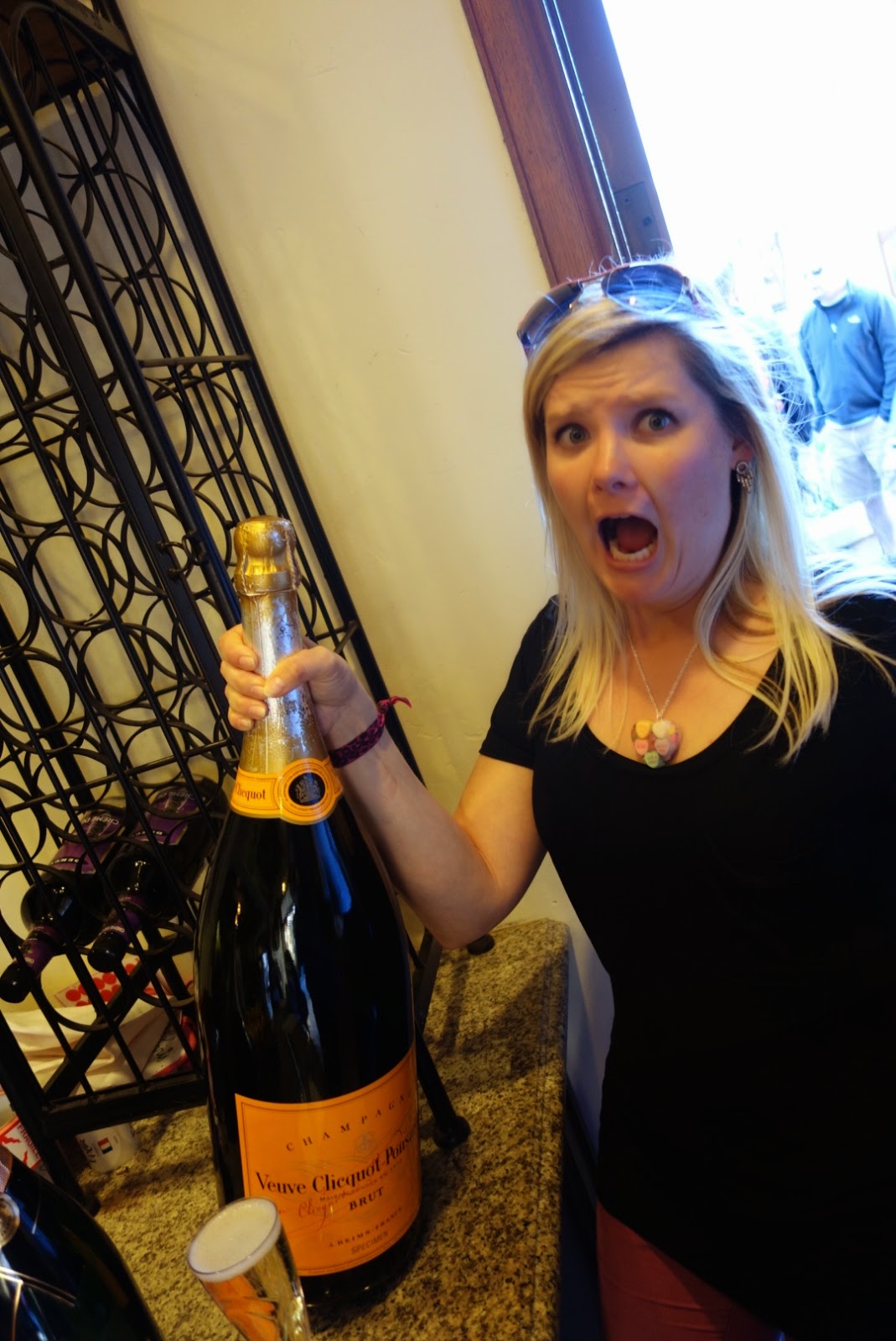 We sipped our way through Morocco, Japan and America until we made it to Italy.

Promptly after this following photo was taken, I had a wipe-out of epic proportions. Defying my own logic, I was 'walking and phoning' and missed the last step while walking down the little raised platform area. Wipe. Out.

I could hear several audible gasps around me, and a few people came to my side to ask if I was okay. The only thing injured was my pride, aside from scraping up the top of my foot and chipping my toe nail polish, damn it! Amazingly John didn't notice it happen, even though he was in line for limoncello a mere 10 feet away. His nose was buried in his phone too. Just as well, really. It was super embarrassing. 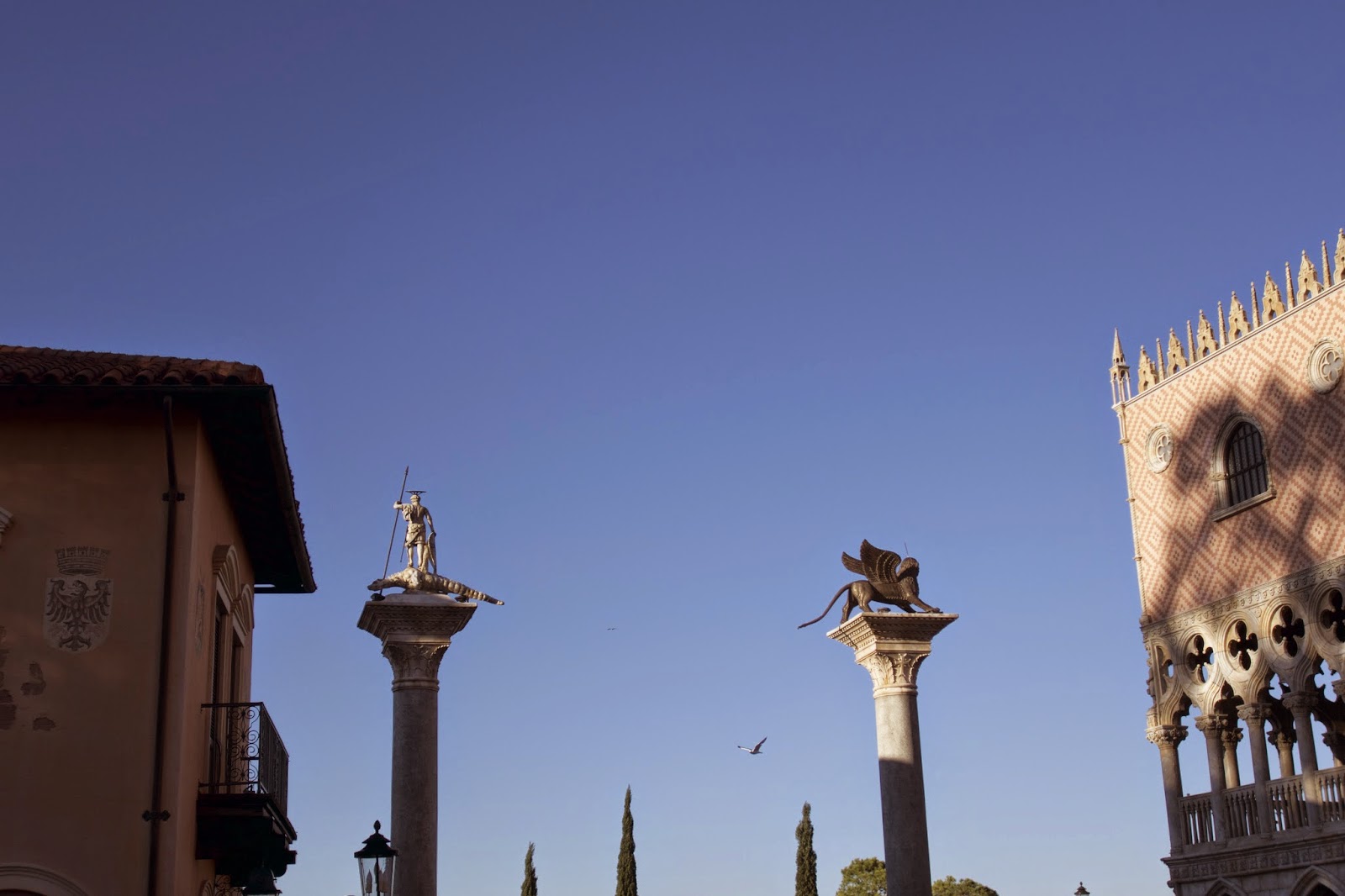 John and I made a new discovery that day-- orangecello! It tasted like Tang vodka. 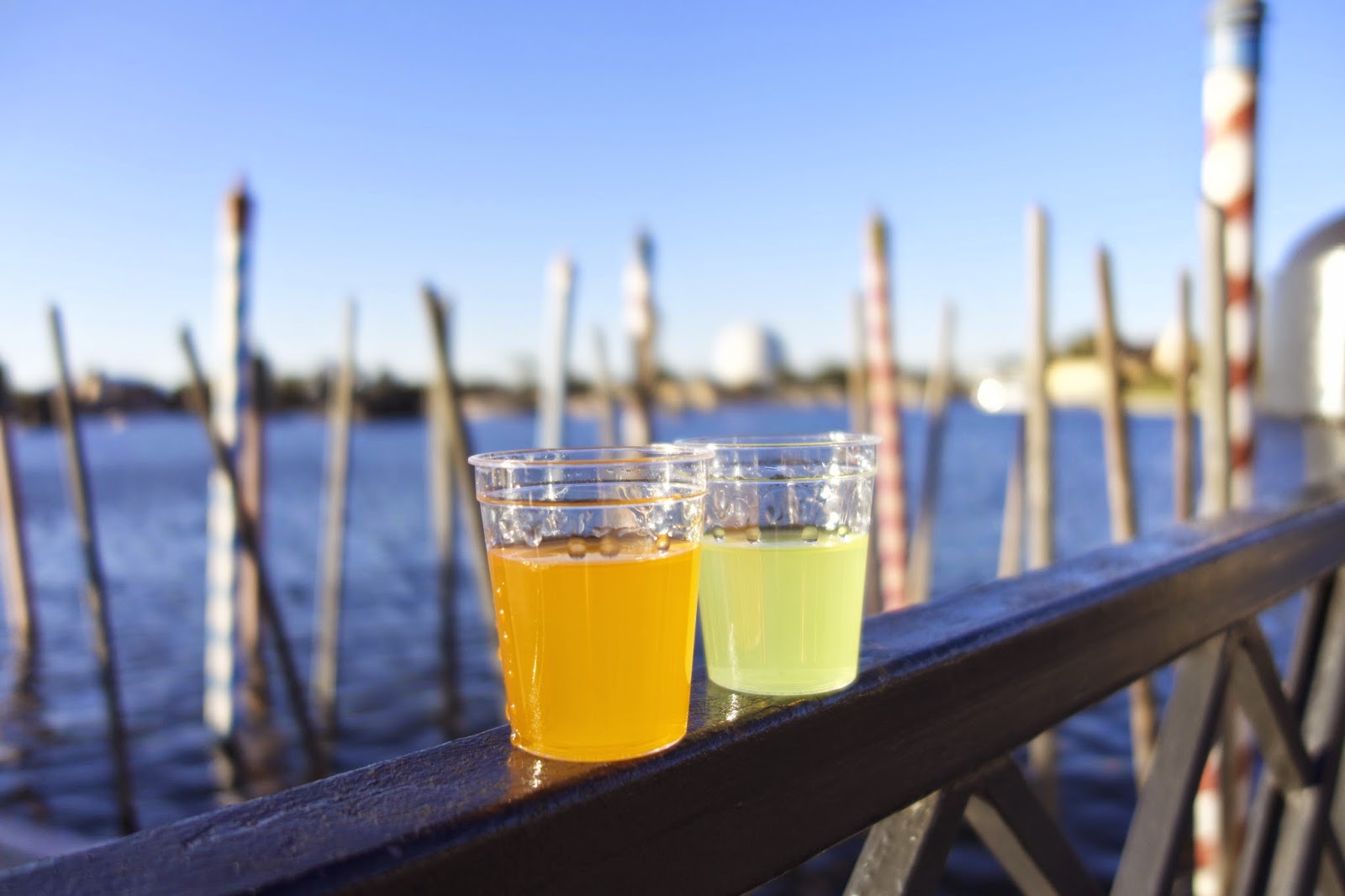 We doubled back at made our way back through America, where John modeled the latest cardigan style. 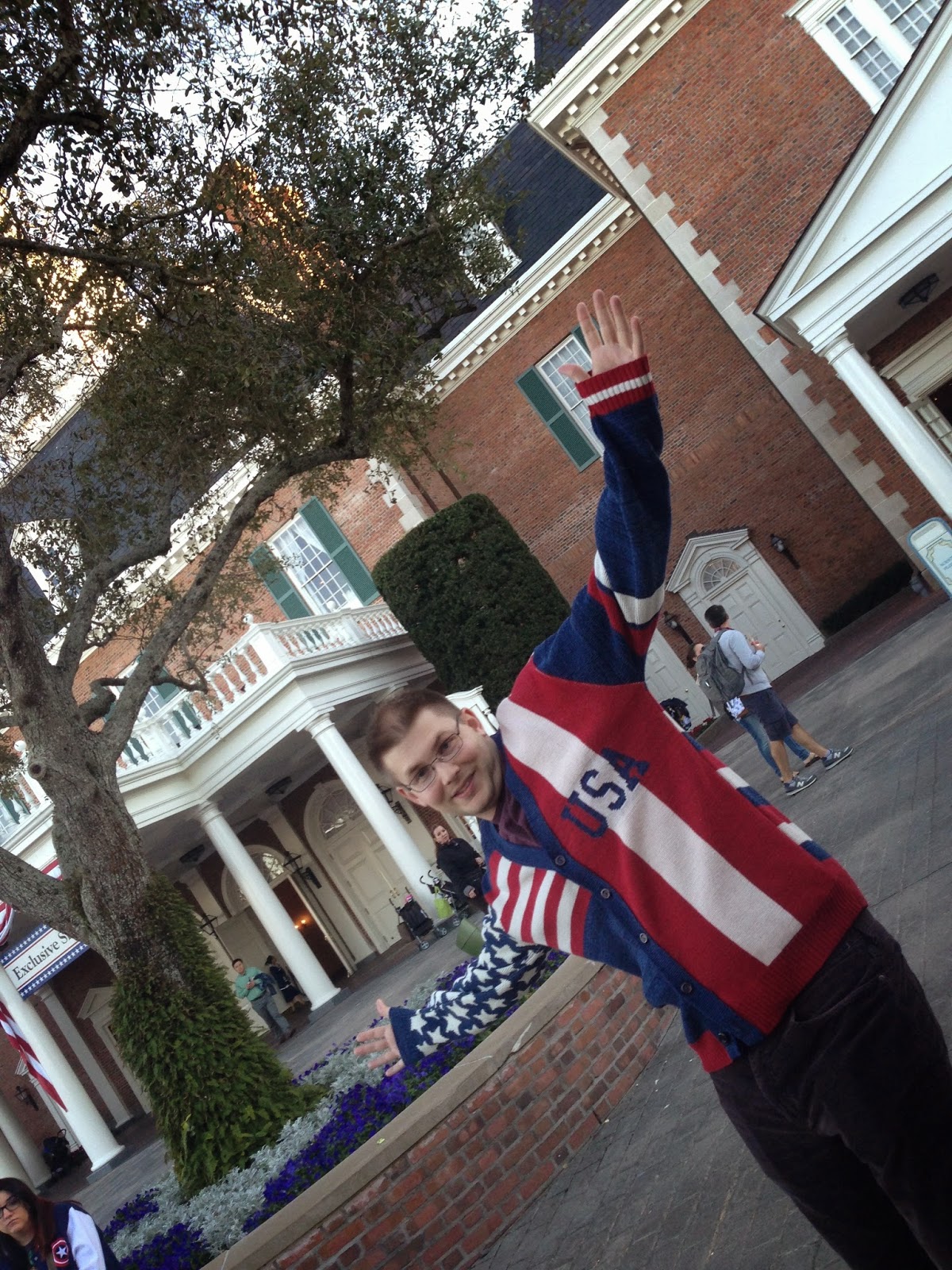 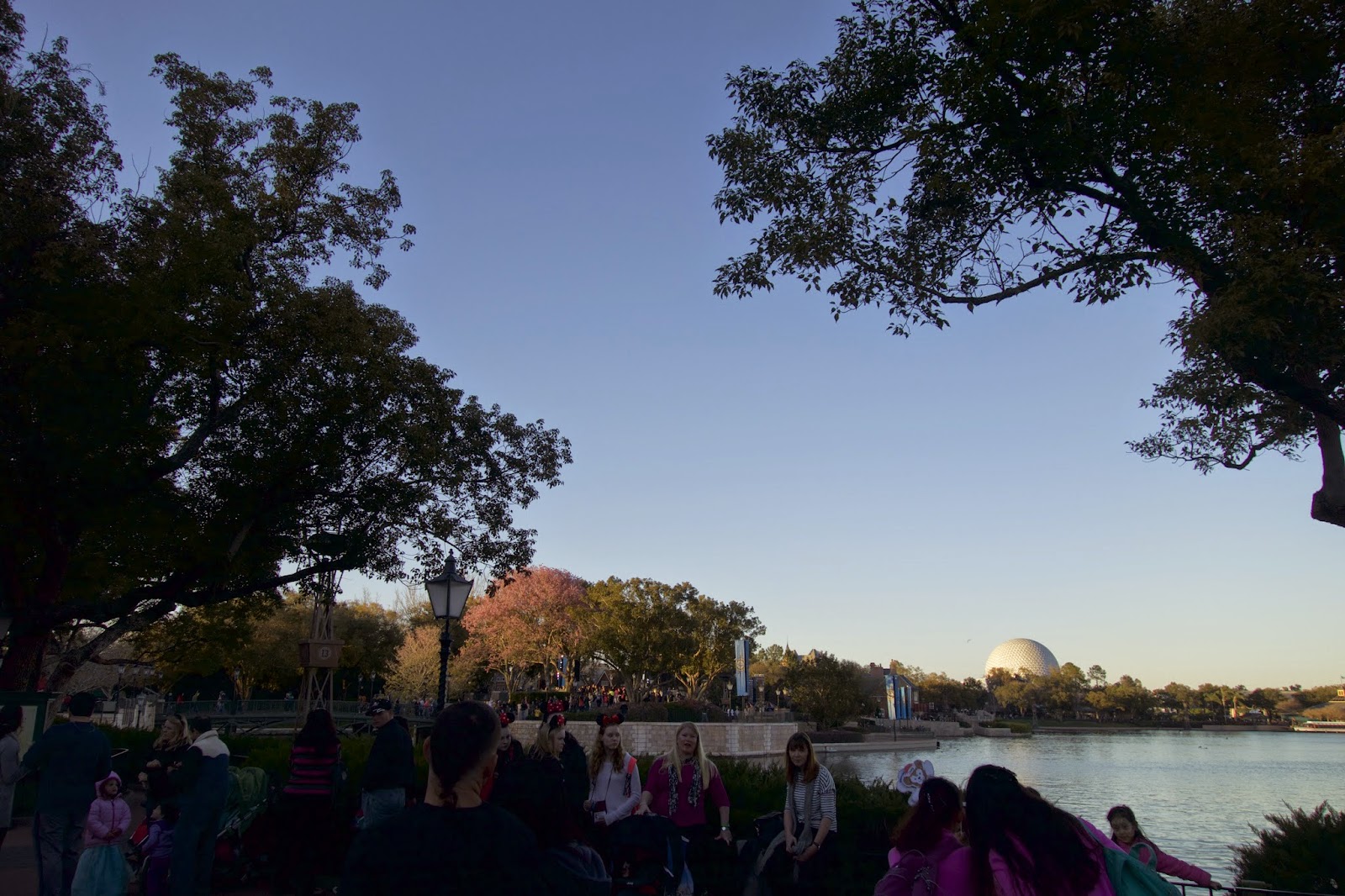 We made one final stop in Rose & Crown.

Funny story here. As we walked in, some guy mentioned being a Florida State Seminole fan. I did the Gator chomp to him, which prompted a few others in the bar to do the same. This set off the Seminole fans doing the tomahawk chop and chant, which in turn egged us Gator fans on to do the 'it's great to be a Florida Gator' chant. All of this chanting and cheering had gone on for no more than twenty seconds when a Manager came out of nowhere and told us all to stop it immediately or we'd be escorted out of the park.

A while later, the chanting erupted again (this time NOT instigated by me, I promise!) and he swooped in to shut it down again. It made me wonder if they're taking the same stance against the Brazilian tourists, which I hope they are. 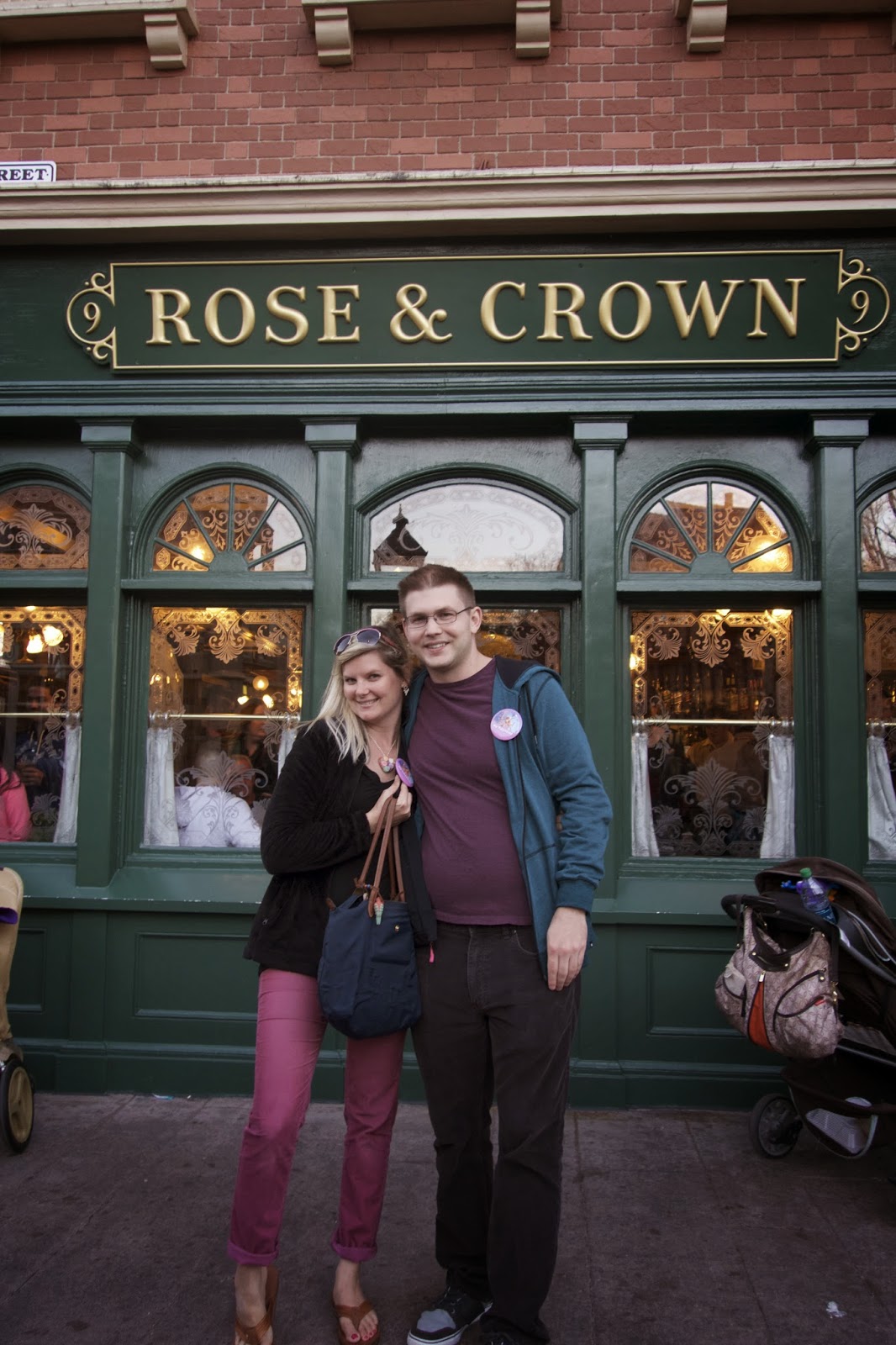 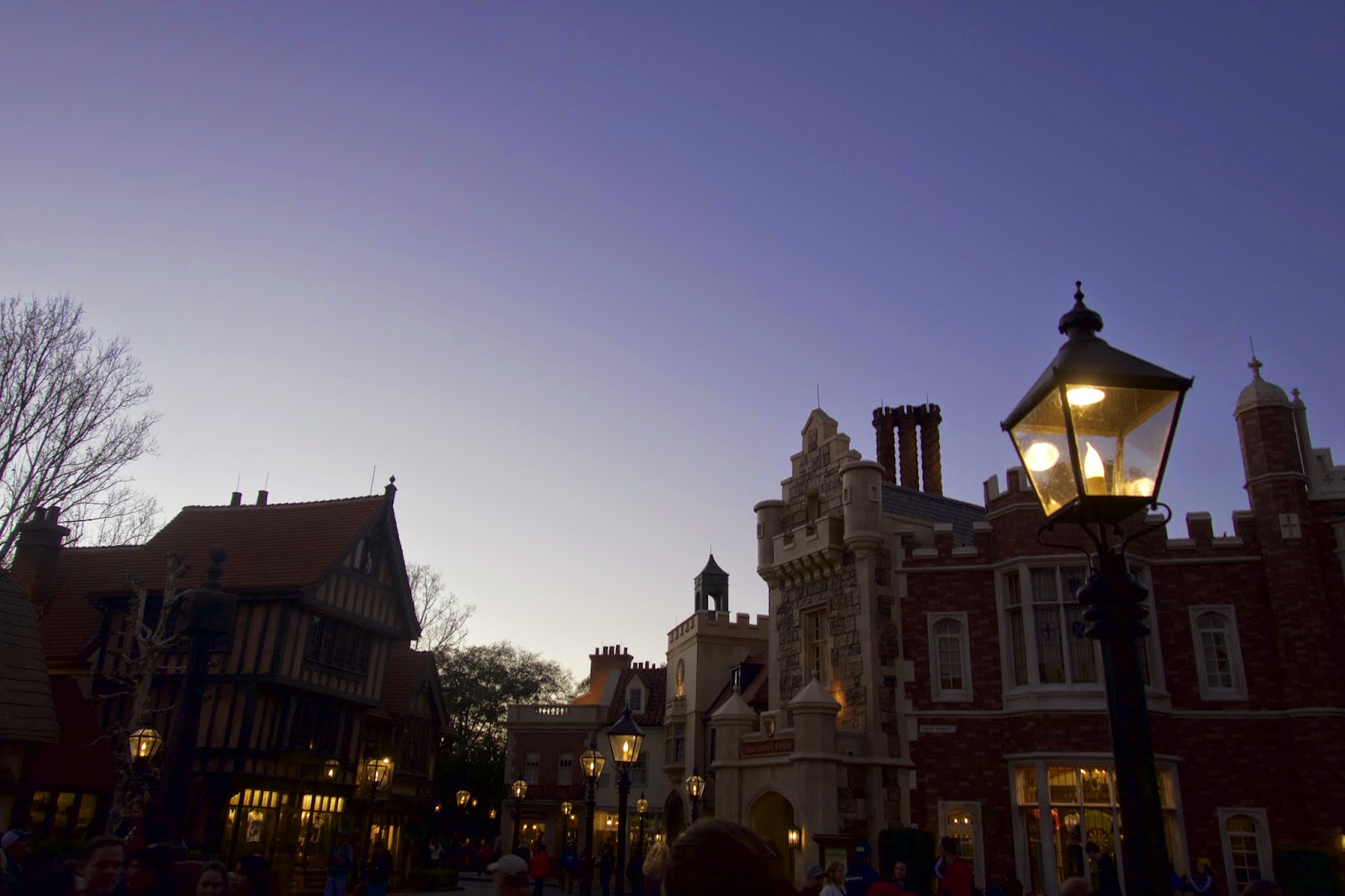 It was time to make our way toward the Dolphin resort for dinner at Shula's. 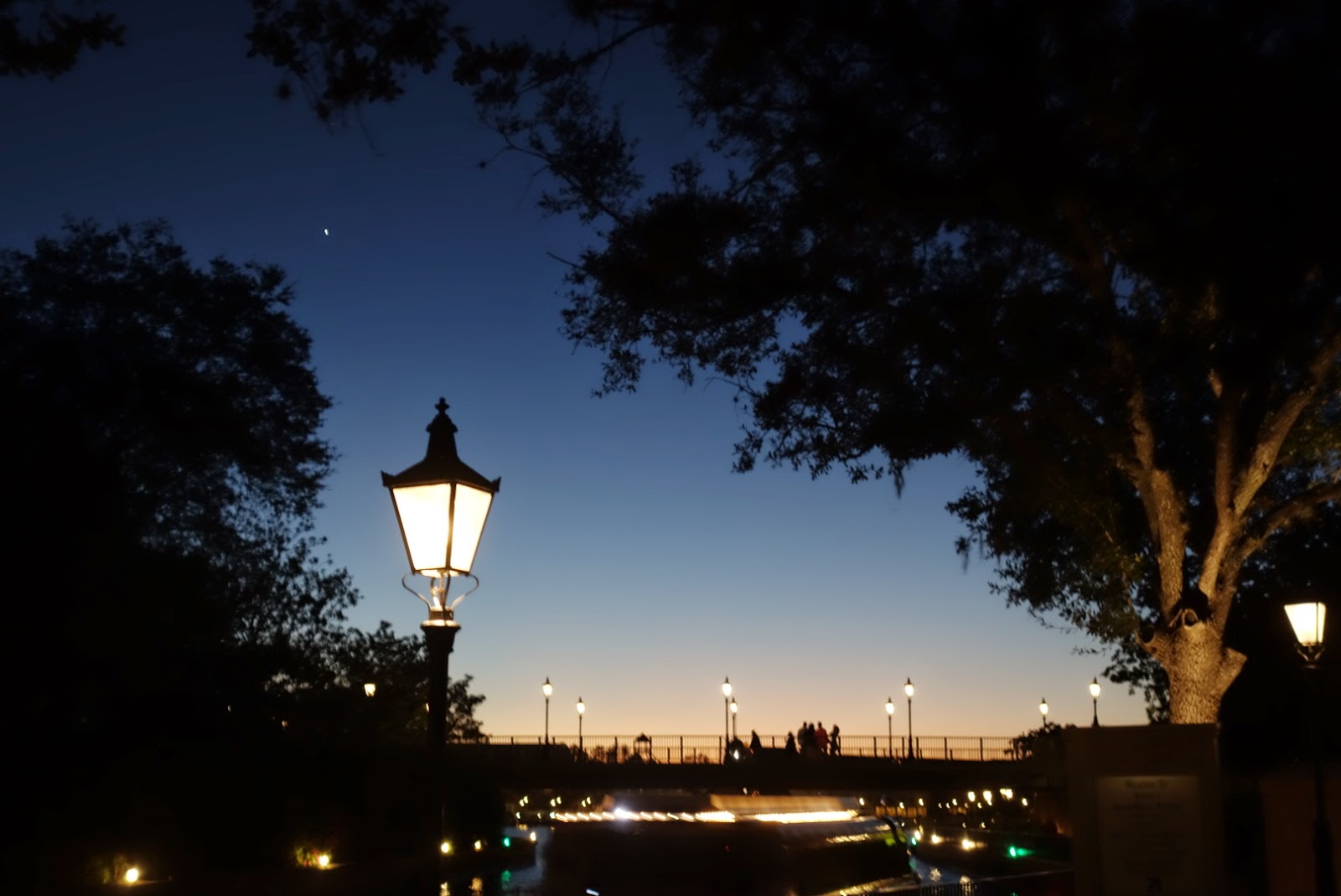 We shared a nice bottle of wine. Our dinners weren't all that great. We both ordered our steaks medium-rare, and they both came out medium-well. We had a side of steamed broccoli which was delicious, and John had a twice baked potato which was just okay. We also each had a wedge salad that was drowning in dressing.

The flavor of the steaks were good, but way overcooked. A manager came around to see how our dinners were, and I (nicely) asked him if he thought our steaks had been cooked as we ordered. He vehemently agreed that they were overcooked, and offered to take them off the bill for us. We declined. So you can imagine our surprise when the bill came and our steaks had been removed. It was unnecessary but a much appreciated gesture.

Would I go to Shula's again. Eh, probably not. The best steak I've had on Disney property was at Yachtsman's Steakhouse, and would go back there in a heartbeat. 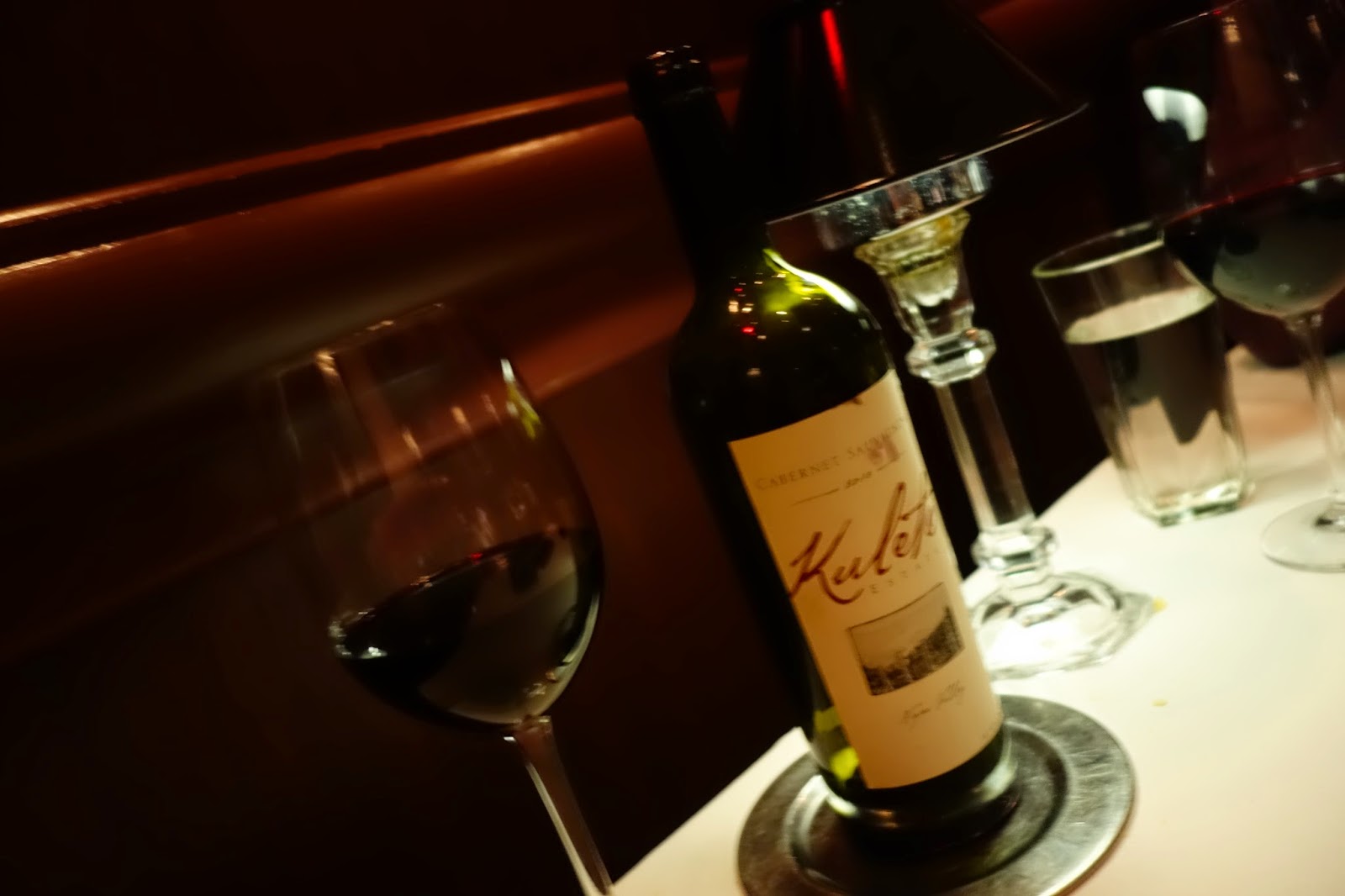 We ended up taking a cab home, and returned for John's car the next morning. After such a fun-filled Valentine's Day, and the combination of tequila, beer, champagne, vodka and wine (over the course of nine hours, but still...), all of Sunday was spent much like the cat, below. Except we ordered Chinese and pizza, while she was stuck with dry cat food.

How was your Valentine's Day? Thanks for reading!

Posted by Dressing for Disney at Tuesday, February 17, 2015