True happiness is sharing the things you love, with those you love. So you can imagine my excitement when my mom came to visit and we planned to spend the weekend at my favorite place- Walt Disney World!

She took advantage of the Florida Resident Discover Disney ticket, opting for the 4-day ticket plus park hopper option. Pretty sure we'll just bump her up to a Seasonal Pass and apply the Discover Disney ticket purchase toward that, seeing as what a nice time we had and the fact that she only lives an hour away.

Our goal was to take it slow and kind of do whatever we felt like doing, without any FastPass+. Oh, and to eat and drink our weight over the course of three days.

We started off at MGM on Friday afternoon. I was eager to show Mom the new Starbucks and enjoy the ambiance of Echo Lake. Rumors are swirling that it's not going to be around in the very near future. (Sadness!)

We each grabbed a coffee from Starbucks, then headed down Sunset Blvd. to pick up some snacks from Anaheim Produce. I love these little fruit stands in each of the parks for light, nutritious and healthy bites. It's also the place to get a delicious Disney pickle. We selected some hummus and pretzels, carrots and celery with ranch, and I got a Magic Hat #9. Then it was off to the lovely Echo Lake seating area. 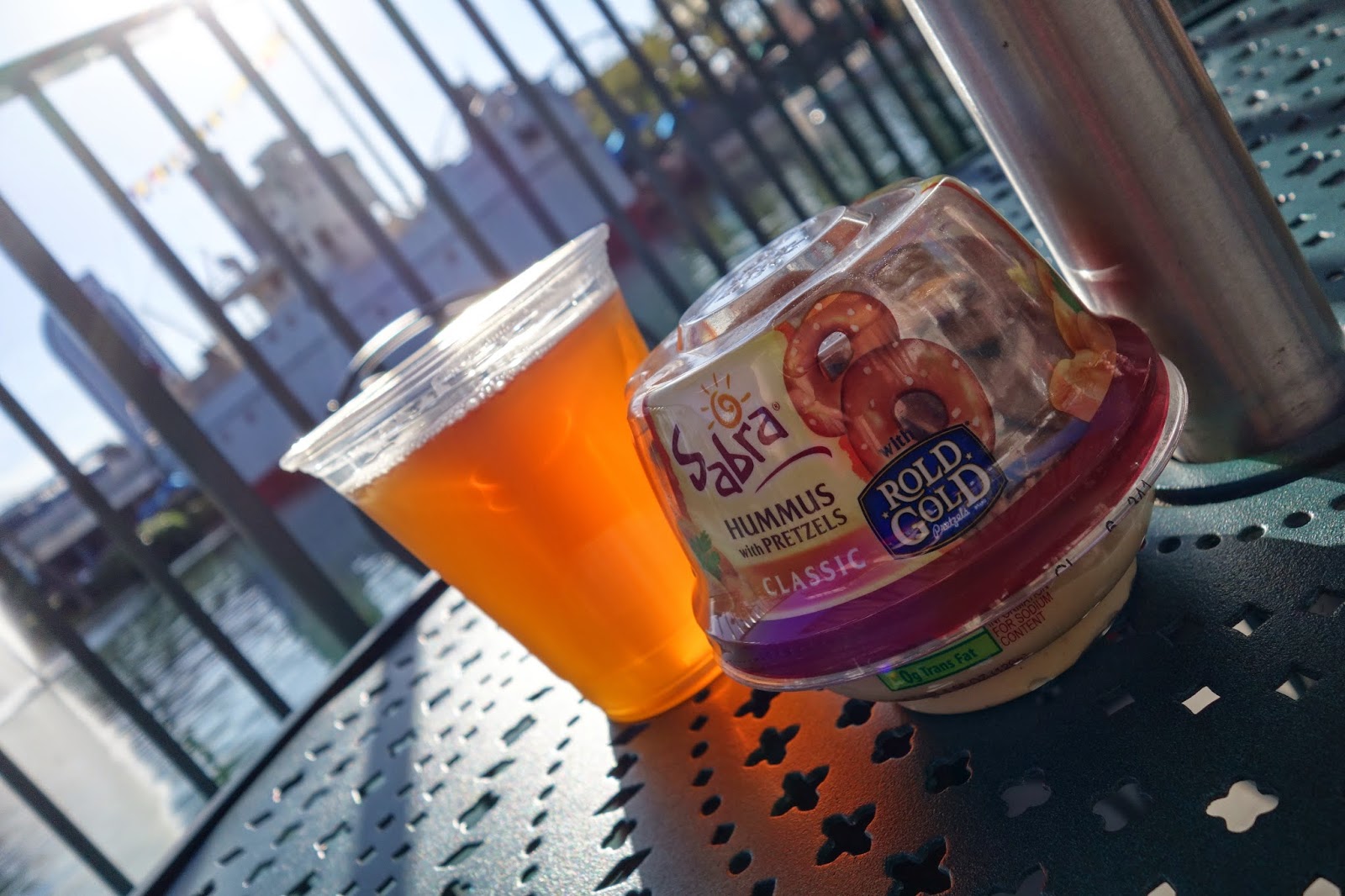 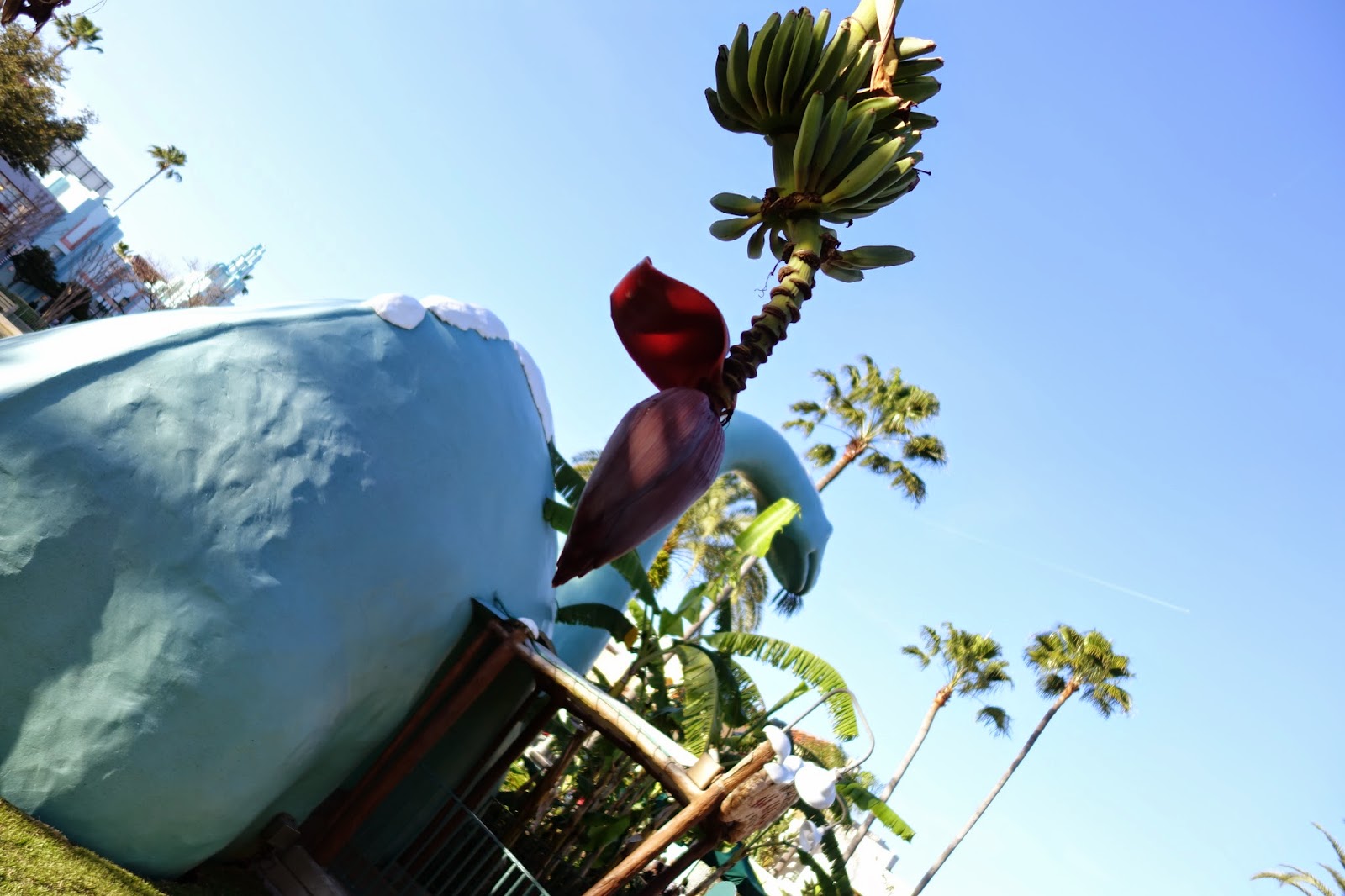 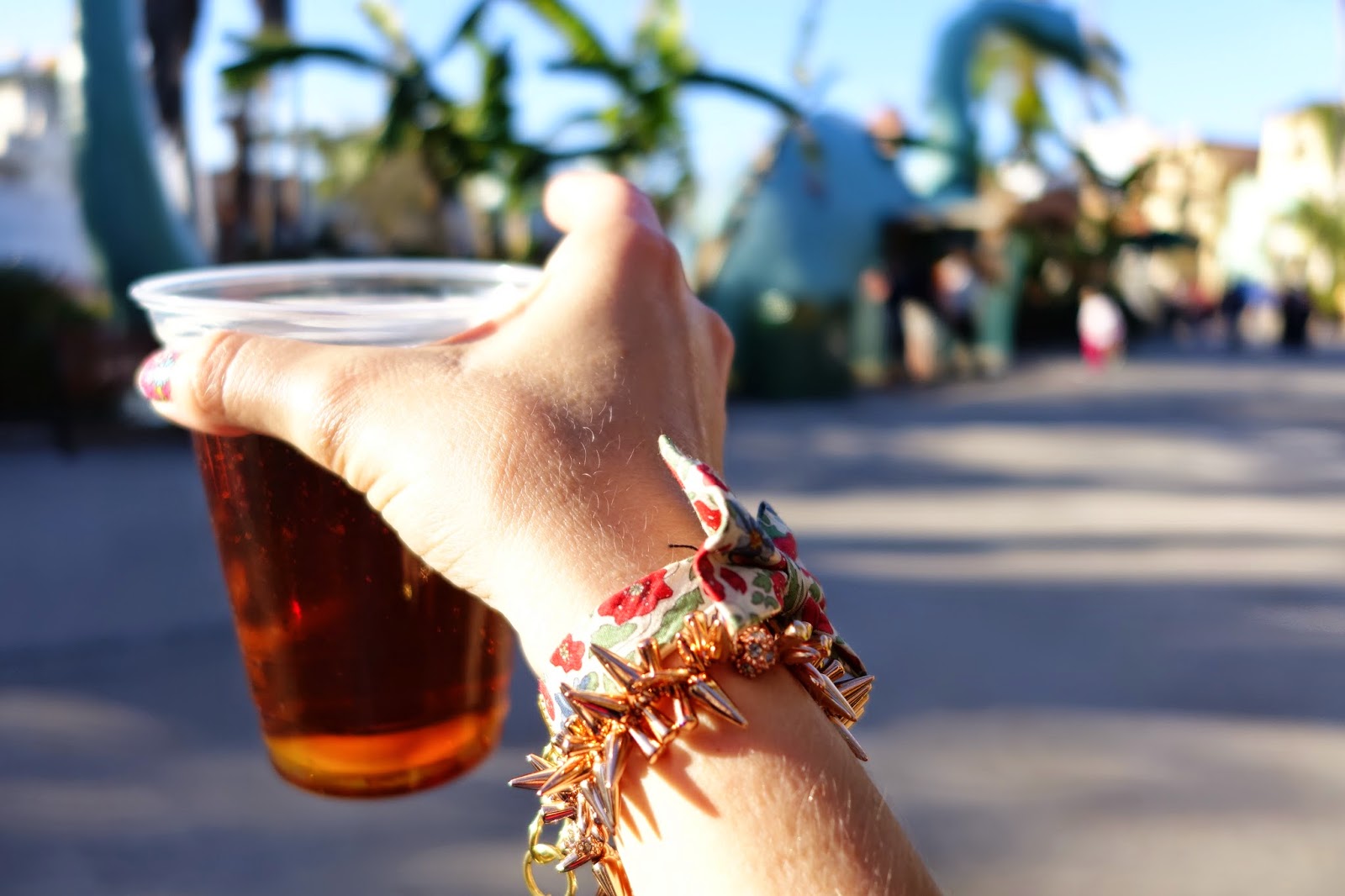 We strolled back into the Streets of America, by the Muppets, and through Pixar Place.

I'm bummed that this is the only picture of what I wore that day- we even took a few Photopass pictures, but I can't seem to track them down. This would be a great sweater for Valentines Day. 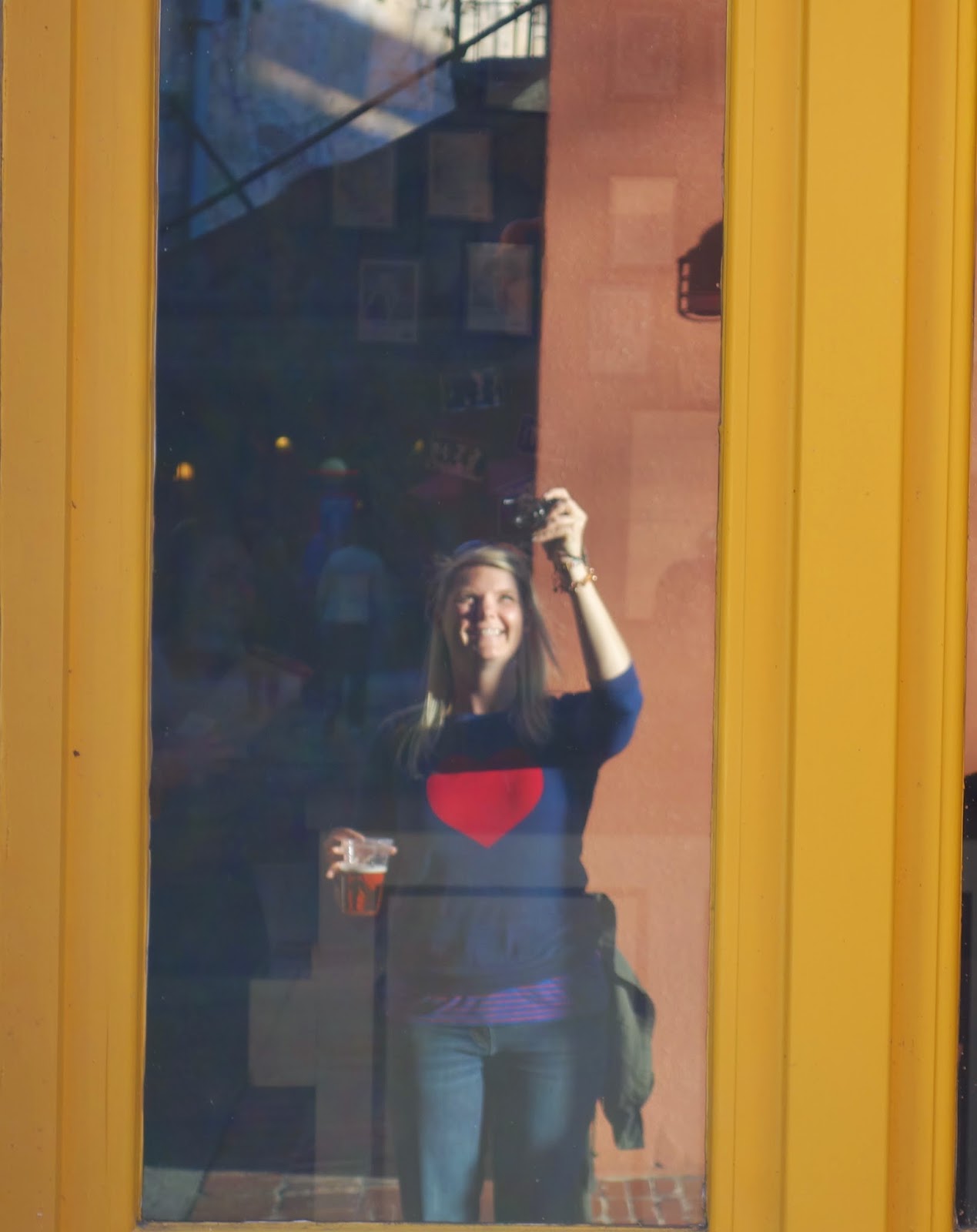 Next, it was time for One Man's Dream. Hey, House of the Future! 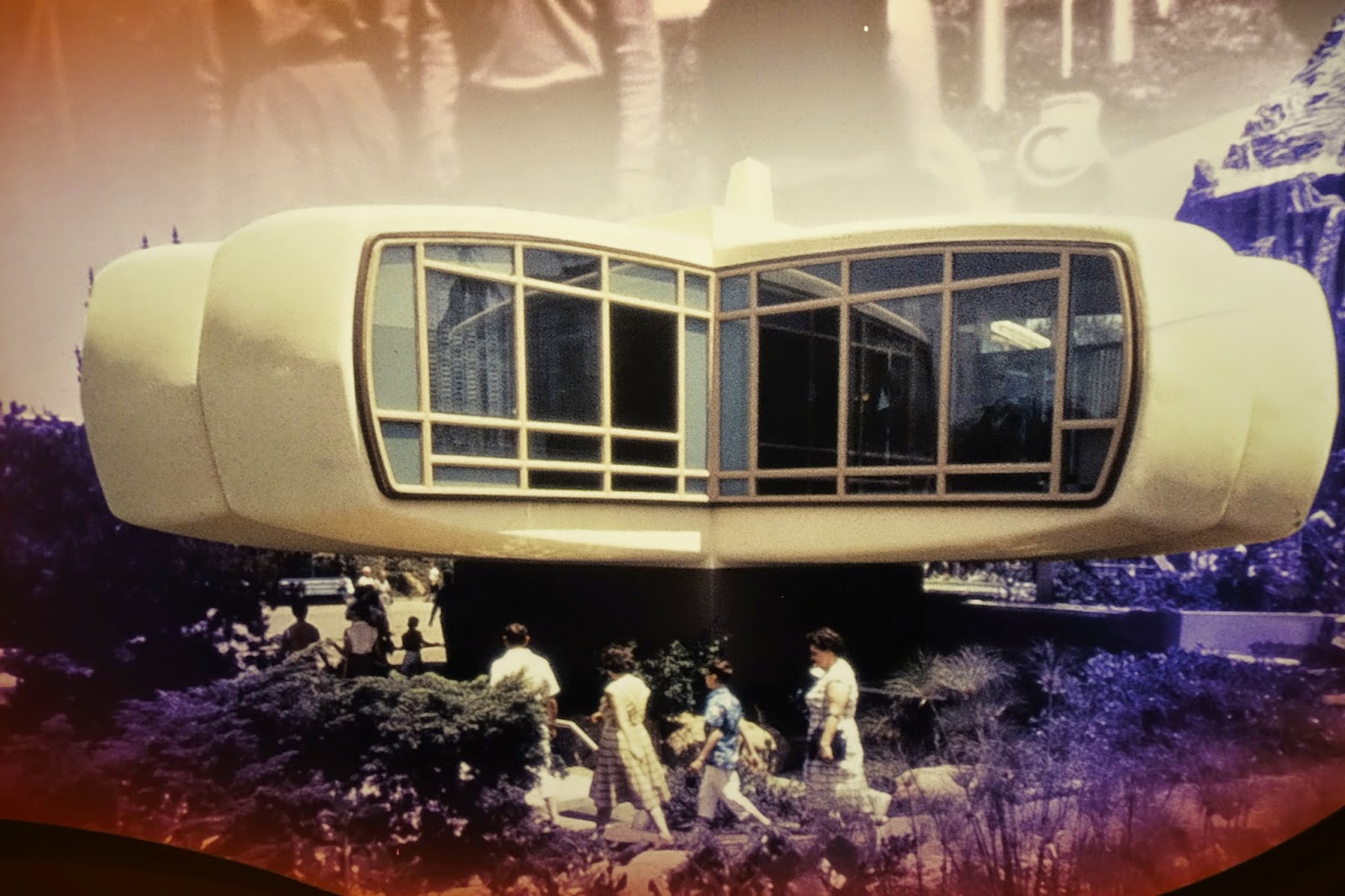 We did make a reservation for the Hollywood Brown Derby. We were both craving the famous Cobb salad. It was really quiet in the park that night; half the restaurant was unoccupied. 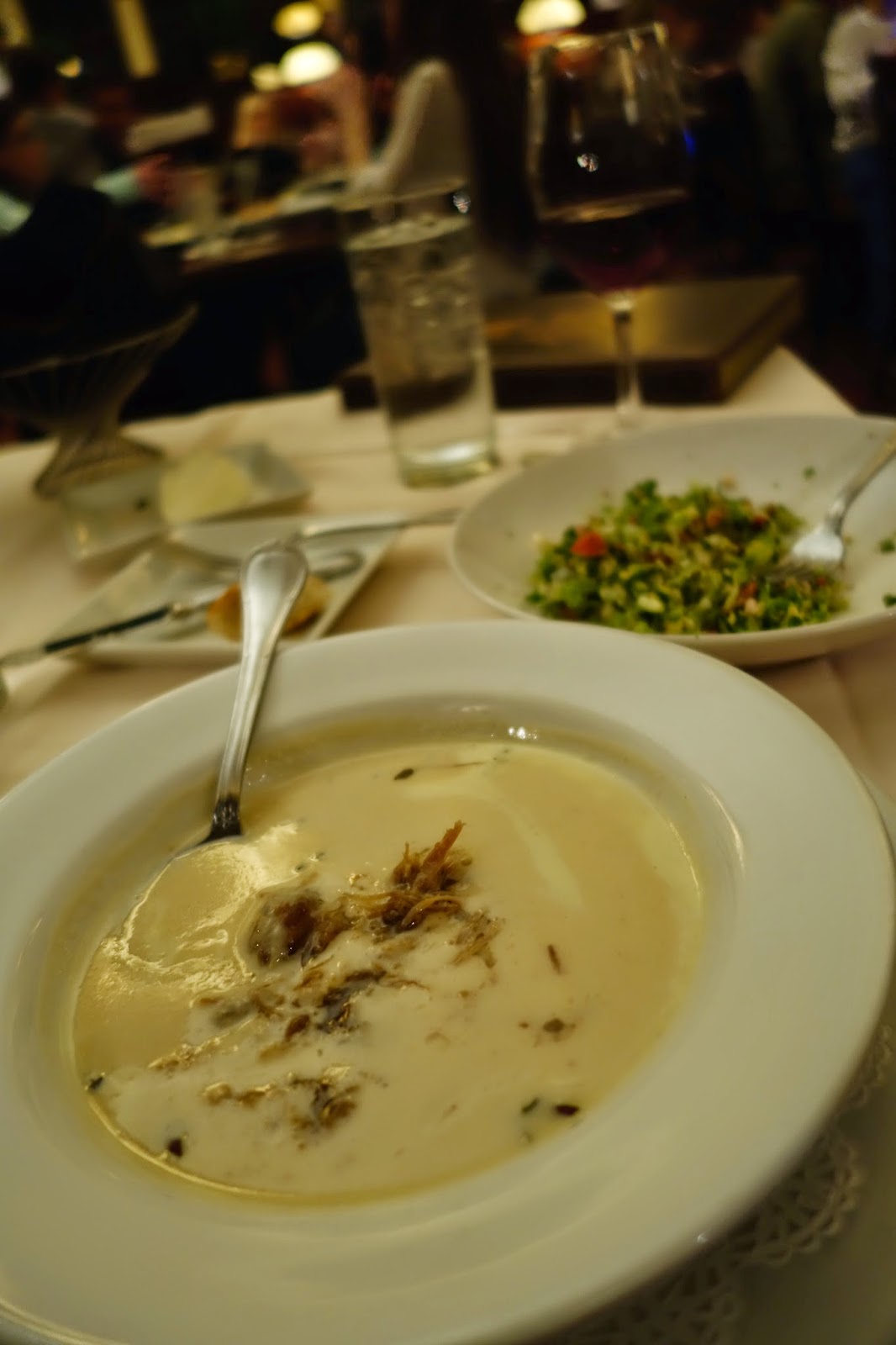 I had the Celery Root Bisque - with Duck Confit, White Truffle Crème Fraîche and a Thyme Crouton along with the Cobb Salad.

As always, the salad didn't disappoint. It does have a strong bleu cheese flavor, but not overpowering. The soup was killer- creamy, savory, and the smoked duck was a nice counterpart to the richness of the dish. 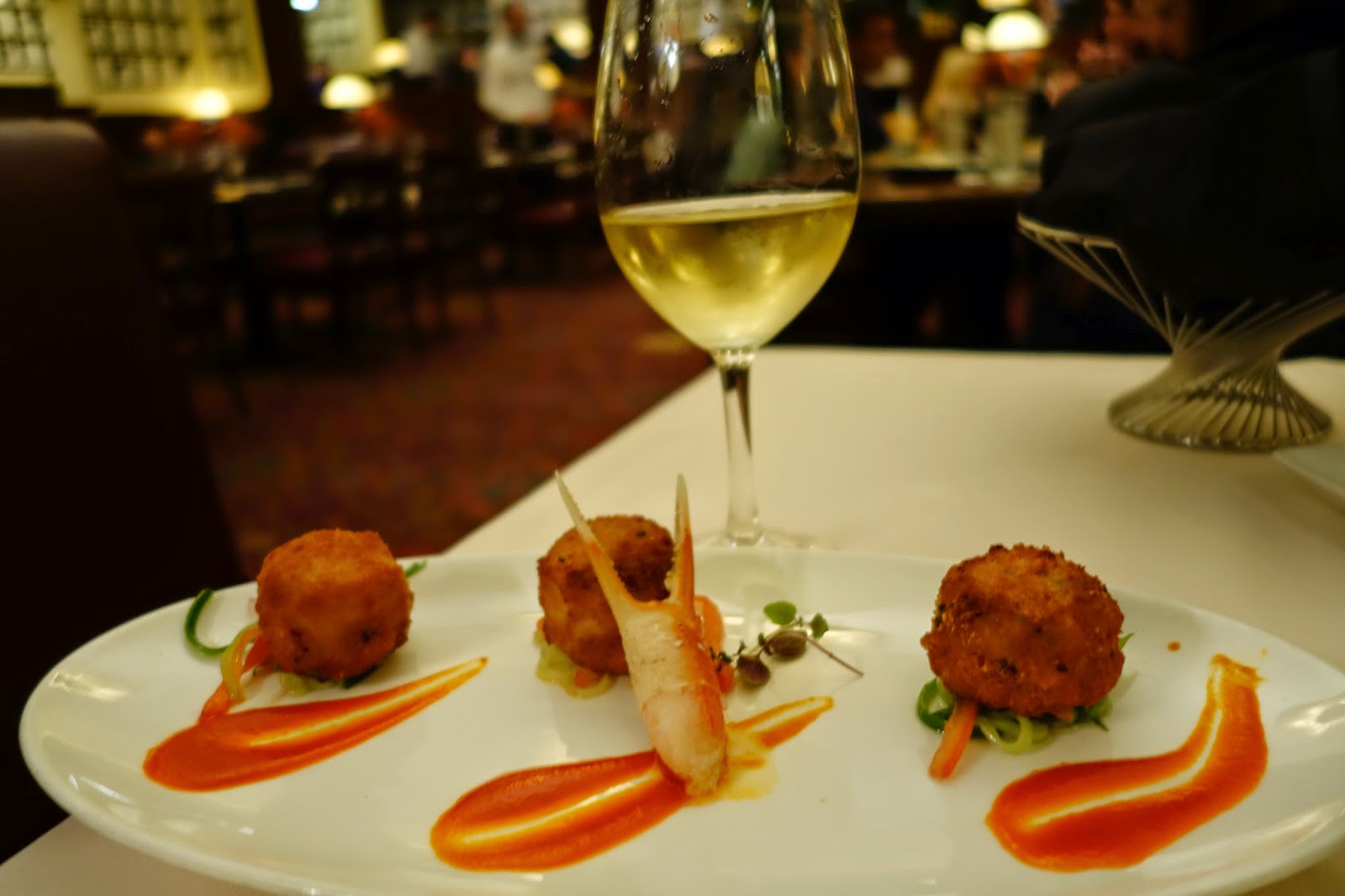 Mom also had the Cobb Salad, along with the Blue Jumbo Lump Crab Spring Rolls - Snow crab claw and an asian slaw with spicy Miso Aioli. She really liked them, while I felt they were a tad fishy. We both had a glass of Kim Crawford Sauvignon Blanc, our favorite. 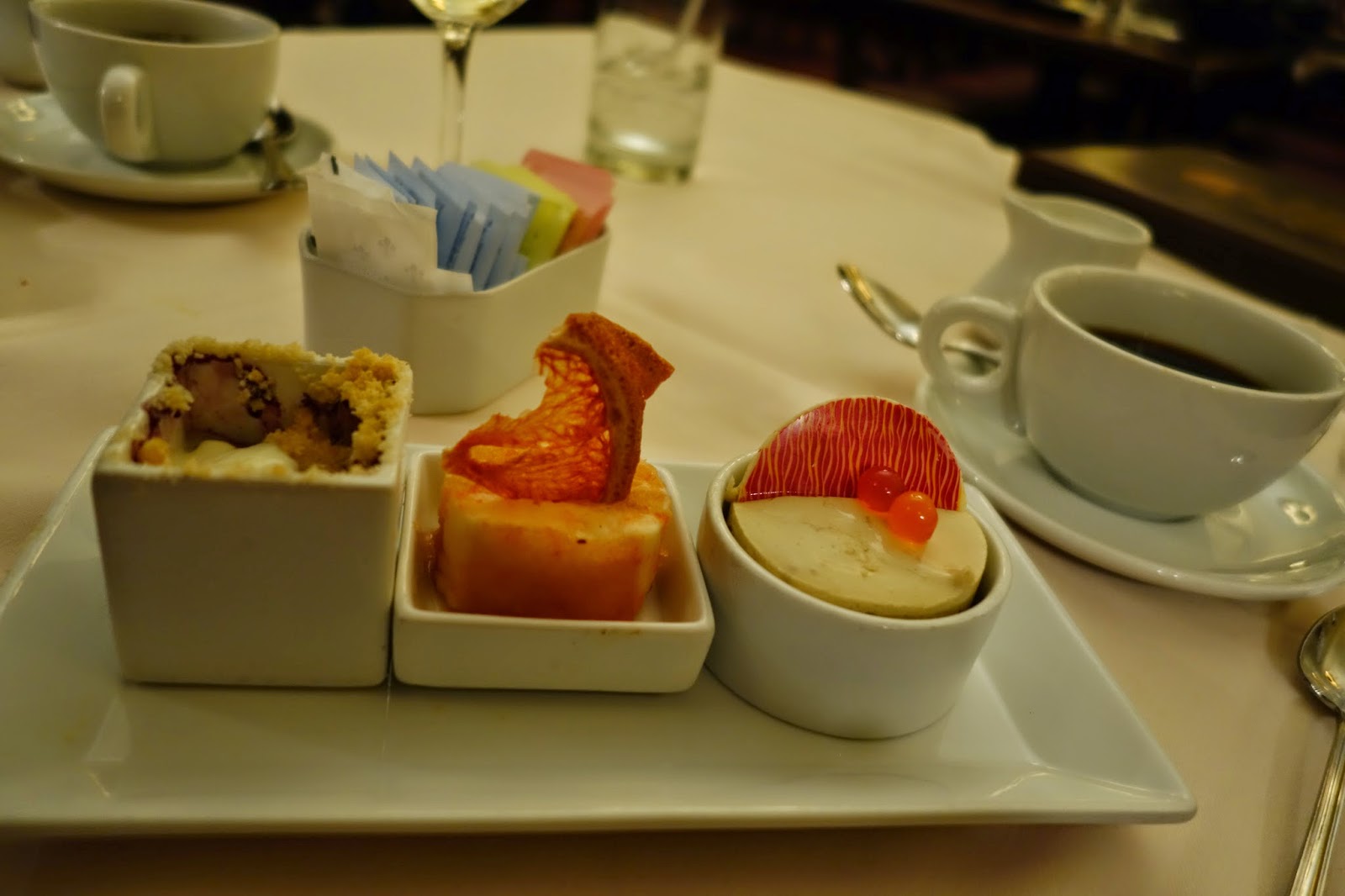 We each ordered a dessert trio- Mom got two of the Double Vanilla Bean Creme Brûlées
- Served with a dark chocolate dipped biscotti and one Warm Seasonal Fruit Cobbler - With creme Fraiche and orange blossom honey. My trio (above) consisted of the Cobbler, A Brown Derby Original! Grapefruit Cake - Light layers of yellow cake with fresh grapefruit cream cheese icing, and
Banana White Chocolate Toffee Tower - Served on a cocoa almond cookie and Bananas "Foster."

The creme brûlée was too runny, and didn't have that satisfying crunchy top. The fruit cobbler, which was blueberry at the moment, was yummy, if not a tad too sugary. The banana dessert lacked any flavor really. BUT, I really liked the grapefruit cake.

On Saturday, we headed to Animal Kingdom for Bloody Mary's. Luckily they were still serving them at the Dawa Bar when we arrived around 12 noon. They always have the mix, but run out of the accompaniments as the day goes on, and from what I understand, when those are gone, they stop serving Bloodys for the day.

Mom snagged a table while I went to fetch some popcorn, a Mickey pretzel and a fruit and cheese plate. Brunch at Dawa Bar! 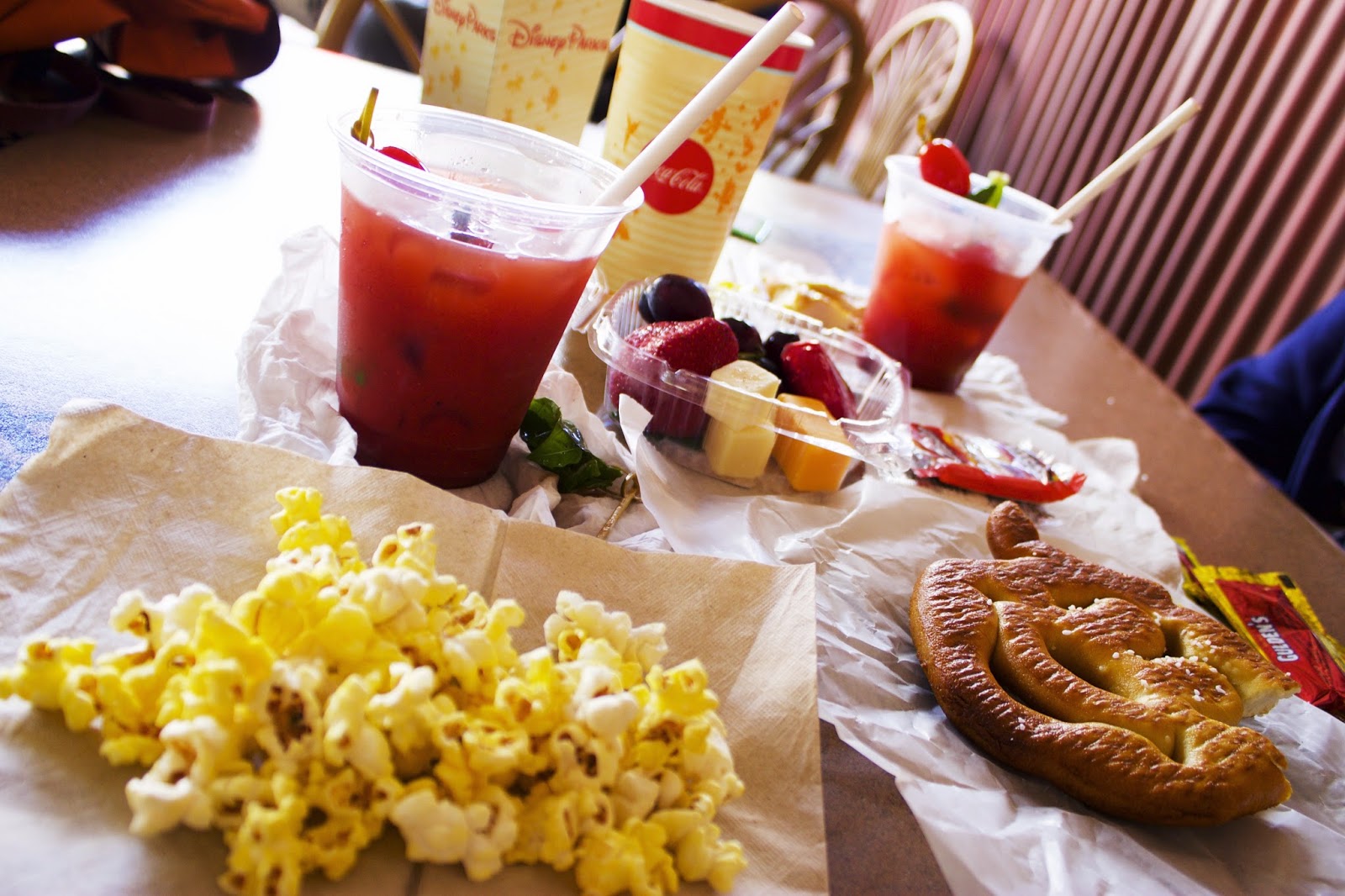 Confession: sometimes I wear an outfit two days in a row. Hey, they didn't invent Febreeze for nothin'! Scroll down to Sunday to see details, but I'll tell you know that this is the best t-shirt I've ever found, at a great price. 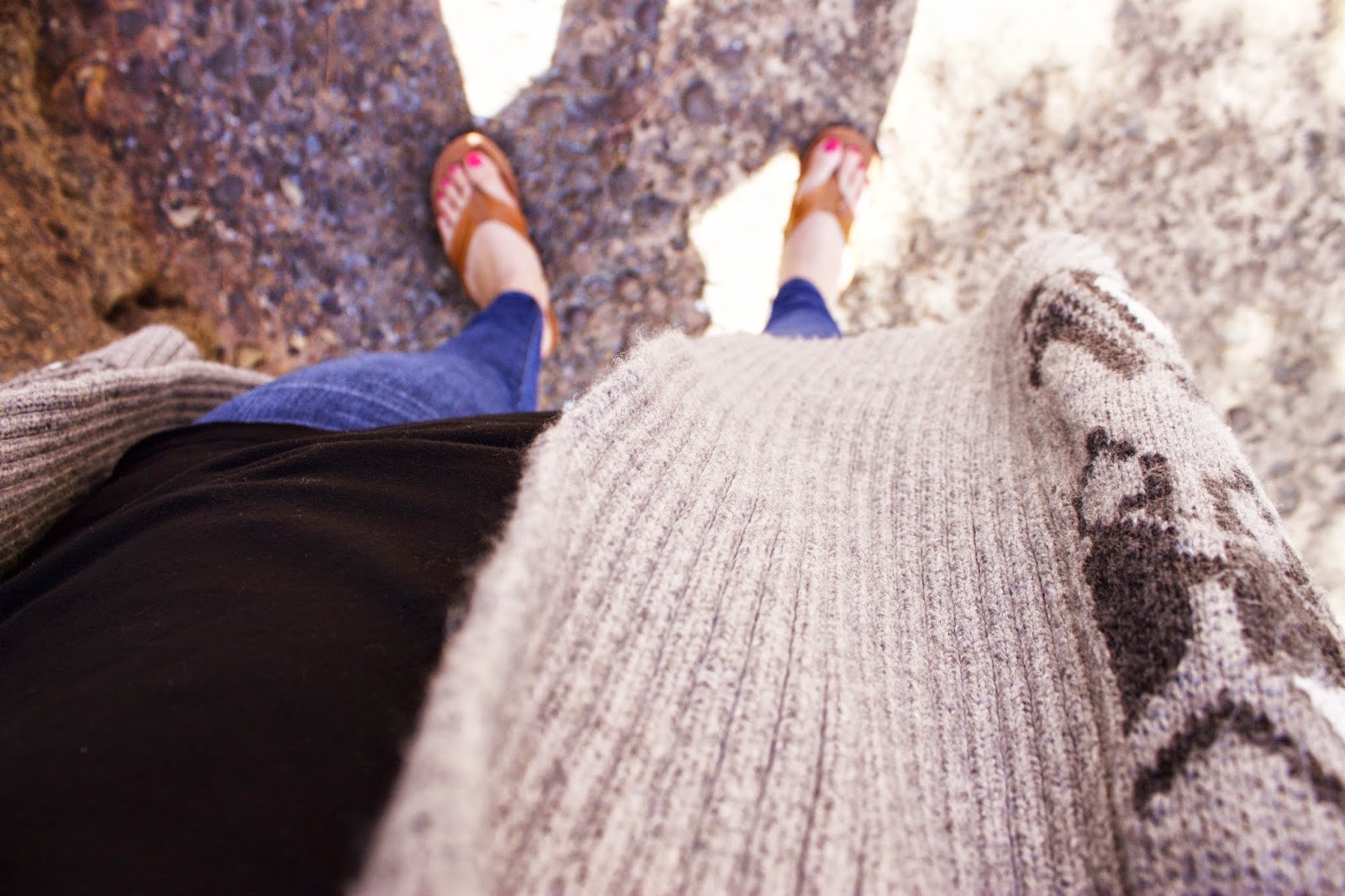 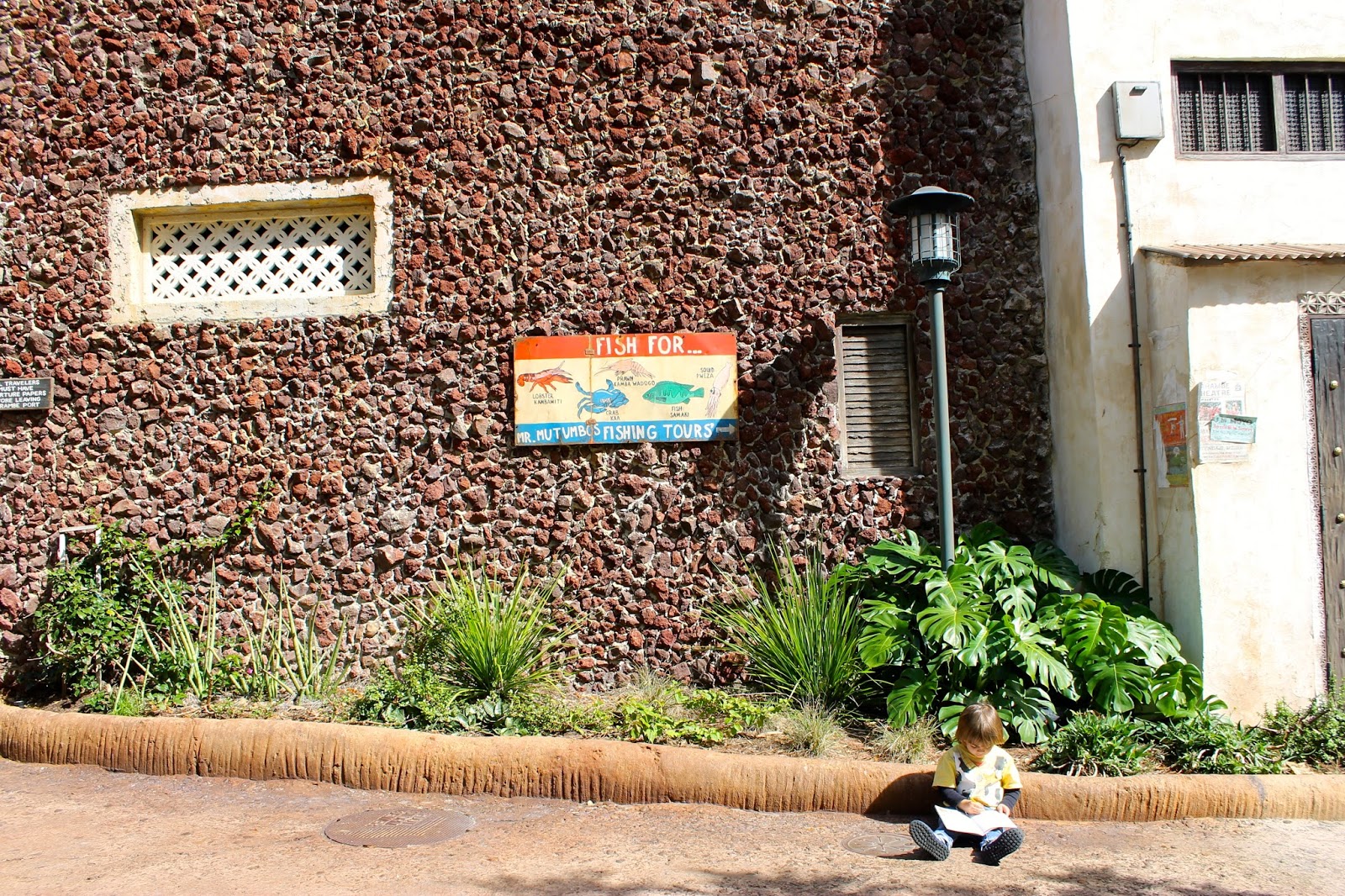 After two Bloody's each, we watched the Festival of the Lion King. 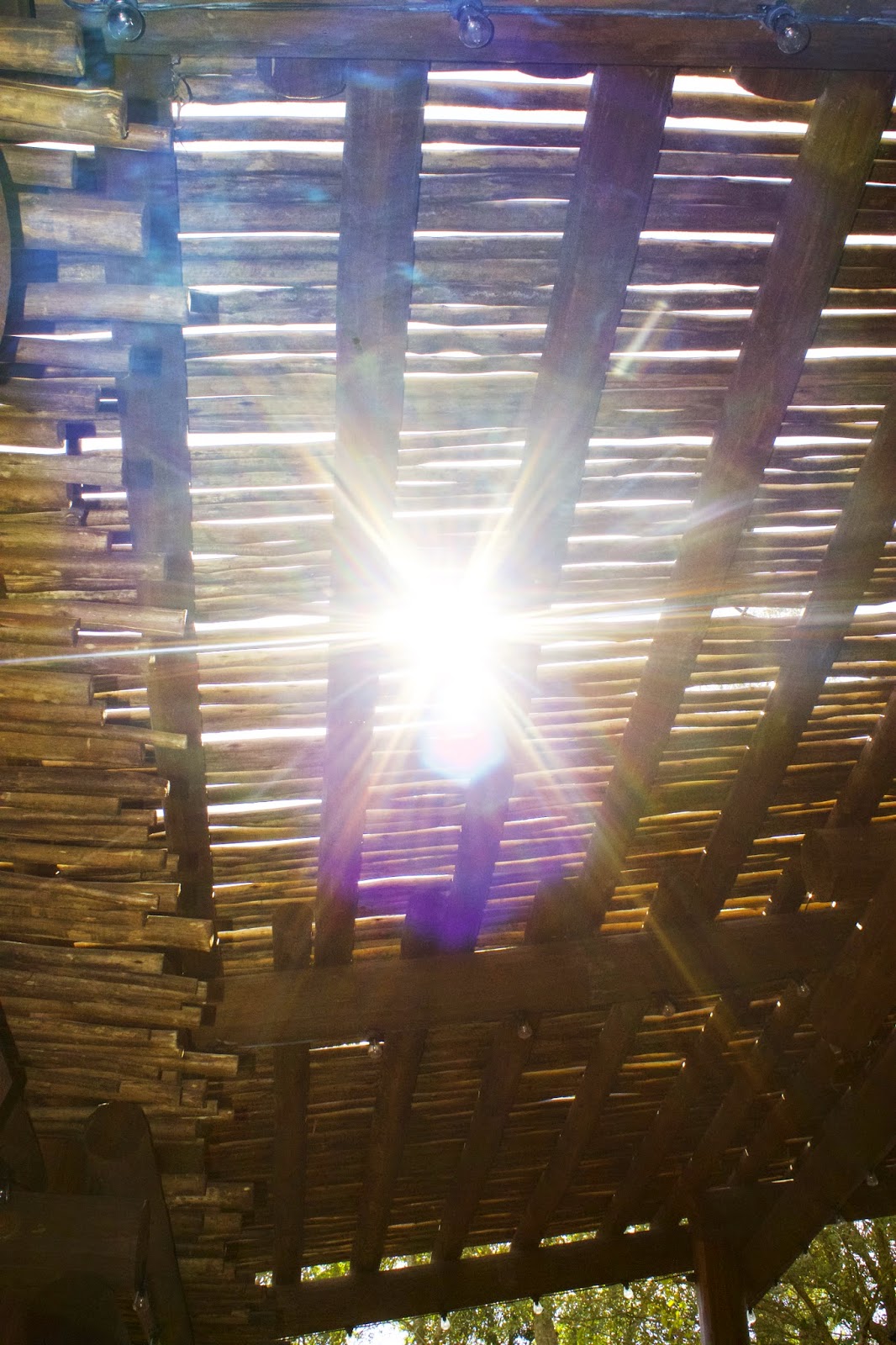 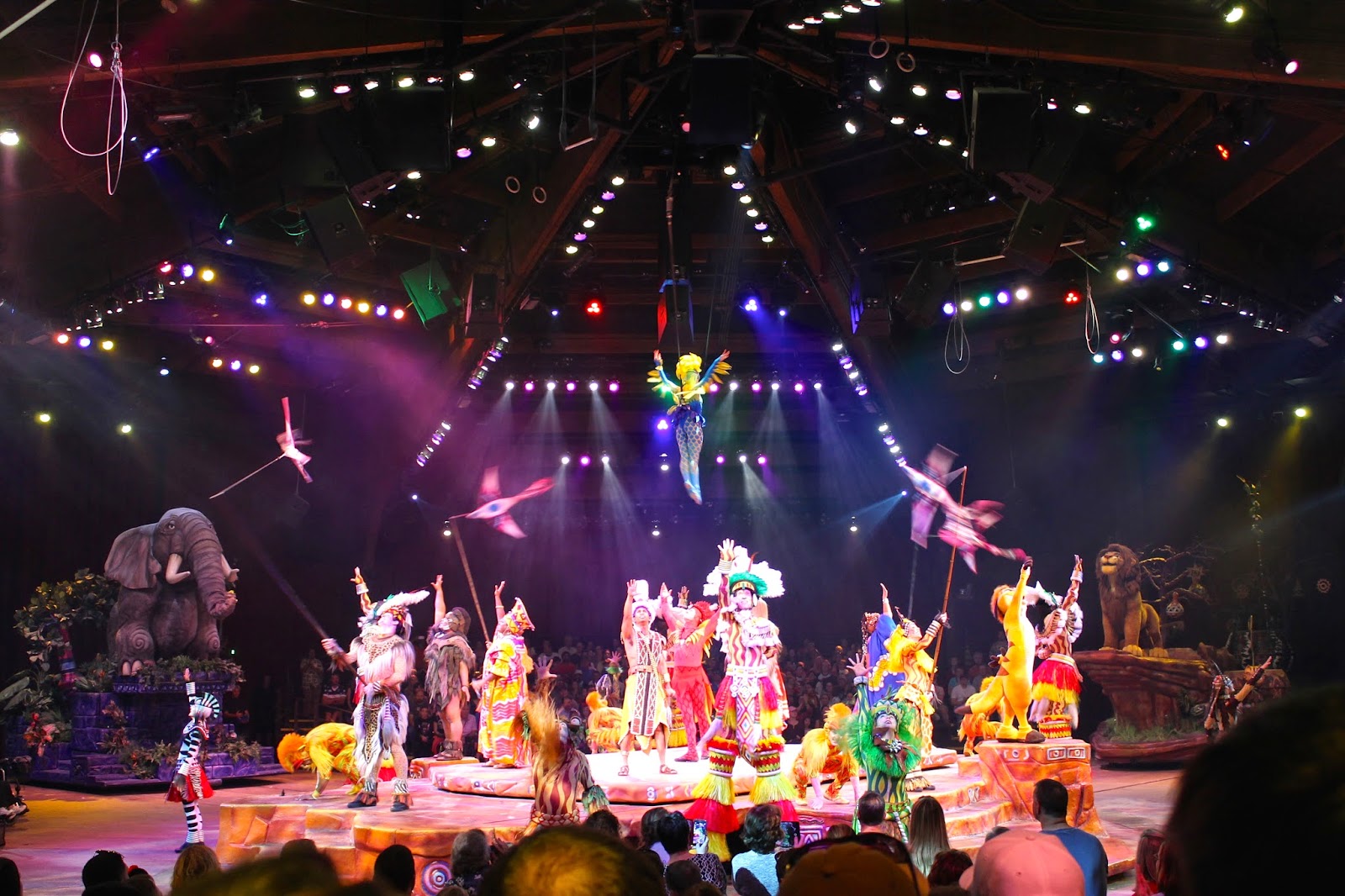 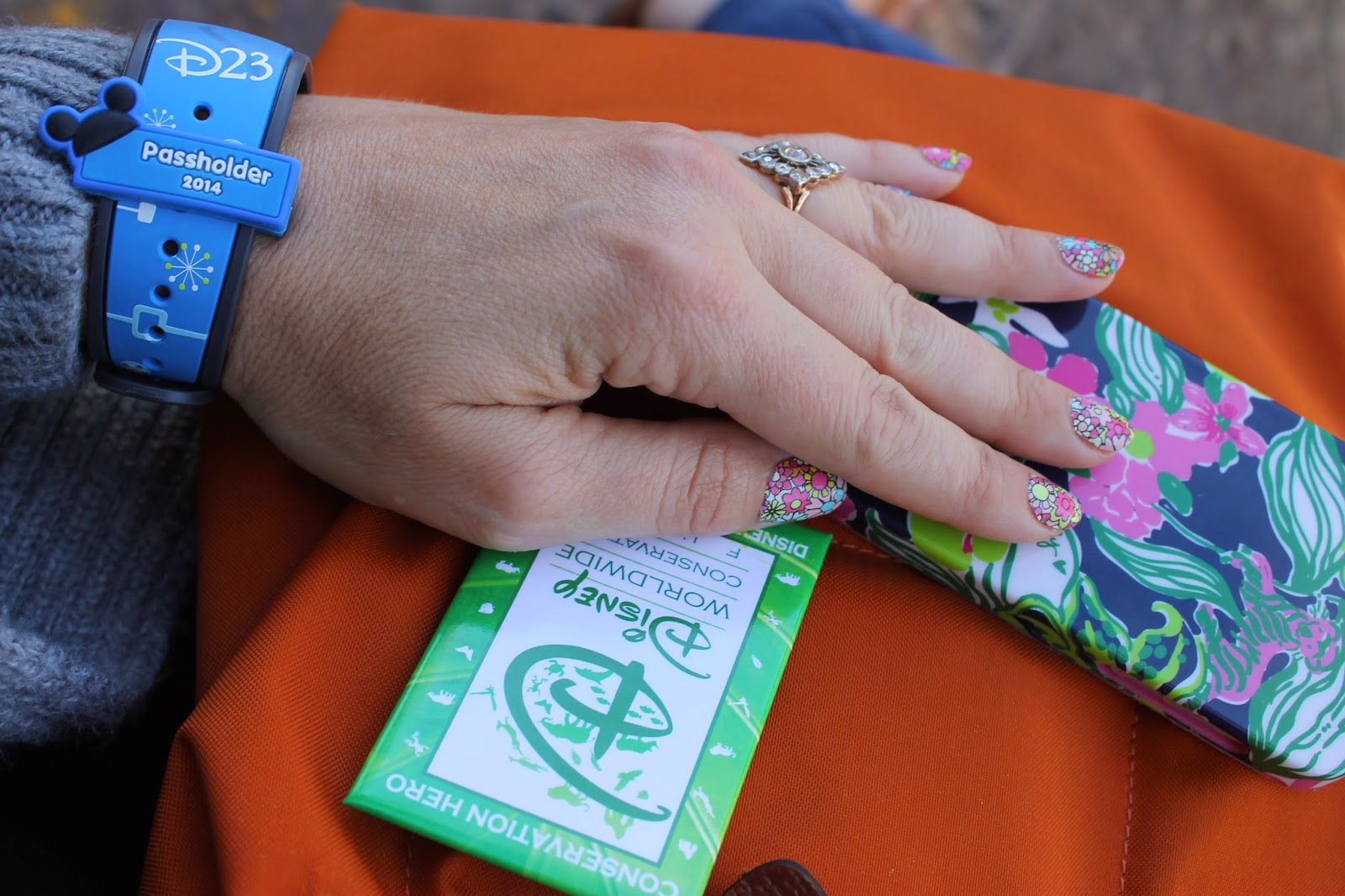 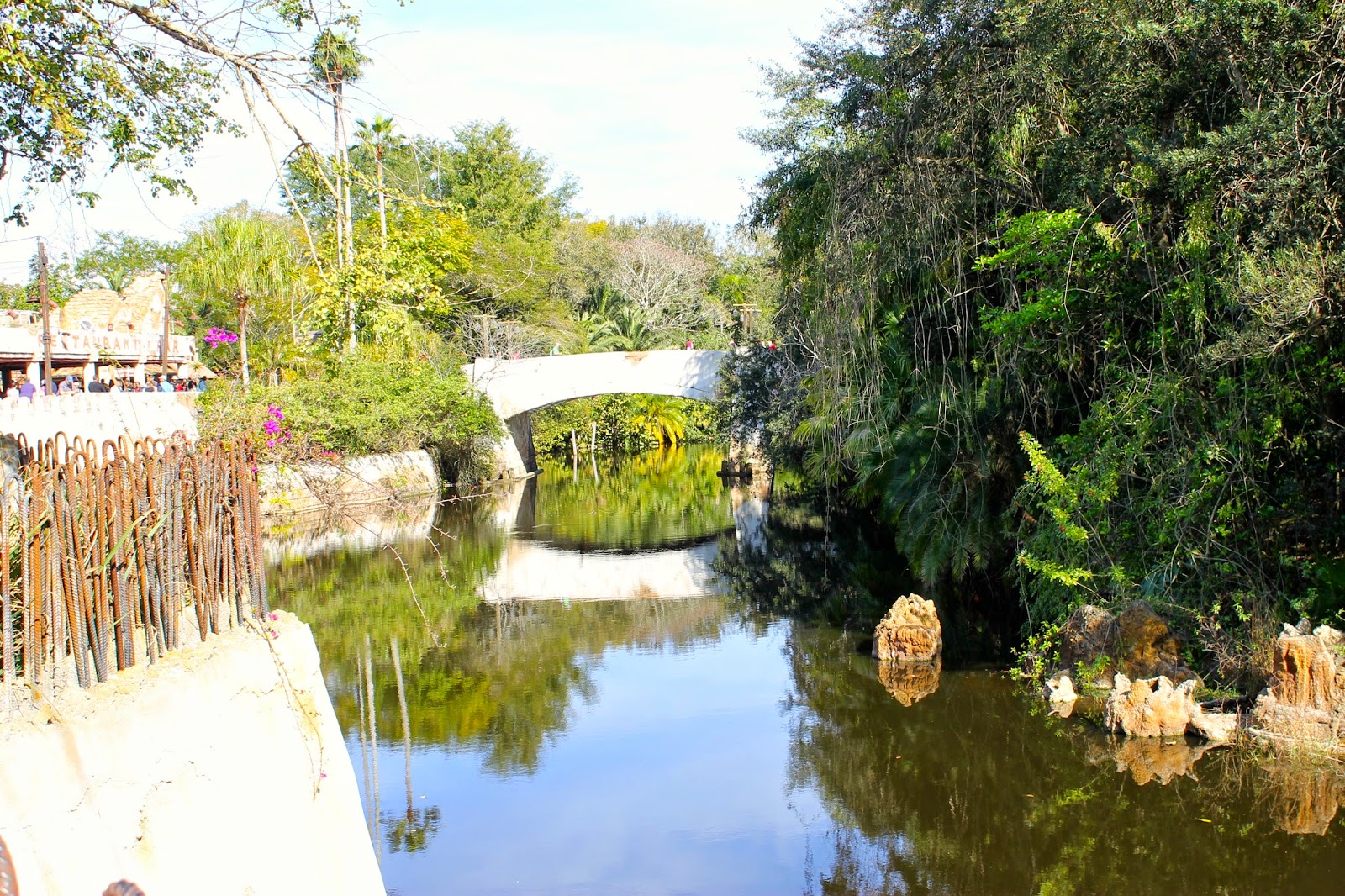 Next up, Yak & Yeti. We LOVE the lettuce wraps. Apparently they updated the menu at the first of the year. 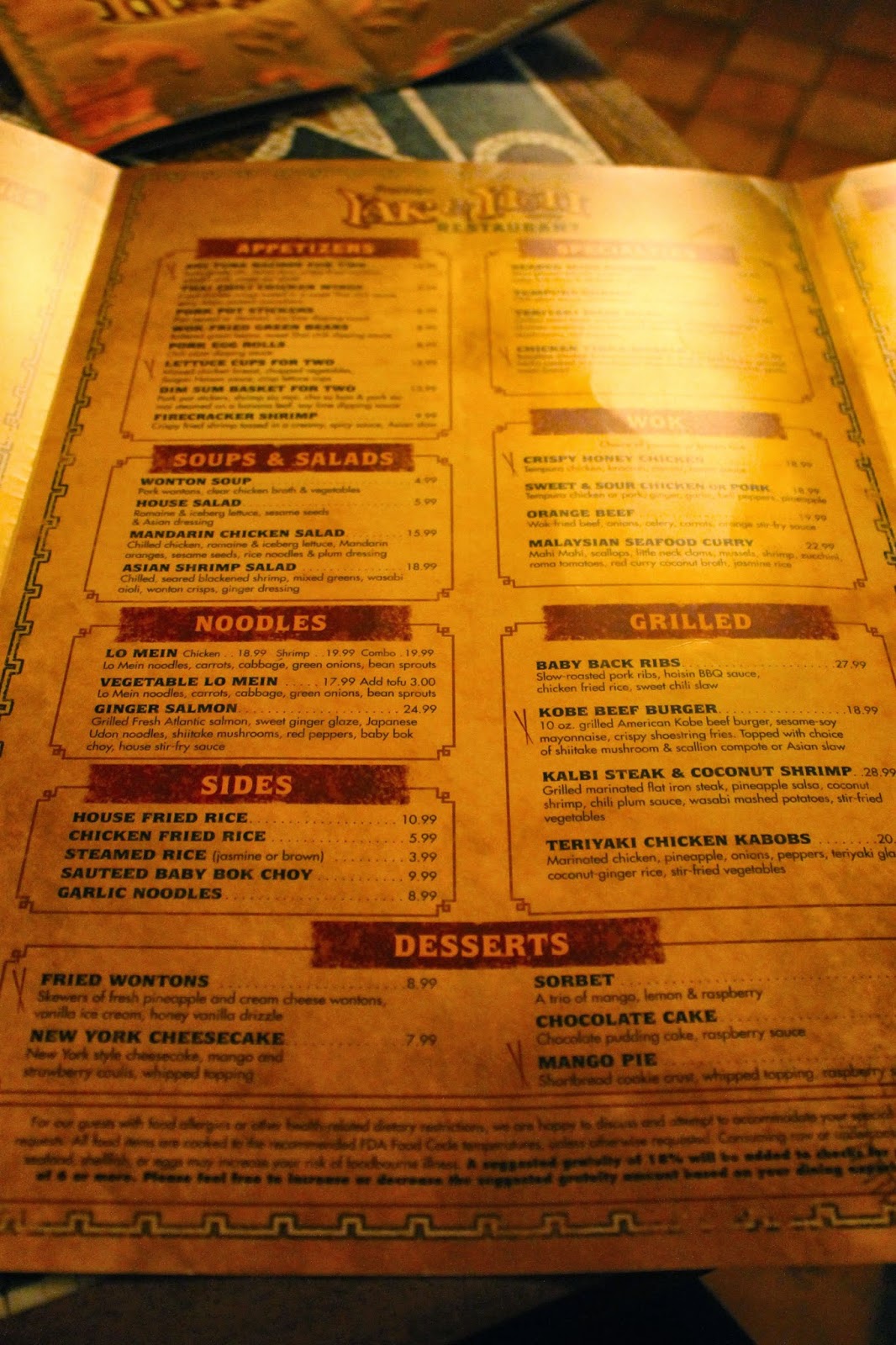 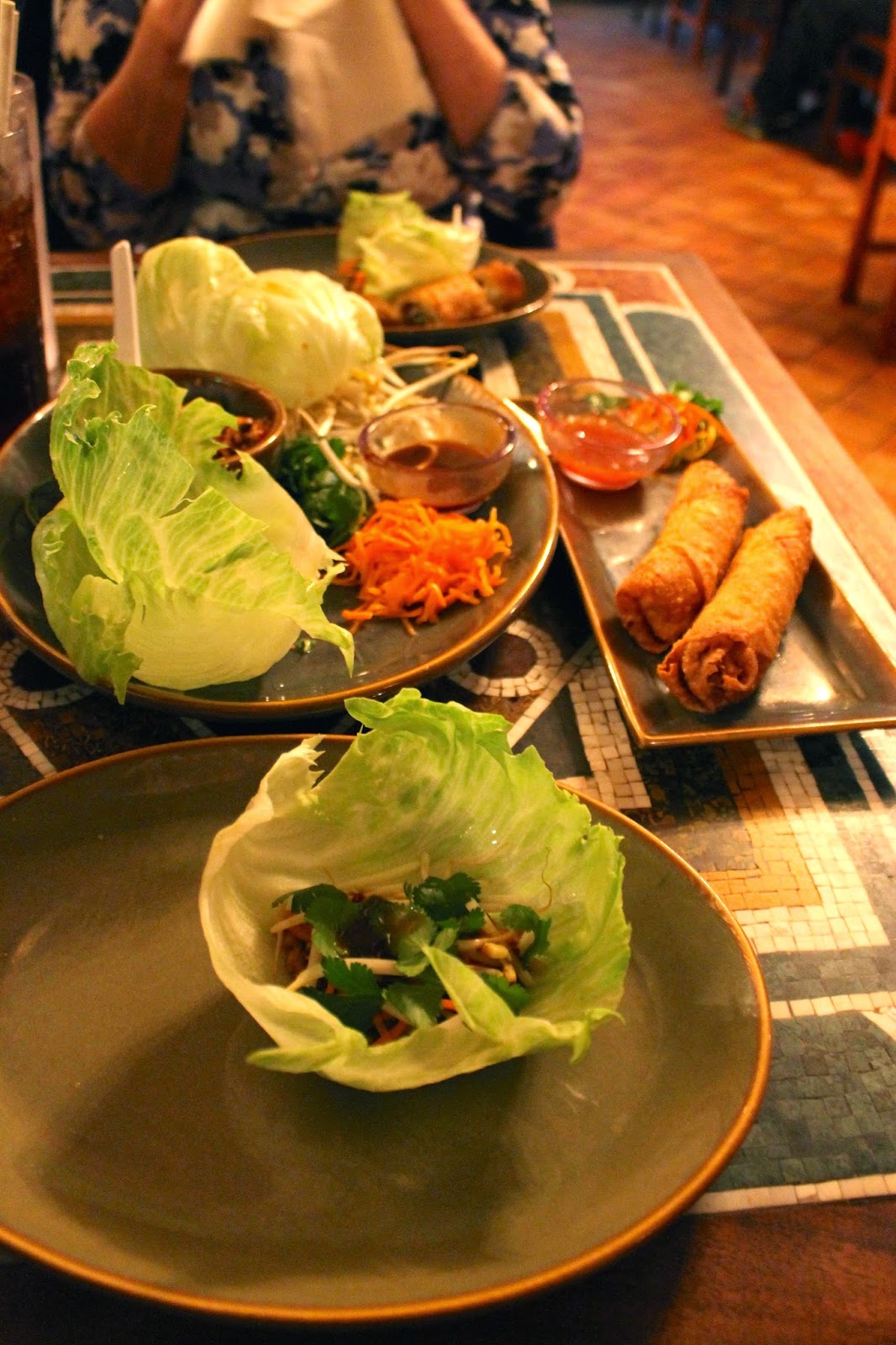 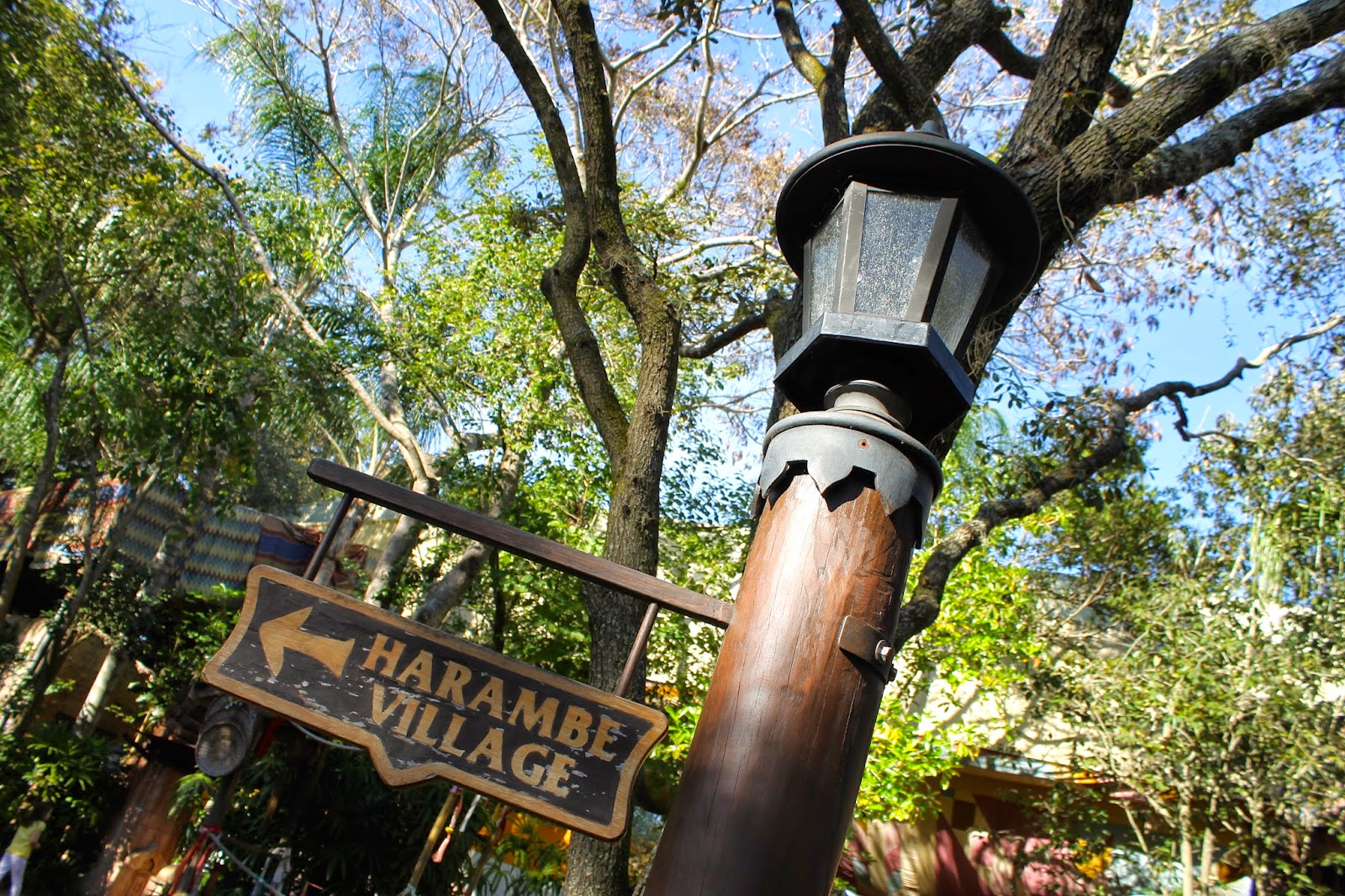 This is one of my favorite spots in all of the park- this little 'hidden' walkway between Africa and Asia. It's really not hidden at all; it runs parallel to the main walkway, but it's tucked up in the trees and for some reason, NOBODY ever walks down it. We had it to ourselves as you can see. There's also a little covered pavilion with several tables and chairs, so it's a nice place to carry your food and eat. 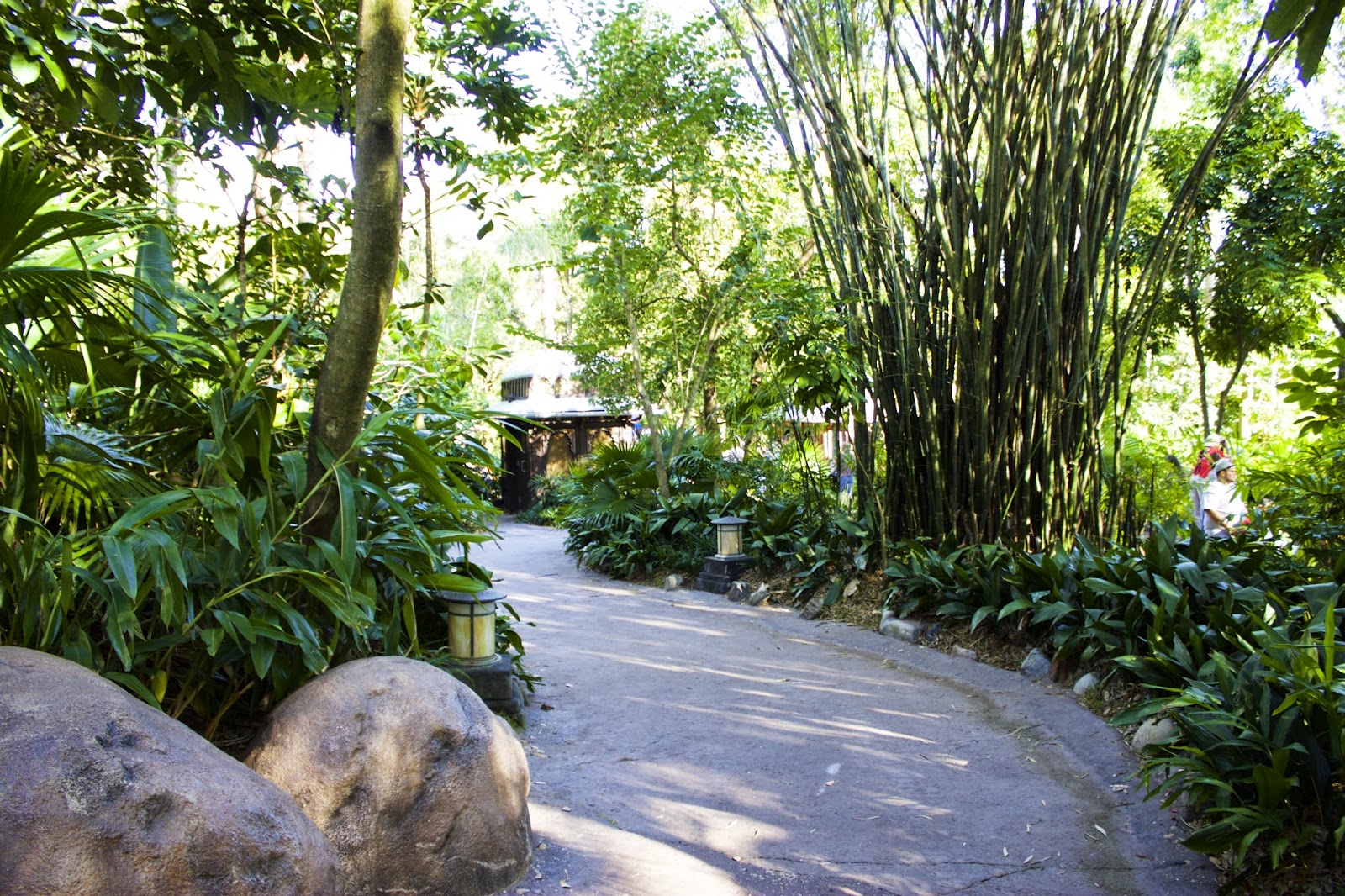 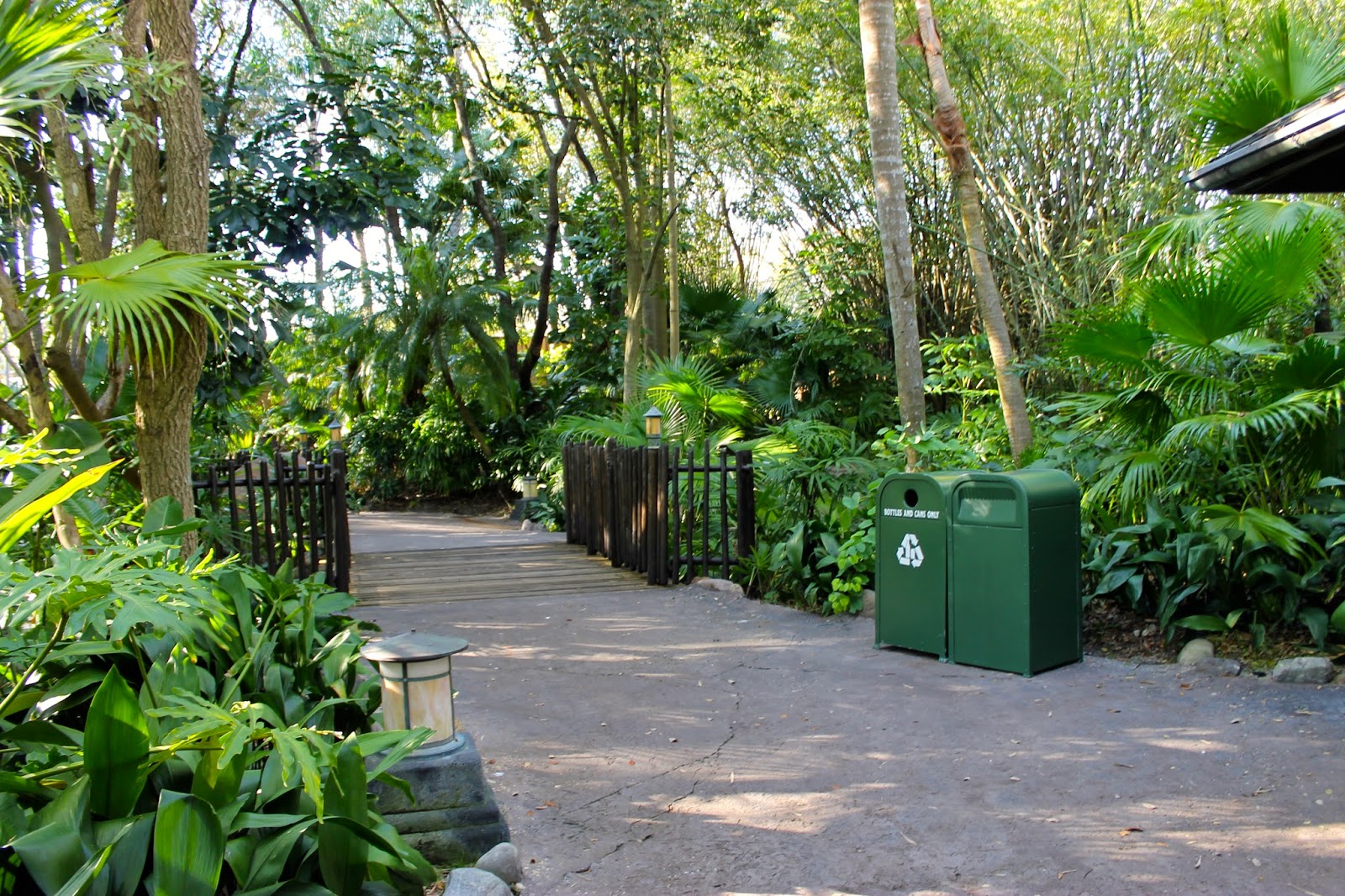 On Sunday, Mom, John and I went to Downtown Disney for dinner.

Here's the outfit from Saturday, on repeat. This shirt, guys. This. Shirt. It's from Target. It's a drapey, substantial yet soft material. It's long enough that it covers my bum. And it's $12.99. It comes in grey, coral, white and black; scoop neck or v-neck. I got both neck styles in black. Not gonna lie, I probably have at least six black tees. They're so versatile, but this one's the best so far.

Run, don't walk to Target and stock up. 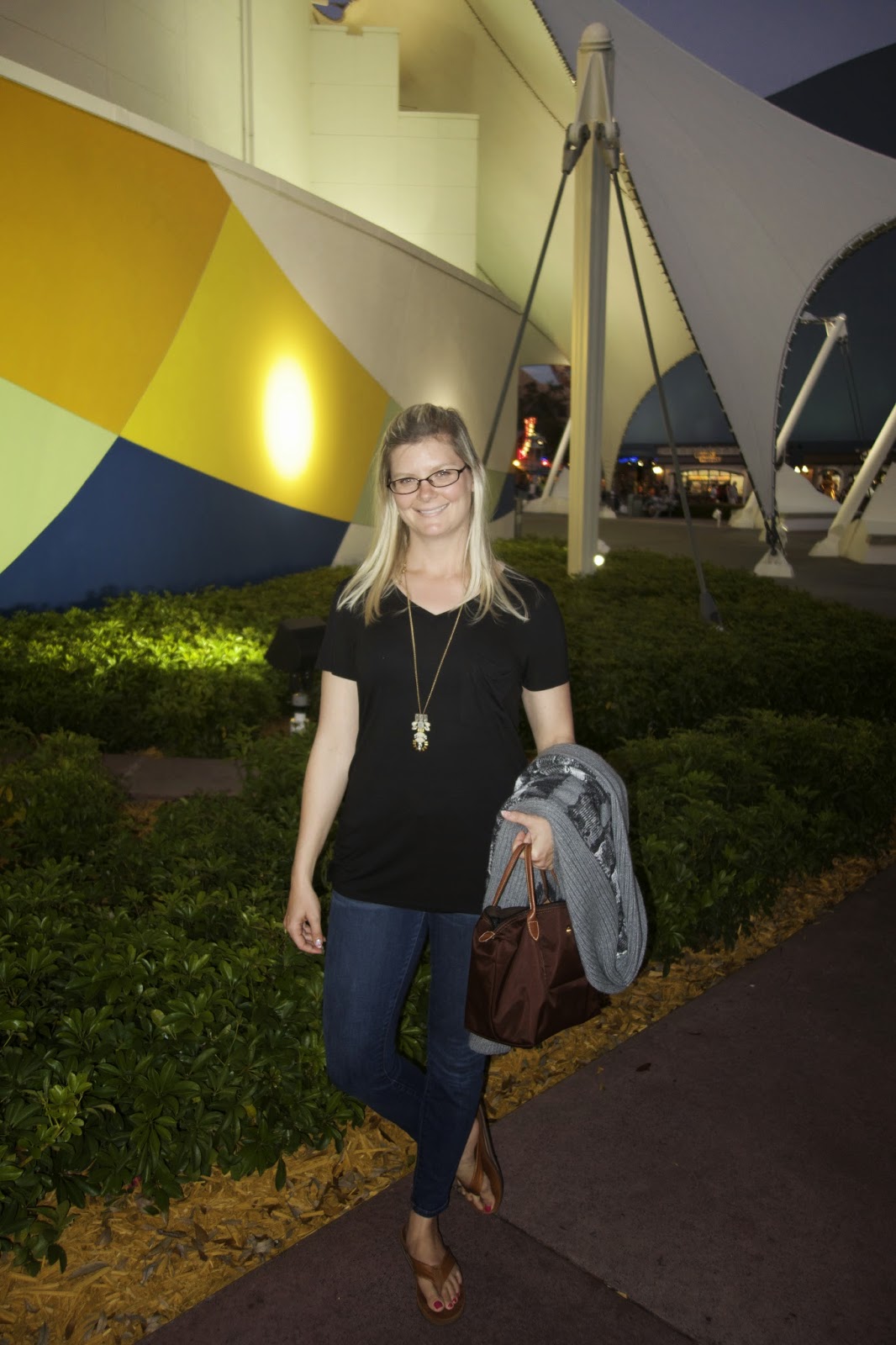 Mom was craving a Pina CoLAVA, which is a standard drink at most Disney resort pool bars and lounges. We searched high and low at Downtown Disney and couldn't find one, but were told that the pina coladas at Bongos were delicious, so we stopped there. 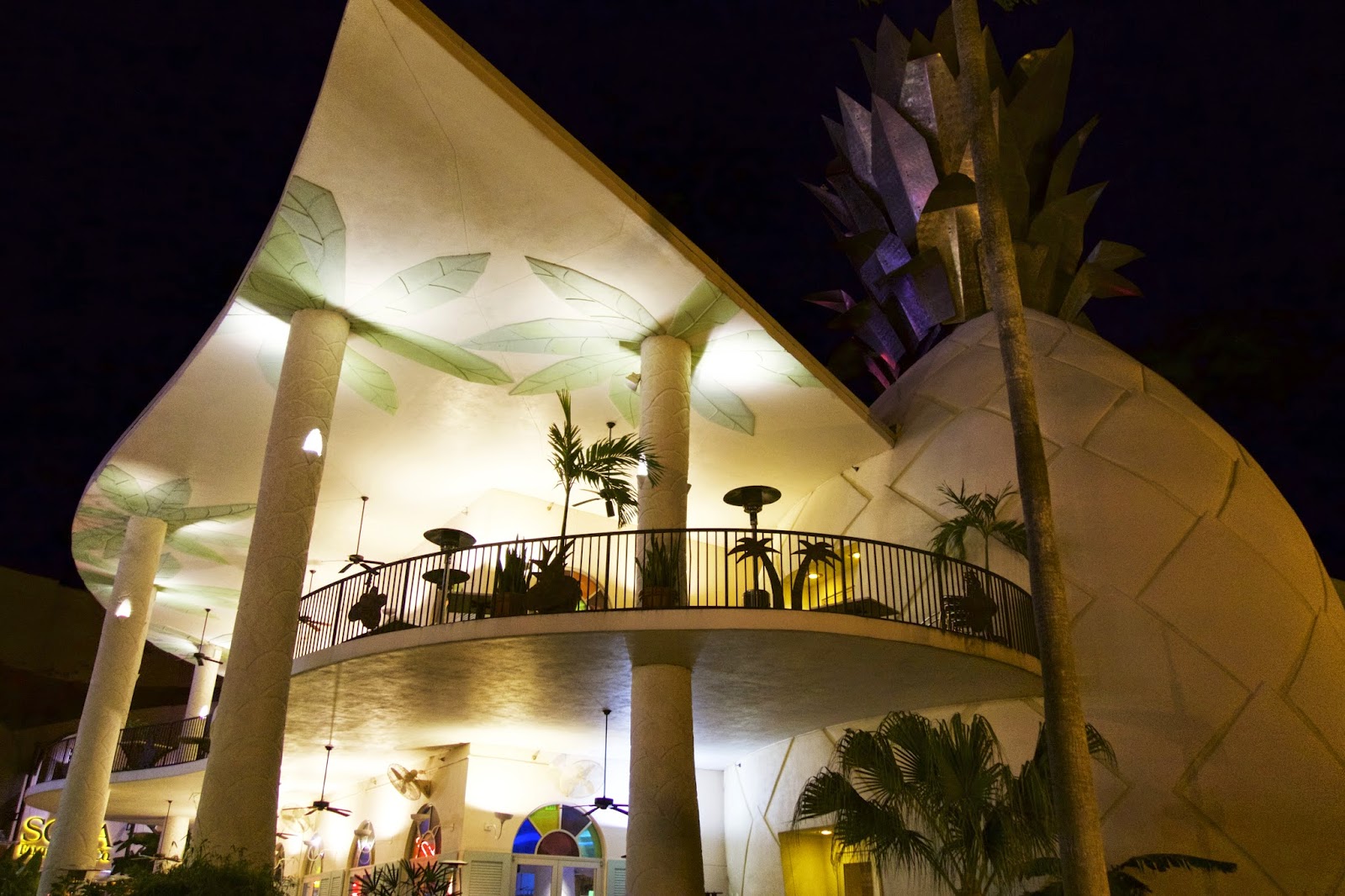 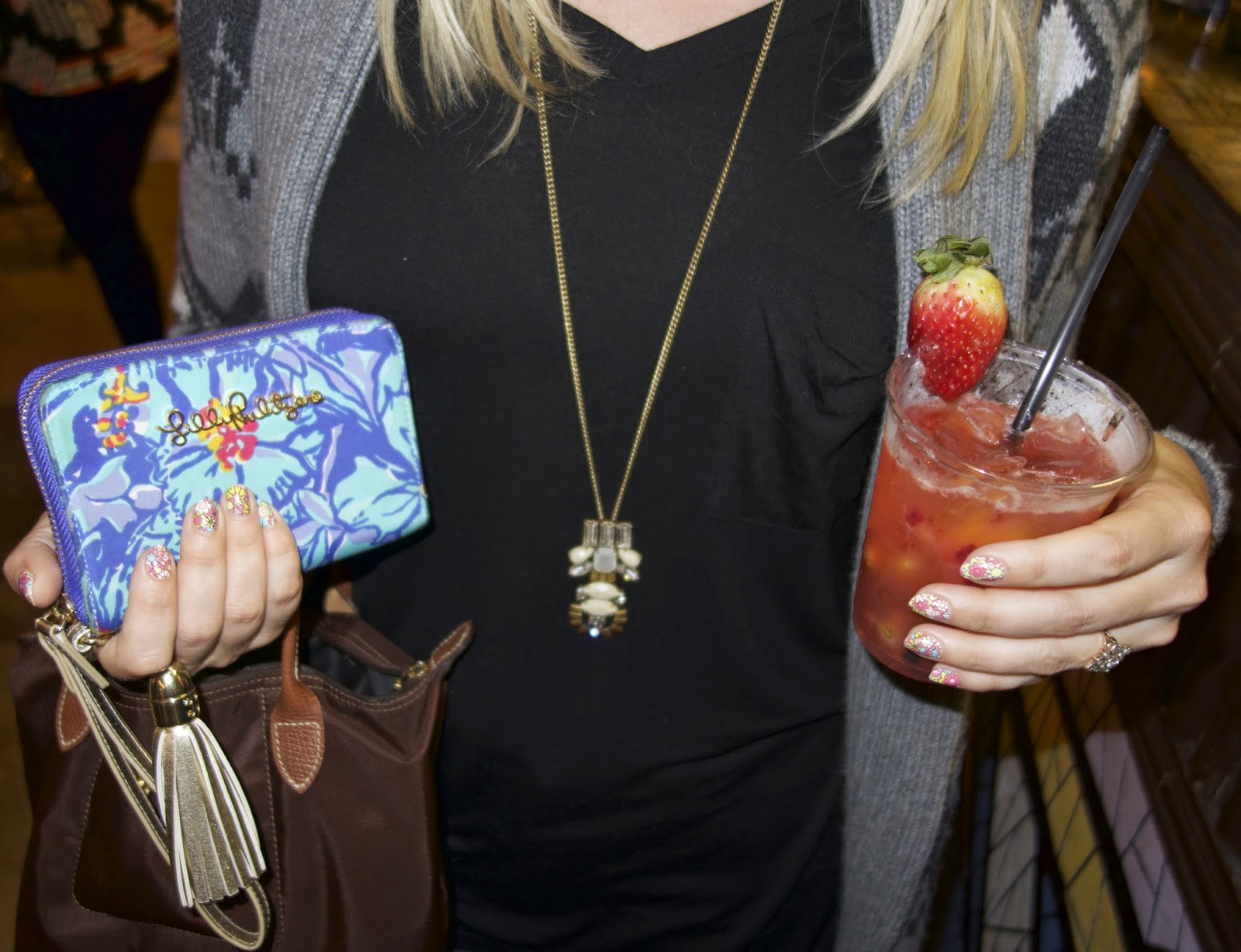 Our final destination was Fulton's Crab House. We called ahead to see if they had stone crab in season, and hallelujah they did, so that solidified our dinner plans.

We started with the Fulton's Seafood Tower- Alaskan king crab, shrimp cocktail, Ahi tuna lettuce cups, lump crab, and oysters on the half shell and Crab Ceviche- blue crab, avocado, peppers, onions, lime, salsa verde. It was all so fresh and tasty, not fishy at all. The oysters are of Apalachicola  variety, for all you oyster connoisseurs. 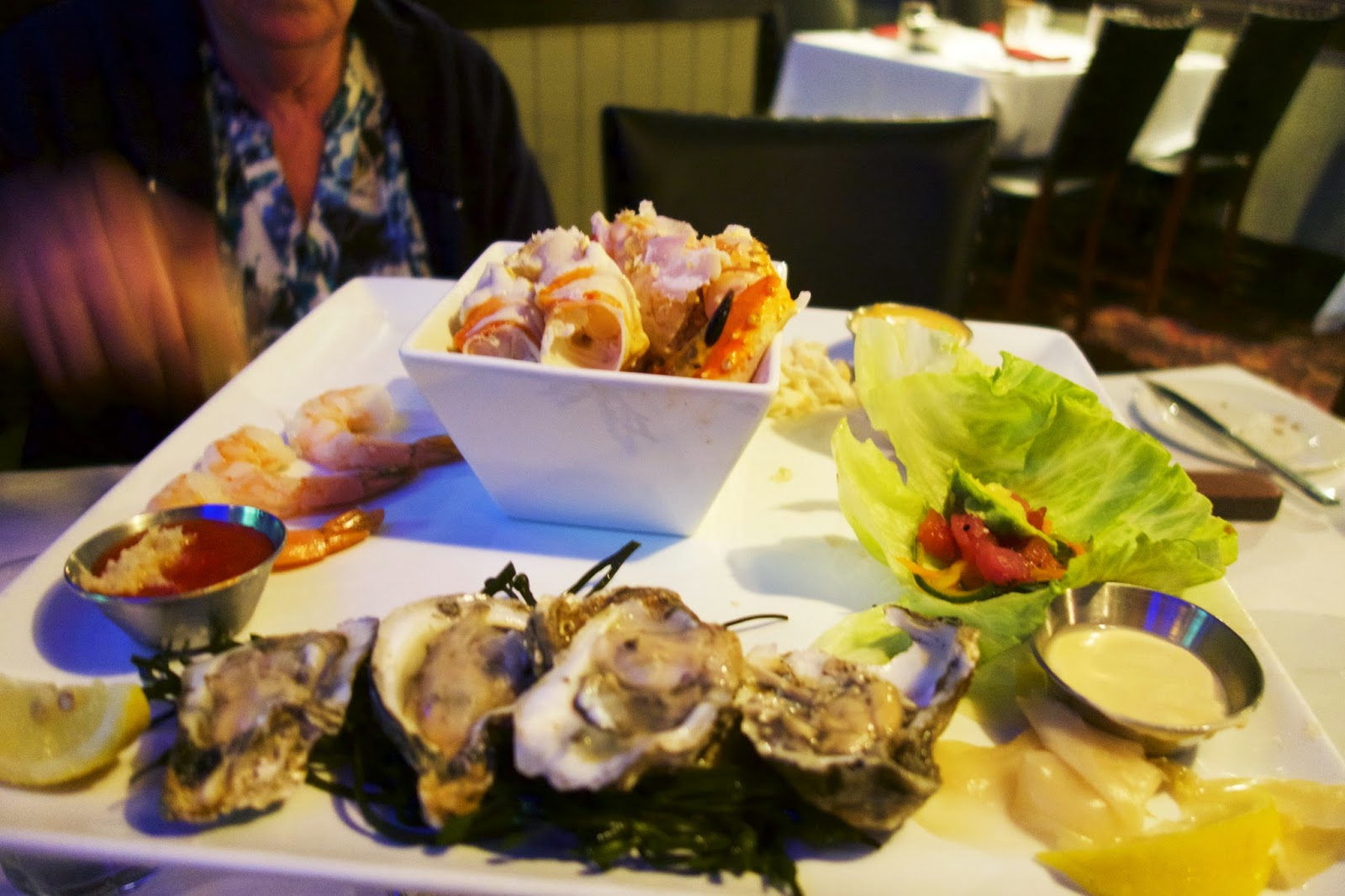 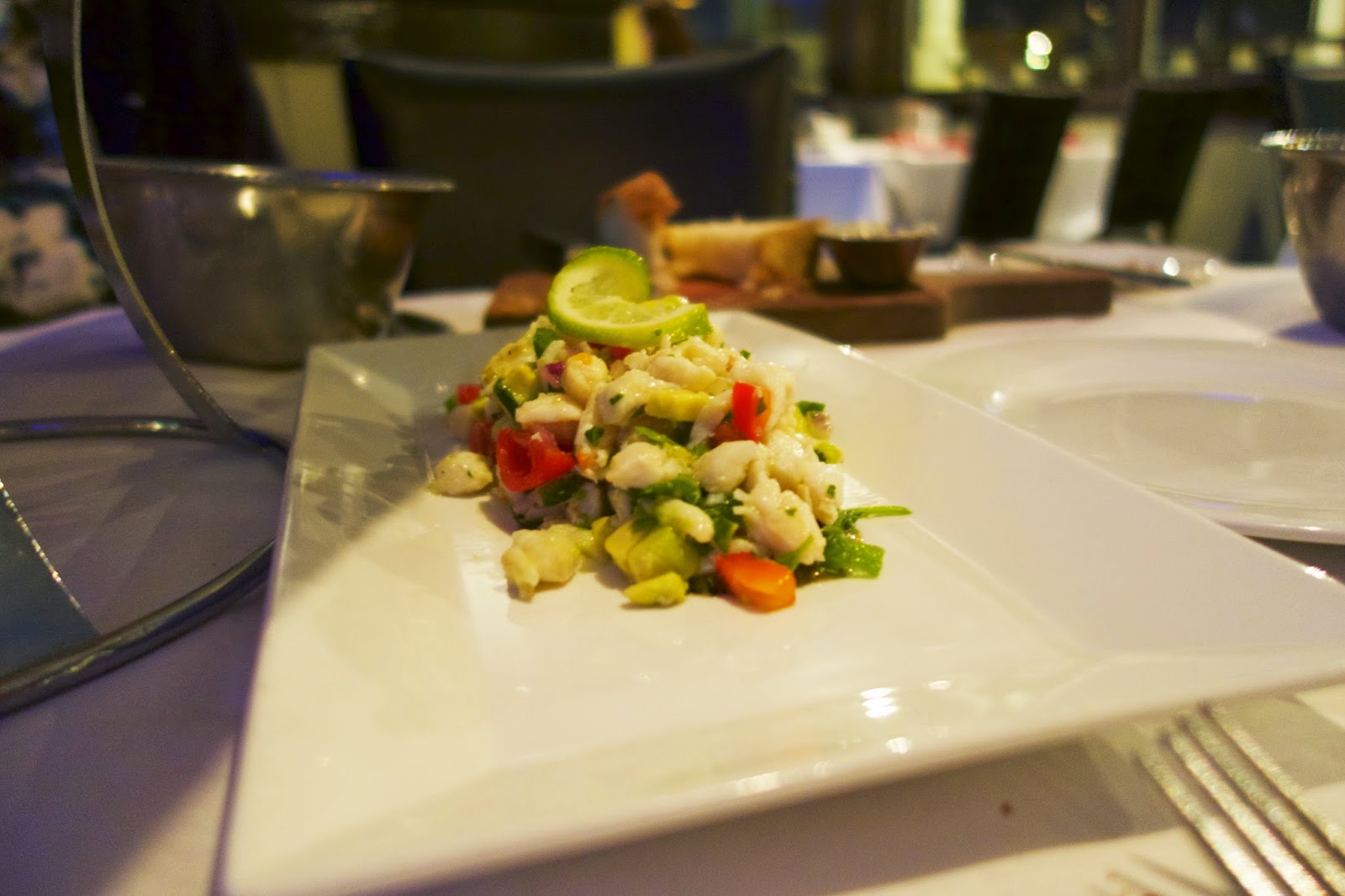 For our entrees, John got the Fresh Caught Local Grouper, Oscar style- house guacamole, artichoke, spinach and cherry tomato sauté. Clearly he loved it, because he ate most of it before I could snap a pic. You'd think he'd learn by now... ;) 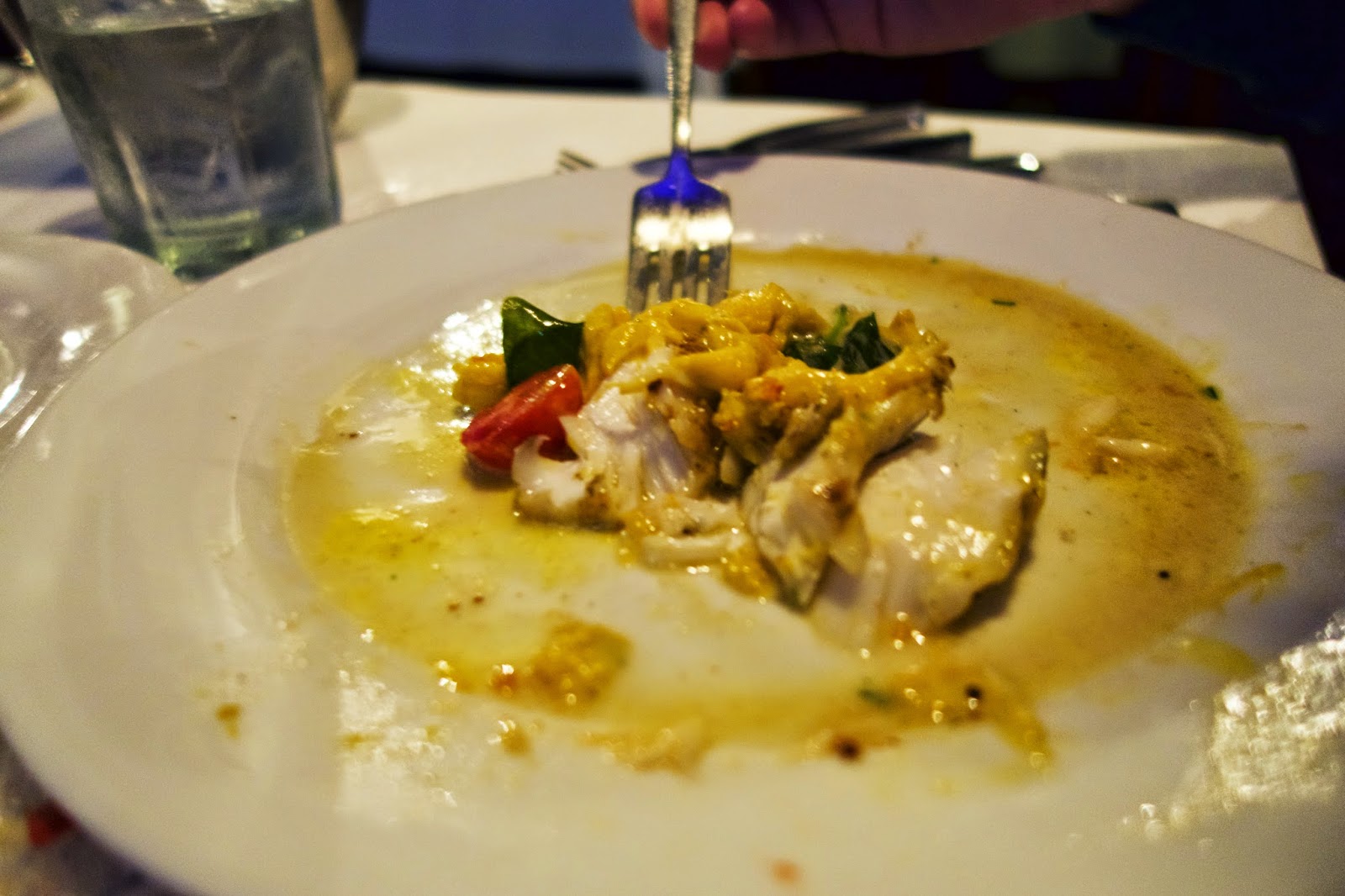 Mom and I shared a half pound of the Stone Crab claws, which were good, but for the price, we actually enjoyed the Alaskan King Crab legs better. 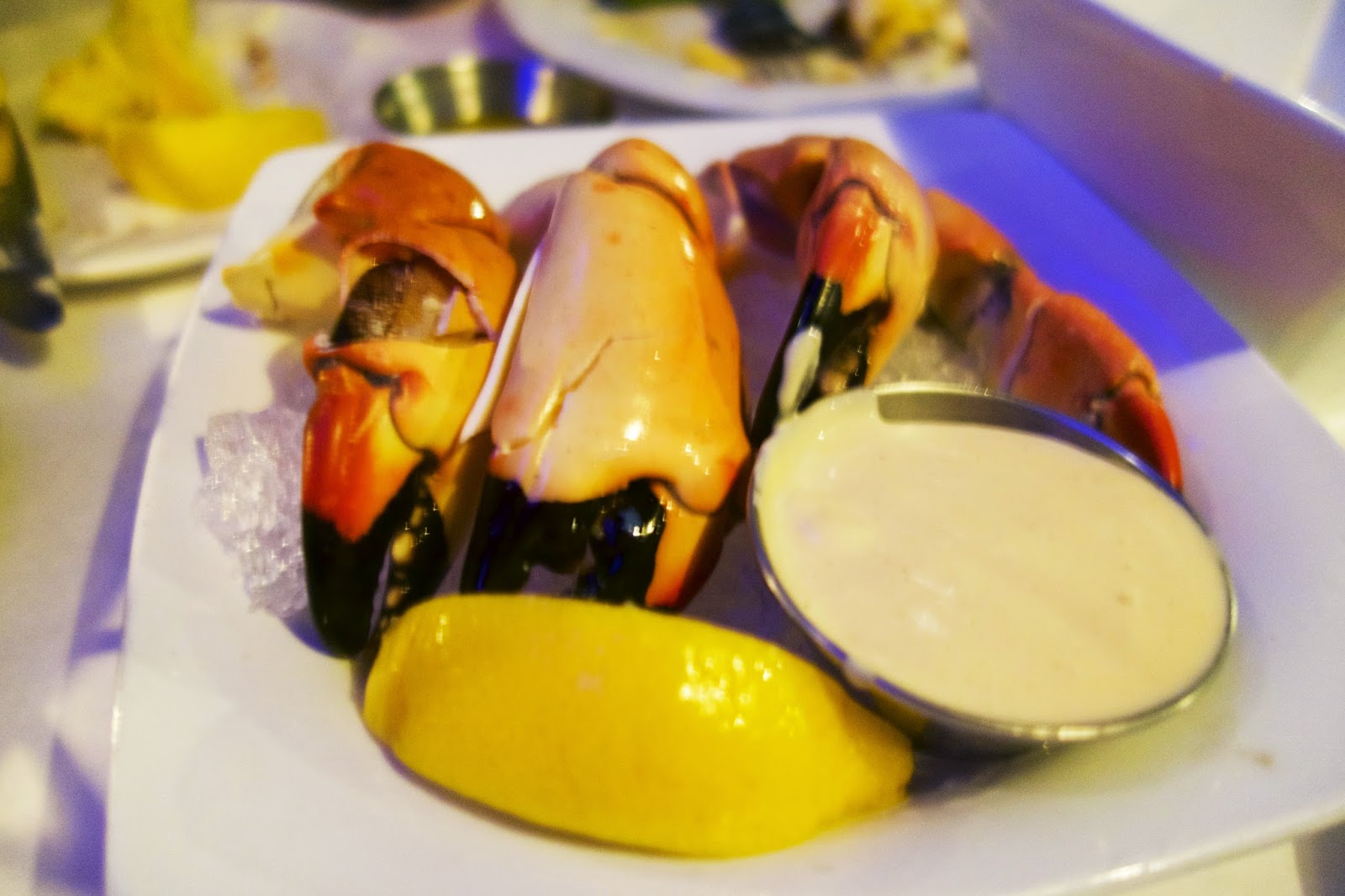 Finally, for dessert the three of us split the Key Lime Pie and Chocolate Creme Brûlée. These were both fantastic! 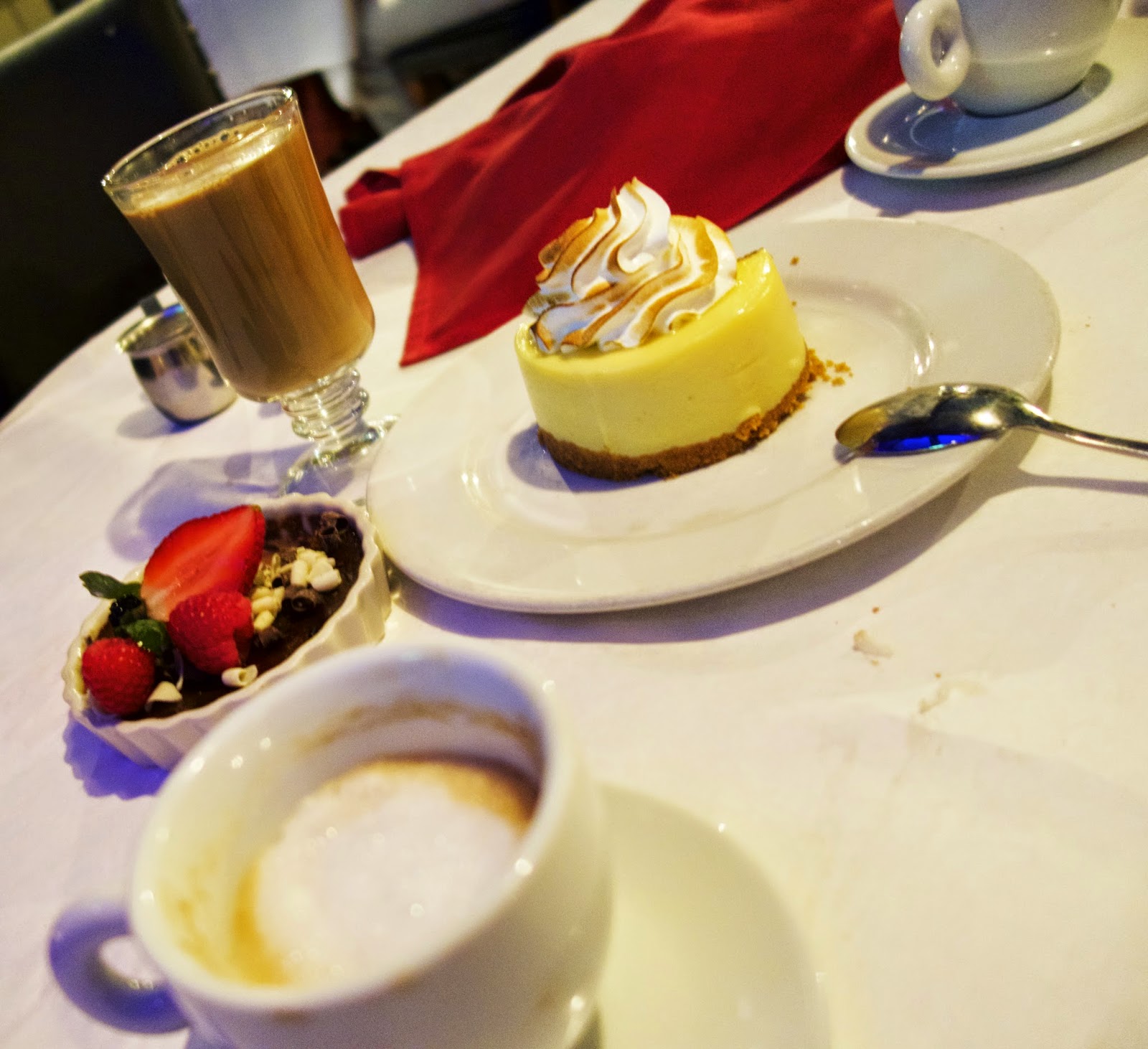 Here's a full view of the sweater coat. It's soft and cozy and the perfect layer for a cool Florida evening. 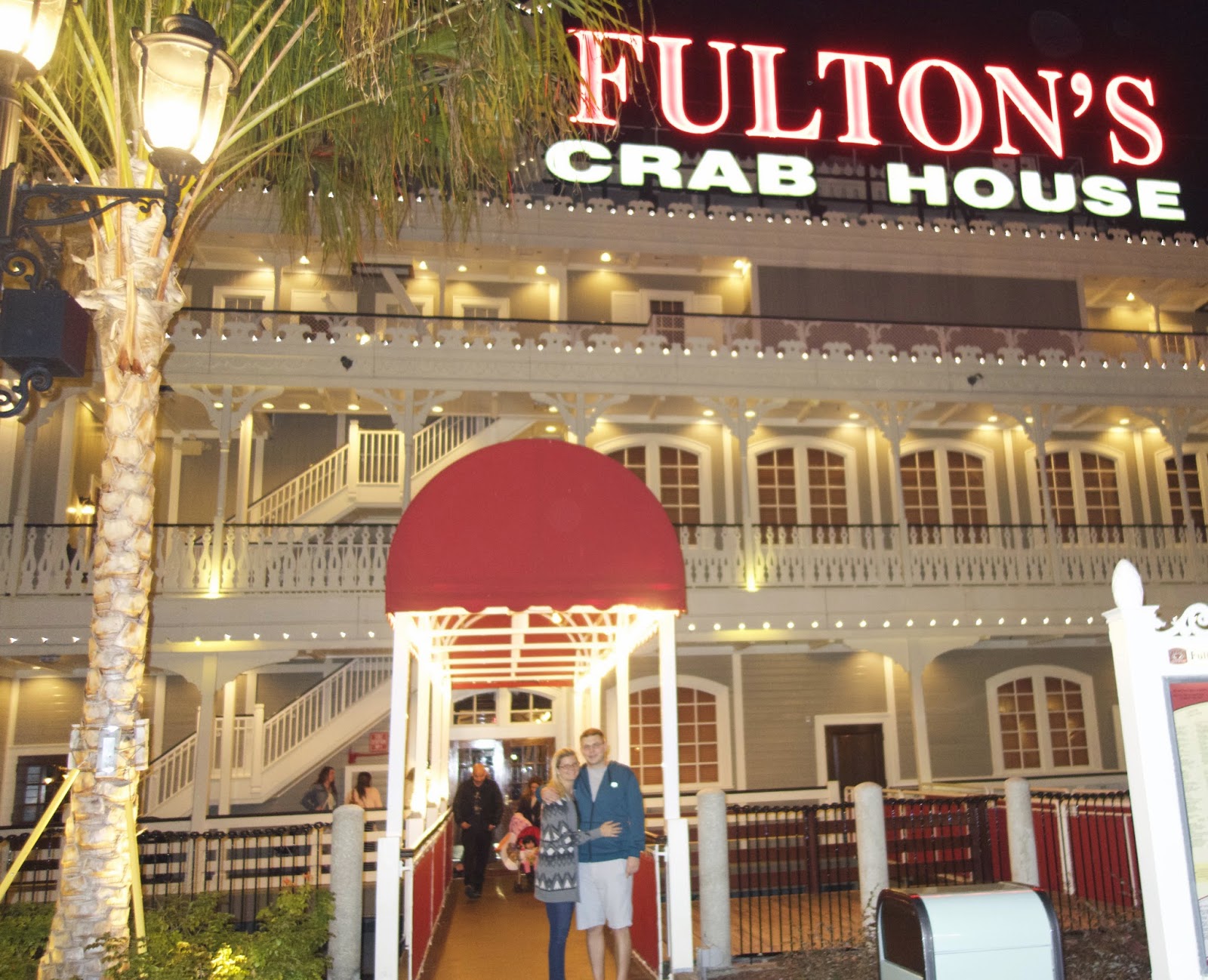 Fully stuffed, we headed home. What a wonderful weekend!

Did you follow along on our adventures through social media? If not, why?!? How was your weekend? Let me know in the comment section below. Thanks for reading!

Posted by Dressing for Disney at Tuesday, February 10, 2015